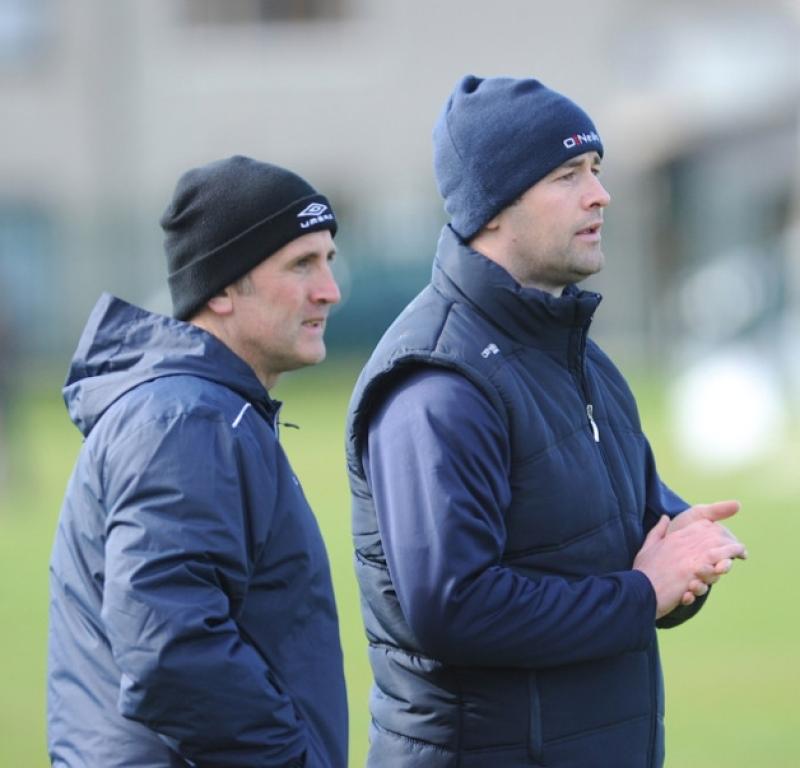 The drought has been a long one. Sean O’Mahony’s boss Brendan Nordon knows better than most. He was there the last time the Point Road side won an intermediate final in 1998.

The drought has been a long one. Sean O’Mahony’s boss Brendan Nordon knows better than most. He was there the last time the Point Road side won an intermediate final in 1998.

That afternoon in Haggardstown sixteen years ago, Nordon and O’Mahony’s saw off Oliver Plunketts to claim the Seamus Flood trophy and move up to the Senior Championship.

The immediate years after that win saw the club begin building brand new modern dressing rooms as the trappings of senior football looked to have rubbed off on the Point Road side. However they weren’t long for the top flight and were soon demoted back to the second tier.

The intervening years have been without much incident, bar an intense pining for top flight championship football. Yet Nordon is at the helm now, only last year did he finally decide to hang up the boots and concentrate on managing. It’s been a strange sensation to say the least according to the qualified actuary professional.

“It’s not the same as playing, I have to say,” admits Nordon. “It’s nerve racking, you have to make decisions, you have to disappoint fellas and probably having just played with most of the guys at some stage, you’re dropping friends.

“But the one thing I’ve liked about us this year is that when guys don’t start or get taken off they respond the right way, they work hard and try to do what they can for the club and that’s all you’re looking for.”

And they certainly had to work hard in the semi final, or semi finals more like. Against St Joseph’s, over the course of three nerve-shredding games, it could have gone either way - certainly not good for the heart.

“I thought we looked like we were going to throw it away,” reveals Nordon. “I thought we were winning reasonably comfortably in the second half and then we gave away a goal and a point. But you’re always going to do that because they are so sharp going forward and I’m just relieved after three games to get into a final.”

The three games have been applauded for the level of skill and entertainment.

“Both teams are footballing teams,” agrees Nordon, “and there was a great quality of football and score from both teams and excitement, maybe both teams were afraid to win it over the three games and look, we won by a point and that was the way it was and if the referee had played for another minute it would have been a draw - that’s football.”

While many of the Sean O’Mahony’s players will be feeling the pain after a gruelling and intense two week period, Nordon isn’t concerned with burn out and worries about playing too many games.

“I like matches, I always say that the more competitive games you play the more consistency the performance and guys get to understand their roles and we’ve been lucky enough with three or four games,” adds the O’Mahony’s boss.

Come Sunday it’ll be Drogheda versus Dundalk. St Fechins and Sean O’Mahony’s are hardly known to each other. Yet Nordon looks to that faithful year of 1998 and a previous championship encounter with the Termonfeckin side.

“In 1998 we beat the Fechin’s in the quarter final of the championship with a Willie Crawley goal in the last minute and I don’t think I’ve played them in the championship since then in a knockout stage,” remembers Nordon.

“We played them in the group stage a couple of years ago. It is novel. It’s the Drogheda region against the Dundalk region so we’ll see, hopefully the people of Dundalk will be out supporting us.”

Last Thursday night they finally ended the wait and sent St Joseph’s packing. Nobody wants it more than Nordon now. The semi finals may have captured the imagination, but it means nothing if they don’t go on and win Seamus Flood on Sunday.

“Having spoken to neutrals in the last couple of weeks, everyone is talking about the quality in the first game, the excitement in the second game and I thought in the third game there was both of those.

“This is our first final since 1998. It’s fantastic for the club. It’s important we win it. But for me its great to get back into a final and giving the people in the area a lift.”

The three semi finals highlighted something Nordon has been striving for for some time - consistency. There’s not much time now between last Thursday and Sunday to prepare for the final, it could be a blessing or a curse.

“I said to someone that if we had lost that game (Thursday) I wouldn’t have slept for a year and that’s probably true, you only get one chance. Last year I was in the dressingroom in my final year as a player and I was sick after the quarter final against the Joes, but we didn’t play at all that day. But over the last three games we played. If we lost I could stand with those guys, but we played championship and all you’re looking for is consistency and I think we did that and to get the win is great.

“We only have a week now and it’s a final and that could be a good thing or a bad thing depending.”

Hunterstown Rovers played Dundalk Gaels three times in an intermediate semi final in 1999 and won. They went on to win the championship too - a good omen perhaps?

“You can’t take anything for granted. You work hard, you try hard, you train hard and you play hard on the field and if you’re lucky enough, you win the game.” Amen.