Hero of the hour Finnegan kicks O’Mahony’s to glory 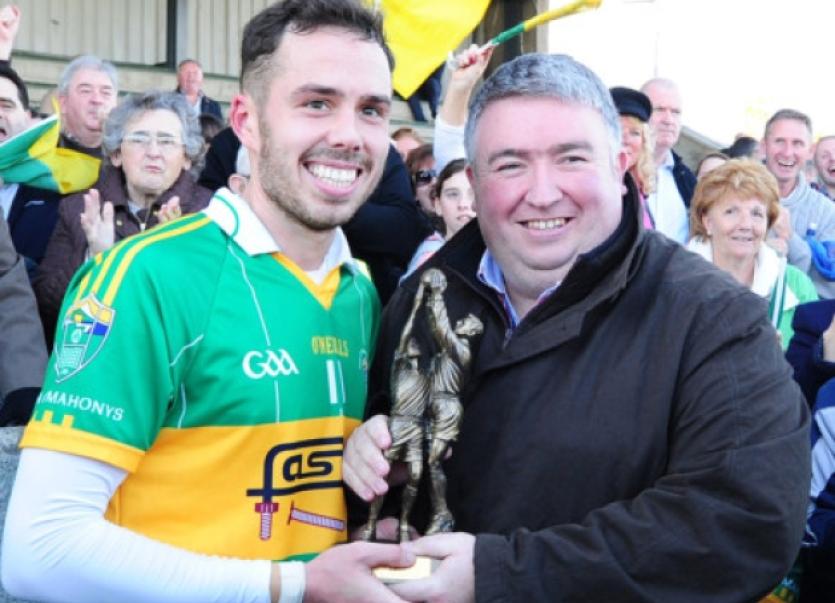 It hasn’t been a bad old week for Conor Finnegan really. A championship title on Sunday with his beloved Sean O’Mahony’s was topped off with a deserved Man of the Match award and then he was due to start a new job on Monday morning - he’s had worse weeks.

It hasn’t been a bad old week for Conor Finnegan really. A championship title on Sunday with his beloved Sean O’Mahony’s was topped off with a deserved Man of the Match award and then he was due to start a new job on Monday morning - he’s had worse weeks.

Afterwards, as the Seamus Flood trophy was safely in O’Mahony’s hands, Finnegan was certain he’d have to curtail the celebrations with that new career change in mind the next morning.

Still, if anyone deserved a pint for his efforts, it was Finnegan. But he’s a modest one is the O’Mahony’s forward:

“They (O’Mahony’s defence) kept them to 1-8, which is a very good score. John O’Brien, Mickey Clarke, all of them. Pat (O’Brien) was going around with four stitches in his eye after ten minutes, but he pulled through it and led by example,” added Finnegan.

“He’s a captain for a reason and he was absolutely phenomenal. Shane Brennan, Peter Nixon in midfield, everyone, it was a great team effort. I think they were tight in defence all season, so we knew it would be tough to break them down. But we broke them down pretty well today scoring 1-11. All over a great performance.”

With the strains of ‘We are the Champions’ wafting over the tannoy at Clan Na Gael Park, Finnegan recounted the previous sixty-plus minutes of the final. It was a game which only began with a bang in the second half.

“I thought in the first half we were very good. We played to our system and played very well. We regrouped at half time and came out and in the first five minutes we got ahead of them again. I think the goal nearly suited them more than it suited us, they had to come out and play. Then we lost a bit of composure.

“But then when it got back to a draw game, the chips were down and we needed to stand up and be counted, and we showed that in the last 10 minutes and we did what we needed to do to win it by three points in the end.”

Six points were his other reward for Sunday’s work. But to make them even sweeter at least three were from in or around the 45 metre range - wonderful accuracy and range.

There were still a few nails to be bitten before it was all over - especially when St Fechins came charging back in the third quarter. Finnegan felt his side conceded the advantage after their own early second half goal.

“I think when we got the goal we got complacent and relaxed and maybe we thought the job was done. They had nothing to lose and threw the whole lot at us. Our keeper went off with a black card, but I thought we showed great character to come back and to win the next ball and the next score and keep chipping away.”

Calm heads and even calmer words from the sideline worked a treat according to Sunday’s Man of the Match.

“Brendan (Nordon, manager) on the sideline was just telling us to chip away and chip away, but in the end we got the win and it’s just an incredible feeling.”

Not only will the Seamus Flood trophy take pride of place in the ‘San Siro’ for the next 12 months, but the prospect of Senior Championship football next year is an even bigger prize. Finnegan agrees whole heartedly.

“We’re back in the big time,” he exclaimed with joy. “We believe, knowing our league form, that we are well able to put it up to the big boys in Louth. I think we didn’t do ourselves justice playing in the Intermediate Championship. But you know, with the Joes game and this game, there was only the bounce of a ball in it. We’re back in Senior Championship, where we think we belong. I can’t wait.”

As is the way with these things, you can barely rest on your laurels when something else arrives soon after, This year, with the title in the bag, it’s a Leinster campaign for Sean O’Mahony’s - starting this Sunday. No rest for the victorious. Still, even Finnegan knows this one needs to be enjoyed - even if they have to return to the training pitch come Tuesday.

“I have to start a new job on Monday morning. So I can’t even go too mad. But we’ll enjoy a few drink and start again on Tuesday night. We’ll have a good night tonight and take it from there.”