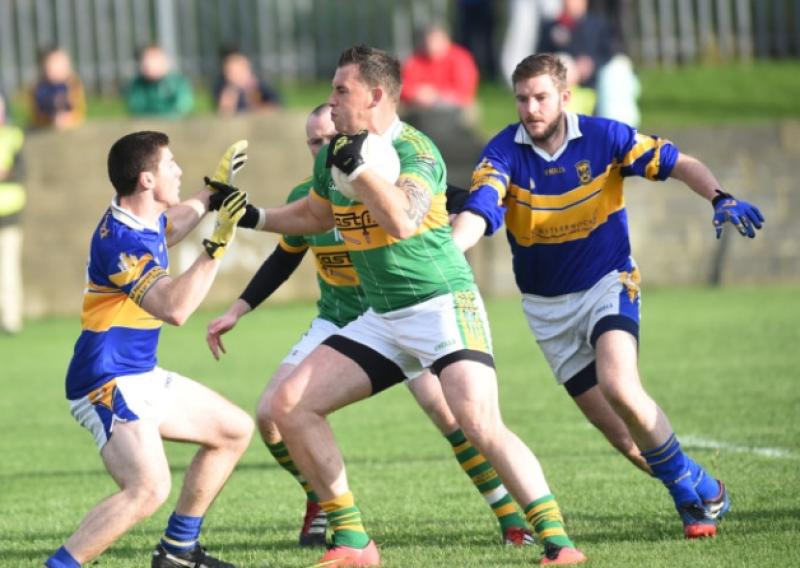 Eadestown from Kildare have had a remarkably similar year to Sean O’Mahony’s. When they saw off Round Towers in early October to win the Kildare Intermediate Championship it was their first success in 18 years - just two years longer than the Point Road side’s own long wait.

Eadestown from Kildare have had a remarkably similar year to Sean O’Mahony’s. When they saw off Round Towers in early October to win the Kildare Intermediate Championship it was their first success in 18 years - just two years longer than the Point Road side’s own long wait.

Eadestown, nestled between Naas and the border with Wicklow, had strived for a long time to make that jump up to senior level.

In that final, several weeks ago, Kildare star Emmet Bolton effectively ‘jumped on the grenade’ at the very end to save the day. His side were leading by two points with thirty seconds left and Bolton quickly realised that the incoming Round Towers forward, just 40 yards from goal, was going to score. He checked the forward’s run illegally and received a black card - but it was worth it. The ensuing delay killed the remaining time off and Eadestown went on to lift the trophy.

Last minute winners and late game-changing incidents are something both Sean O’Mahony’s and Eadestown are used to. If you were a betting man you’d suggest that this Sunday’s semi final clash will go all the way to the very end - mind you, you wouldn’t receive great odds on that in fairness.

The venue of Clan Na Gael Park is a massive asset for Sean O’Mahony’s though, they have made themselves at home on their great town rival’s pitch this year and knowing it so well and having scratched out results there at times when they had no business doing so will be akin to having a 16th man come Sunday afternoon. It’s hard to emphasise just how important that will be.

Add to that the fact that Eadestown had a relatively easy match in their first Leinster outing against Railyard of Kilkenny - winning by 2-15 to 0-2. It was an expected end result against a poor team. O’Mahony’s on the other hand have two hard-fought wins under their belts against Caulry and Castleknock - they are battle-hardened in comparison to their Kildare opponents.

Saying that, Eadestown arrive with some big names among their ranks. Aforementioned county star Emmet Bolton is their stand-out. At 28-years-old the versatile half back is in his prime and a match for any player in the country. Nominated for an All Star in 2011, Bolton has enough experience to lead his side come Sunday.

Another Bolton, a younger brother of Emmet’s, is one of their main target men. Cian Bolton, at full forward, has been in sparkling form this year for Eadestown. At just 23, he has broken into the county side and Louth fans would have seen him line out with the Kildare Juniors against the Wee County just last year.

The Kildare side are managed by the vastly experienced Dessie Brennan. A Laois man by birthright, Brennan has plenty of history in Kildare having led Moorefield to two senior finals in 2007 and 2008.

Between the white lines he captained St Joseph’s to their first Laois senior title in 1973 and snapped up a further five county medals along the way. Brennan also contested three Leinster club finals. His pedigree and experience are not in any doubt. On the intercounty front he represented Laois between 1971 and 1983 and lined out against Offaly in the 1981 Leinster final.

An attacking side with a tendency to leak goals, Eadestown play the game with plenty of élan.

Sean O’Mahony’s are facing a team that will really have a go at them for the first time since their county semi-final saga with St Joseph’s.

There will be fireworks.