A first for
St Fechins 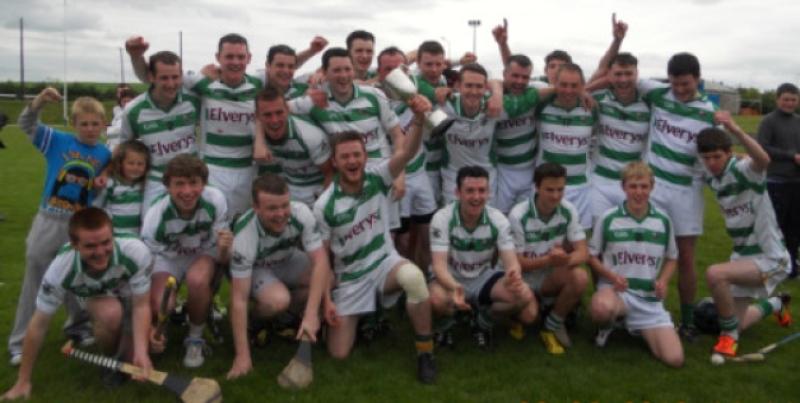 A little piece of history was made at Pairc Ui Mhuire in Dunleer on Sunday afternoon when the senior hurlers of St Fechins captured their first ever Louth adult hurling trophy with a well earned victory over Mattock Rangers in this final of the Special Hurling Championship.

A little piece of history was made at Pairc Ui Mhuire in Dunleer on Sunday afternoon when the senior hurlers of St Fechins captured their first ever Louth adult hurling trophy with a well earned victory over Mattock Rangers in this final of the Special Hurling Championship.

In the process they were denying Mattock a ‘Special’ (without county players) competition double this season after they had captured the Special League in early May.

It was the Collon outfit who made the brighter start to this match when Johnny Matthews fired over an early free followed soon after by one from play by corner forward Niall McEneaney.

That score would turn out to be Mattocks last score of the half as the Fechins went on to score seven points in a row.

The first of these was scored by midfielder Peter Doran followed by further scores from Wayne Treacy, Cathal Ryan (2) and Barry Devlin to leave them in front by double scores 0-6 to 0-3 on 18 minutes.

They extended their lead with the first two points on the resumption, firstly from play by Doran and a free from David Stephenson.

Mattock to their credit responded with good points from Niall McEneaney and Johnny Matthews to keep themselves within touching distance of their opponents on 38 minutes.

A minute later the Fechins sensed that this might be their day when a ball in from the left wing by Cathal Ryan was misjudged by keeper Ruairi O Reilly ending up in the back of his net.

On 43 minutes a terrific close range volley from Brian Carter revived Mattocks hopes as they now trailed by 1-10 to 1-5.

The Termonfeckin outfit however continued to create to better scoring opportunities and were rewarded with points from Barry Devlin and David Stephenson (free).

The sides shared the next two points before points from veteran Tony Corcoran and Declan Madden (free) left still five points between the sides 1-13 to 1-8 with under five minutes remaining.

Mattock had to play out the last few minutes with fourteen men when Johnny Matthews was sent of by the referee for a dangerous pull.

Afterwards the Maurice Murphy Cup was presented to the St Fechins captain Cathal Ryan by Co Board Chairman Padraic O Connor alongside members of the family of the late Maurice Murphy, his son Maurice Murphy and grandson Alex Murphy.