‘All roads lead
to Drogheda’ 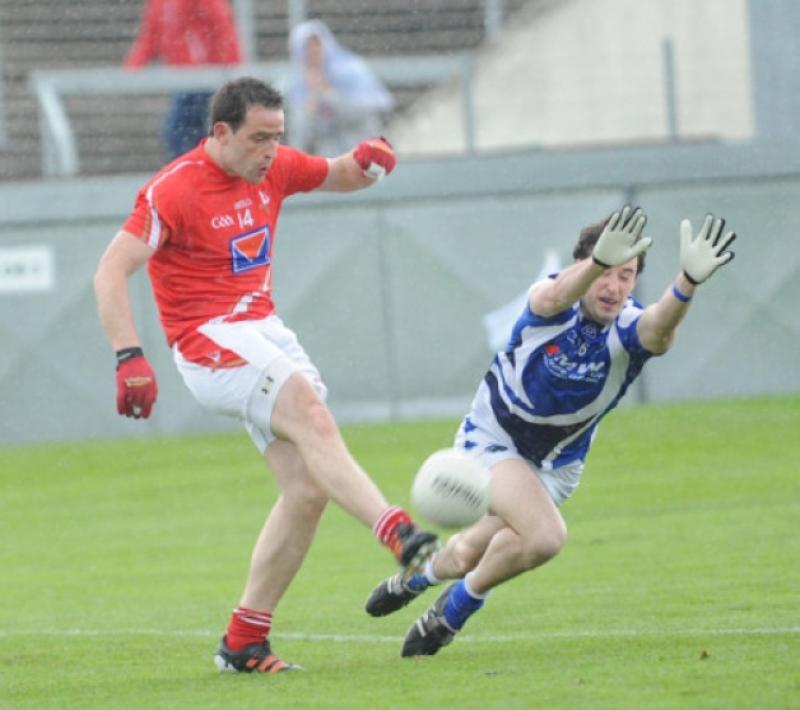 Against Laois two weeks ago Louth dominated the high ball. Time and again Paddy Keenan and Brian Donnelly snatched the ball or fisted it down to a waiting team mate.

Against Laois two weeks ago Louth dominated the high ball. Time and again Paddy Keenan and Brian Donnelly snatched the ball or fisted it down to a waiting team mate.

The man who did more than most to ensure that this happened repeatedly was goalkeeper Neil Gallagher.

The Cooley net-minder’s distribution so far this year has been excellent. And on that Sunday in Portlaoise he was able to clip the ball with apparent ease into the middle of the field with pin-point accuracy for Keenan or Donnelly to retrieve.

But it wasn’t just the accuracy that made it effective. It was the speed at which Gallagher was able to pick out the free man and change his approach. The Louth number one explained that the kick out has become an essential tool of the modern game.

“I suppose with goalkeeping nowadays there’s a lot of emphasis on the kick outs. It’s nice to be able to work on it every week in training and try and win the possession of the ball.”

In front of him that day was a debutant in the shape of John Bingham. Gallagher had nothing but praise for the way the Ardee St Mary’s man conducted himself.

“John’s a good lad. He played very well in that game. But he’s been around for years and he was like a duck to water I suppose. He’s been going well in training and he took his chance.”

The league game against Wexford earlier this year was a bitter disappointment for Louth according to Gallagher. Two early goals in that game punctured the Wee County’s chances of victory. The Cooley man knows Wexford will be full of confidence when they arrive in Drogheda.

“They’ll be coming up here with no fear, obviously enough. They know the surroundings. The least time they were here they gave us a bit of a lesson in the league. But hopefully we’ll be well prepared for that.

“Goals win games and they got them at the right time that day. There was a strong breeze blowing and we just couldn’t claw it back. We were really disappointed and sort of felt sorry for ourselves, but hopefully we’ll learn from that.”

The confidence this year has been very high within the Louth camp. And the win in O’Moore Park has only added to that growing sence of optimism.

“The confidence levels are very high, naturally enough after any championship victory really. Winning always brings confidence to the team and we’re looking forward to Sunday’s game. Laois is done now, we move on and focus on Wexford.”

For their part Wexford have had relatively good form in the Leinster championship over the last few years. It’ll make Sunday’s game a tough proposition.

“They’ve plenty of good forwards. Wexford have done well in championship football recently even though they’ve been playing division three football they’ve gotten to a couple of Leinster Finals and were very unfortunate against Dublin. It’s not going to be easy.”

One thing Louth teams have been accused of in the past is an inability to be consistent when it came to the championship. Last year was a perfect case of that. Gallagher revealed that the panel are keen to put that accusation to bed.

“We spoke about that as well. We’ve been a flash in the pan at times – a good performance here and a bad performance there. We’re just looking for a bit of consistency now. Look we’re not looking past Wexford now and hopefully we’ll get the right result on Sunday.”

Getting that result on Sunday is swaying the way of the Wee County, if some bookies are to be believed. The Louth keeper is simply concentrating on the Wexford match and any thoughts of added pressure are far from his mind.

“I don’t know what way the bookies have it and I’m not too interested either. But we went to Laois and felt we were in a good place and that we could take them and thats what happened. That’ll be the same on Sunday.”