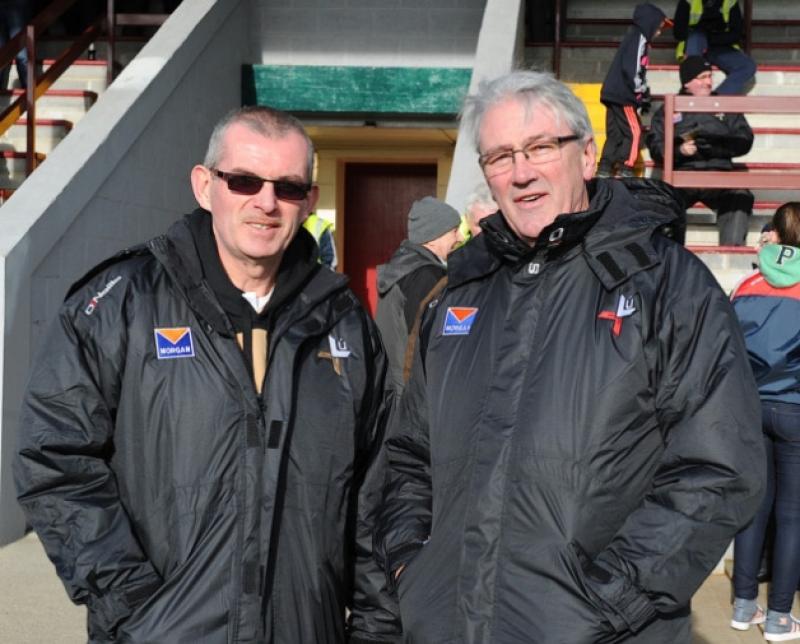 The first question was direct and the most obvious one: “Were you disappointed not to have won that game?” The response from Louth boss Aidan O’Rourke was curt: “Yep”.

The first question was direct and the most obvious one: “Were you disappointed not to have won that game?” The response from Louth boss Aidan O’Rourke was curt: “Yep”.

After a brief pause; which felt like an eternity, the Armagh man found his stride, worked his words into sentences and seemed to come back on track.

“It’s very frustrating”, he began, “to put ourselves in that position, we were maybe eight up with sixteen or seventeen minutes left and we stopped and too many fellas I think thought the game was won and somebody else would close it out and we didn’t do the all things we did to get us there and it’s very very frustrating.”

O’Rourke’s annoyance at the way his side collapsed was all the more heightened by the fact that he knew his side were much the better of the two teams on the field in Drogheda on Sunday. For longer periods they were streets ahead of a clueless looking Armagh outfit.

“As soon as we took our foot off the gas, a good team as Armagh are are going to come at you, so it’s frustrating that we allowed them back into the game, but this is such a tough division and the quality is so good across the board that if you don’t play for seventy minutes and drop your level and intensity then every team is going to come at you.”

A dropping of intensity levels led to a switch in momentum at a crucial time in the match. The Wee County may be disappointed to have come away with just the one point, but they might have left that behind too if Armagh had converted a late chance.

“I think if the ball had been kicked out again we very likely could have lost. Momentum is a serious thing in gaelic football and losing momentum is seriously hard to turn around again. And we didn’t learn that today”, stated O’Rourke.

“We were in strong positions in the league last year and didn’t finish out. We thought we’d shuck that off in the championship last year. Probably game back to us against Kildare in the qualifiers, we were five or six up against Kildare and failed to close the game. So we’ve a serious habit of patting ourselves on the back and waiting for the game to be finished, and that doesn’t happen at this level.”

In the immediate aftermath of the game, there were those who pointed to a crucial double switch that Louth made with twenty minutes left as being of some importance. But O’Rourke explained the withdrawal of Declan Byrne and Derek Maguire.

“Declan is a good footballer. I don’t think he’s got himself to were he can produce seventy minutes at this level yet. But he’s a great addition to the squad. With the state of the pitch, being very heavy with all the rain there has been and the pace of the game, we needed fresh legs in the second half. In fairness all the young fellas on the bench have been doing really well for us and there’s a lot of pace in those guys and that was the day for them. We didn’t give them any pace when they came on unfortunately.”

Asked if he was surprised with Armagh’s early poor showing, O’Rourke dismissed any talk of Armagh’s performance and concentrated instead on his own team, and in particular, the mentality of his players in the last quarter.

“There’s tactical things you have to watch for and keep an eye on what they’re trying to do, but from our own perspective we knew we were the better team and we knew going into the game that if we played our game and did the things we were supposed to do then we’d win the game and so it was for 45 or 50 minutes.

“But you don’t beat anybody hanging on for twenty minutes at the end. And I don’t think we got a score in the last fifteen or sixteen minutes. We were ‘parking the bus’ was the mindset of some of the players and that doesn’t win games in this division.”