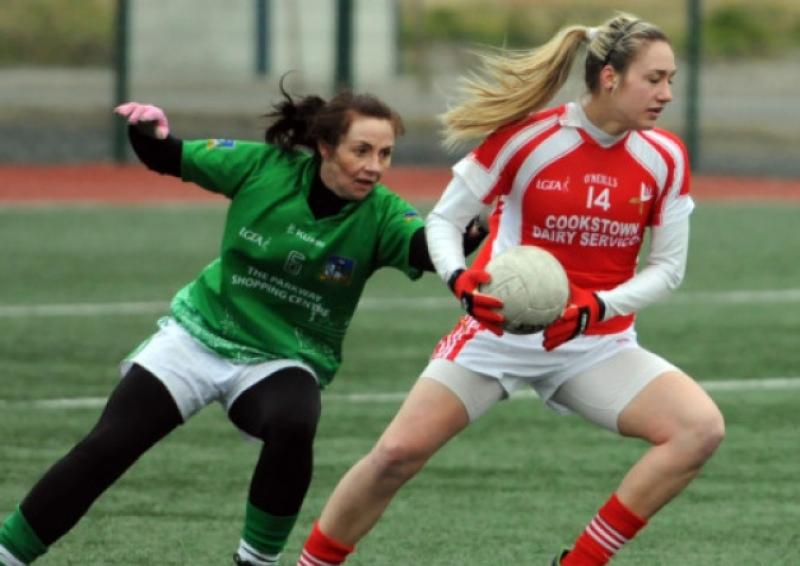 The Louth Ladies faced off against Limerick in Dunganny Co. Meath on Sunday, however the Wee County were unable to close out a victory as an almost unplayable wind blew across the pitch.

The Louth Ladies faced off against Limerick in Dunganny Co. Meath on Sunday, however the Wee County were unable to close out a victory as an almost unplayable wind blew across the pitch.

Limerick had the first attack of the match, charging down the right hand side of the field, but their endeavours were thwarted by an organised defensive effort by Louth which culminated in a fantastic block by Sandra Lynch.

Instantaneously, defence was turned into attack, as a long ball found Kate Flood who, following a one-two with Susan Byrne, slotted the first score of the game over the bar from 20 yards.

Both teams struggled, as the wind pulled a vast majority of passes were dragged wayward by the wind. As a result neither team could get a real grip on the game. 8 minutes in Limerick created a goal chance, as a long shot dropped into the square and although the ball bounced favourably for Limerick’s Clodagh Reilly, Bronagh McGrane managed to get a hand on the ball and reinstate calm among the Louth defence.

From the kick out Louth worked the ball out to Kate Flood just inside the Limerick half. A low and well faked pass opened up space for Grace Lynch to find Susan Byrne on the forty yard line.

Taking a step back she drew on several Limerick defenders before releasing Jenny McGuinness to score Louth’s second point of the game.

Limerick got on the score board from a free kick won in midfield was driven long into the full forward line and turned wide to Mai Kennelly to score a point.

Louth’s reaction was fast Eibhlin Rice powered forward after doing well to win a long ball, but was pulled down by desperate defending by her marker. Kate Flood was on hand to convert the free kick.

Louth managed to turn a Limerick attack into a quick counter attack with the Louth full back Michelle McMahon pounced on the loose ball and quickly recycled the fumbled possession into attack, but unfortunately the shot from Kate Flood was caught by the wind and drifted wide.

Limerick scored two unanswered points, as they began to get to grips with the gusting wind and settle into the game.

As a Louth attack failed to materialise, Limerick charged into the Louth half, but a 50 yard defensive dash by Sandra Lynch forced the Limerick half forward off balance and the resulting shot skewed wildly to the right and wide.

The resulting kick out found Jenny McGuinness who scored a fantastic 25 yard point just before the whistle was blown for half time.

The start if the second half started much in the same vain as the first as both teams took time to get used to the wind again. Limerick’s Niamh Richardson drew a foul from Sandra Lynch and the free kick was quickly taken for the first point of the half.

Louth got off the mark as Micheala O’Doyle rose highest to meet a firmly struck ball from Grace Lynch, and coolly palmed off the ball to Kate Flood who drove another point over the bar.

Limerick won the kick out but a vigilant Louth defence defended in groups forcing Limerick players to over carry and forcing the free kick. Limerick scored two unanswered points, both from dubious free kicks from 13 yards.

Great work from Jenny McCourt to win a loose ball resulted in Louth’s last point of the game, as the ball made its way to Kate Flood who put it over the bar once more.

Limerick got another free kick from 13 yards which brought the game level, and a point in the dying minutes of the half sealed the victory for Limerick