Brennan has one eye on Pat’s 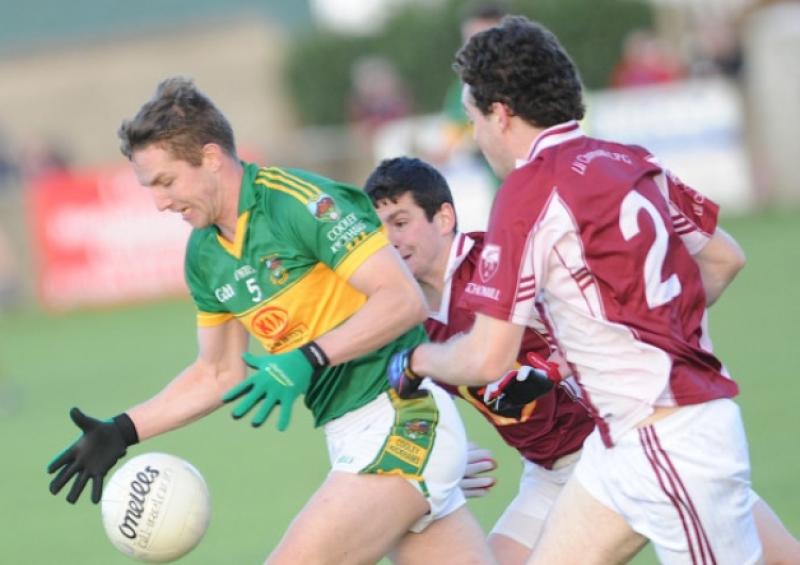 He’s not exactly renowned for his scoring exploits. As a corner back Richard Brennan doesn’t get to venture too far up the pitch, usually anyway. On Sunday, in Dowdallshill, the Cooley defender hit a goal and two points.

He’s not exactly renowned for his scoring exploits. As a corner back Richard Brennan doesn’t get to venture too far up the pitch, usually anyway. On Sunday, in Dowdallshill, the Cooley defender hit a goal and two points.

His regular sprints up the field that evening yielded some important scores. For his team and himself. Tactically Cooley knew they had to stop O’Connell’s getting on the ball and using the possession.

“O’Connell’s are always good when they get the ball into their hands and we knew that. In the second half we had the wind. And when we went down to fourteen men they did that and it made it a bit awkward for us. Thankfully we held on and got the win in the end,” explained Brennan.

A key part of the Cooley plan was to play into the wind in the first half. It put a lot of pressure on them initially. But it was something they had worked on, according to the Cooley defender.

“We played against the wind against them in the league and we were five points down after maybe fifteen minutes, but we knew then if we kept digging then we could do it. So we put some thought into it and went against the wind if we won the toss.”

The turning point in the game occurred when his side were awarded a penalty for a foul by Stuart Reynolds on Ciaran Sheelan. Brennan felt it was blatant and deserved.

“It was clear cut to be honest. But it’s good to get them when you get them. Because we haven’t been getting too many of them.”

That penalty certainly swung the game in Cooley’s favour, but victory came at a cost for the Peninsula side. The loss of the influential Patrick Sheelan to a straight red has ended his hopes of playing in the final in Drogheda on Sunday September 29.

“I didn’t see what happened”, stated Brennan, “the boys said he hit a shoulder, but I didn’t see it. It’s unfortunate for him. He’s been having a good season up until now. But we’ll just have to do it for him now.”

Conor Rafferty came off early on Sunday with his knew heavily bandaged. Afterwards he left Dowdallshill on crutches. He is now a very real doubt for Cooley. But Brennan will remain hopeful and he is confident his side have strength in depth.

“Conor Rafferty is after hurting himself. We don’t how bad that is, but again hopefully we can cover it. We’ve a big enough squad anyway.”

The previous night, the Cooley team went to watch one of their potential final opponents in the Newtown Blues v Pat’s match in Castlebellingham.

On day one this year Cooley were beaten convincingly by Pat’s. The holders displayed their ability to push up a gear and blow teams away that day.

But you get the feeling that although they wouldn’t mind who they got, a final against the noisy neighbours.

“I was at the game last night. I thought a draw at the end was a fair result. Pat’s won the first half and the Blues obviously won the second half. In the end it could have gone either way. But they live to fight on Friday, so we’ll have to sit back and wait”, he added.

“It doesn’t bother me at this stage. I think we need another crack at the Pat’s. But we’ll take anyone,” Brennan added with a knowing smile.