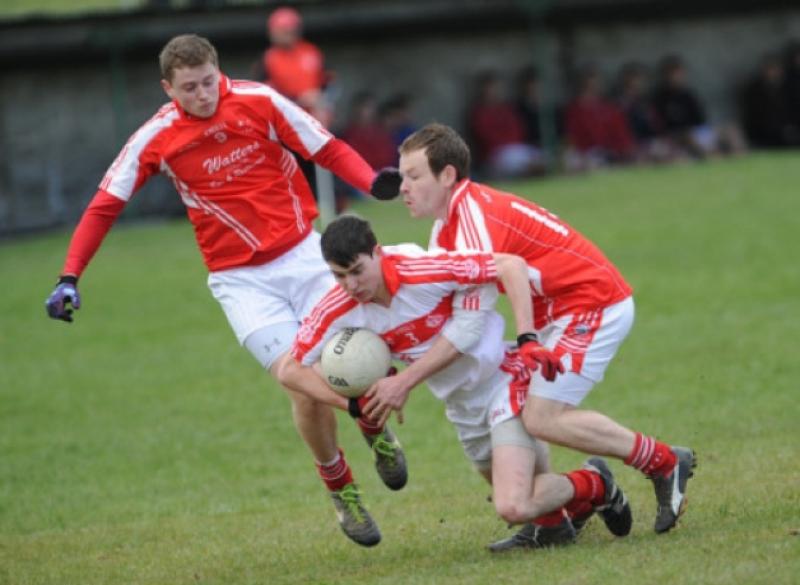 Despite the bitter cold cross wind this was a very entertaining game played at a hectic pace throughout and it was only in the third quarter that the result became clear.

Despite the bitter cold cross wind this was a very entertaining game played at a hectic pace throughout and it was only in the third quarter that the result became clear.

Fechins opened the scoring with two early points from Bevan Duffy and Ronan Holcroft and were guilty of over elaboration that should have been turned into scores.

Jim Mc Eneaney opened Gers tally on ten minutes and they got their first goal just before the break when James Craven gave the Fechins keeper little chance from close range. Half Time Score - Geraldines 1-3, Fechins 0-4.

The home side levelled with two quick points within as many minutes. Points from Mc Eneaney, Barry Hamilton and Michael Rogers gave the visitors a cushion with only a single point from Jamie King in reply.

The turning point in the match was a well taken Jim Mc Eneaney penalty on forty three minutes but Fechins were living dangerously earlier when a screaming shot went just wide of the post.

At this point Gers were in control at centre field, but Fechins fought hard to get back into this game but the loss of their midfielder Bevan Duffy was a big blow. The Haggardstown men added a further three points followed by a late fisted goal from Barry Hamilton.

Fechins added a point followed by a well taken goal both from Holcroft but could never move the ball upfield fast enough to threaten the Gers defence.

All too easy for Mary’s

This result was never really in doubt as the Ardee men continued their great start to the league season.

This defeat leaves Naomh Malachi firmly rooted to the foot of division two at this early stage.

The standout perfromer for St Mary’s was Louth star Darren Clarke, who helped himself to eleven points during the game.

Anthony Martin did raise some hope for Naomh Malachi when he raised the green flag in the first half, however the North Louth men were well behind at half time - 0-9 to 1-1.

The second half was a non-event as St Mary’s hoisted over eight more points to seal an easy win.