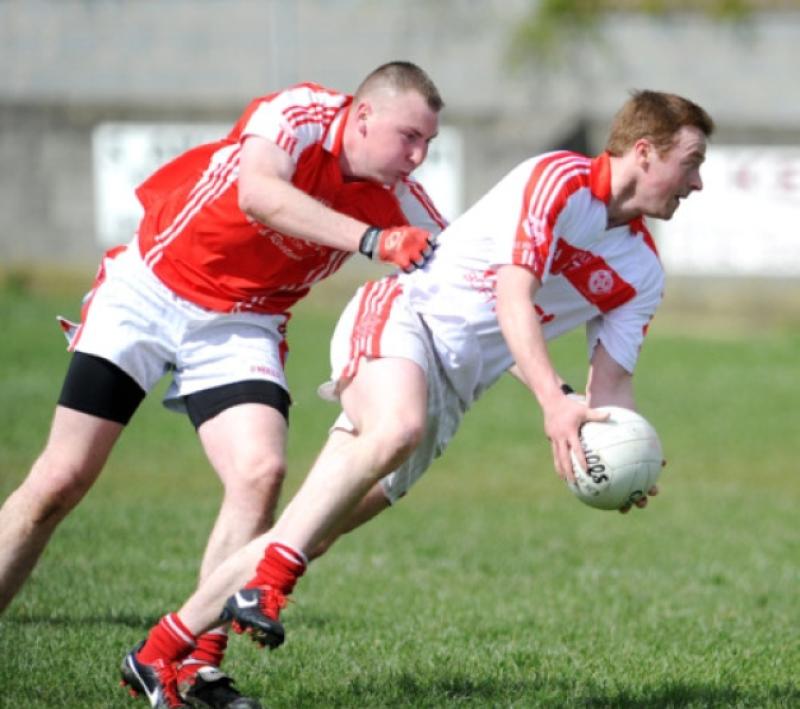 It took a late point from Glyde’s Ciaran Sheridan to earn Rangers a share of the spoils in this entertaining clash at Clan Na Gael Park on Friday night.

It took a late point from Glyde’s Ciaran Sheridan to earn Rangers a share of the spoils in this entertaining clash at Clan Na Gael Park on Friday night.

Drew Duffy was on hand to fire over a point at the end of normal time, which looked to have sealed the win for Clans, but the Tallanstown men looked to Sheridan to rescue the draw in added time.

Three early points against the wind set the home side on their way in the first half, even though the wind was not in their favour.

Yet the Glyde men battled back and derservedly led by 0-8 to 0-4 at the interval.

Needing to up their game Clans took the game to their opponents in the second half and scored four of the first five scores available. it was nip and tuck all the way, but a point apiece was fair result in the end.

Rock men off the mark

A goal seperated these two sides, with Na Piarsaigh recording their first win of the league campaign and sending Mochtas to the bottom of the table in the process.

This was the Louth Village team’s third defeat on the bounce and they are well adrift of the pack already at this early stage.

Declan Byrne looked to have set Mochtas on their way with an early point. But David Boyle levelled the clash for Na Piarsaigh soon afterwards.

T he Louth Village men took a firm grasp of the game thanks to four unanswered points, however David Boyle hit the back of the net just after twenty minutes to close the gap once more.

It got better for the town team soon afterwards when Mochtas were reduced to fourteen men due to a sending off. Na Piarsaigh wnet in ahead by a point at the break.

Once again the Louth Village men looked to Declan Byrne for inspiration and he duly obliged with the levelling score of the clash.

As the game drifted on both sides battled for the upper hand, but some late points from Na Piarsaigh handed them the two points.