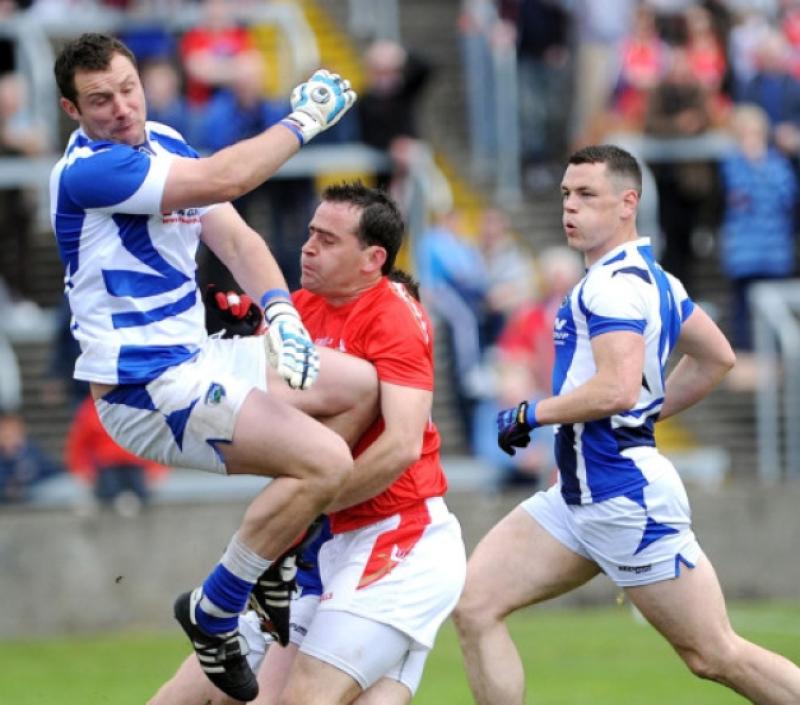 If the league clash between these sides back in early march was a case of shadow boxing ahead of this championship blockbuster, then Aidan O’Rourke’s Louth side landed an extraordinary knockout blow on Sunday in Portlaoise.

If the league clash between these sides back in early march was a case of shadow boxing ahead of this championship blockbuster, then Aidan O’Rourke’s Louth side landed an extraordinary knockout blow on Sunday in Portlaoise.

That Paddy Keenan, Brian Donnelly and Adrian Reid were able to toy with the Laois midfield with five minutes to go says something of the margin and authority of this commanding victory.

Keenan and his midfield companions simply fist passed the ball from one side of the park to the other as the home side chased their tails. In the end, the ominous threat of John O’Loughlin also went up in smoke when the Laois man received his marching orders in the dying seconds. It summed up his game, and Laois’ perfectly – rudderless, directionless and lacking in any cohesion.

But lets not take anything away from this Wee County performance. With Brian White kicking frees and 45’s with Zen-like ease and Shane Lennon bursting and hacking his way around Laois’ back line, Louth looked the real deal.

Having spouted on about his complete focus on the championship from day one, Aidan O’Rourke backed up his promise with a complete performance which should bring heart to all Louth fans ahead of the arrival of Wexford in the Leinster quarter final in two weeks time.

That game may indeed prove more of a handful than this opening away day, and afterwards on Sunday O’Rourke was quick to warn all concerned that his side could be taken apart by any team if they don’t show up and put in an equally all action performance next time out.

Yet Laois were bad on Sunday. Not just in their physical application to the game but in their mental approach.

From the start they over-played the ball in the final stages of their counter attacking moves and options were almost non-existent when they needed a simple off load to continue the charge.

Laois boss Justin McNulty will have to answer some stern questions about his approach to this match and the fact that his troops seemed uneasy and awkward in what little they did do in O’Moore Park on Sunday.

For O’Rourke comes vindication in his left field team selection. The inclusion of St Mary’s man John Bingham at corner back caused a collective shrug and scratch of the dome when the team was announced on Tuesday evening.

Yet when Bingham surged up the right side of the park on Sunday and clipped over a fabulous point after just twelve minutes, you got the sense that O’Rourke permitted himself a brief smile at that moment. Bingham carried out his defensive duties with equal aplomb and his championship debut could arguably be placed in the ‘Dream Drawer’ for future reference.

Ciaran Byrne, the great white hope of Louth football also made his championship bow at corner forward. Although he may not have had quite the first day as Bingham, it will serve him, and Louth, well to have him blooded in this clash.

However, Sunday’s match was anti-climactic in many respects. The previous league clash had prepared many for a muck and bullets battle to the bitter end. That type of occasion never materialised as Louth simply cruised past the O’Moore County.

A promising start which saw the Reds race into an eight point lead when Shane Lennon cleverly fisted a selfless Derek Maguire pass into the net, eventually became a nine point one as half time arrived.

The supposed favourites had been showered and put to bed before the interval.

Brian White was simply untouchable. The Cooley man kicked eight points in a performance which also saw him battle tirelessly to prevent Laois from gaining any possession around the middle of the field.

The second half started nervously for the Wee County though, as Laois threatened to use the wind at their backs and make inroads on Louth’s lead.

Instead, Brian White kept O’Rourke’s side comfortably in command with more splendid place-kicking.

As is usually the case, captain Paddy Keenan used his experience and physique to run the show in the middle. Time and again the St Pat’s man broke down the ball for another to collect or he made himself available for a quick off-load as another attack developed. A class act as always.

By the time Keenan knocked over his sole point of the game after 56 minutes Louth were ten points ahead. Another Brian White free actually made the lead eleven points shortly afterwards.

Even a goal from Laois’ Padraig McMahon with ten minutes left did little to raise the spirits of the O’Moore County fans on the terraces. They had already begun to make their way to the exits at that stage.

Two final points from substitute Kevin Rogers and Brian White capped a memorable, but all too easy Leinster first round victory for Louth.

Wexford are the opponents in a fortnight’s time in Drogheda and after losing to them in the league at the same venue, Aidan O’Rourke will no doubt spend the next few days plotting a revenge mission to help keep the Wee County’s Leinster challenge going in 2013.