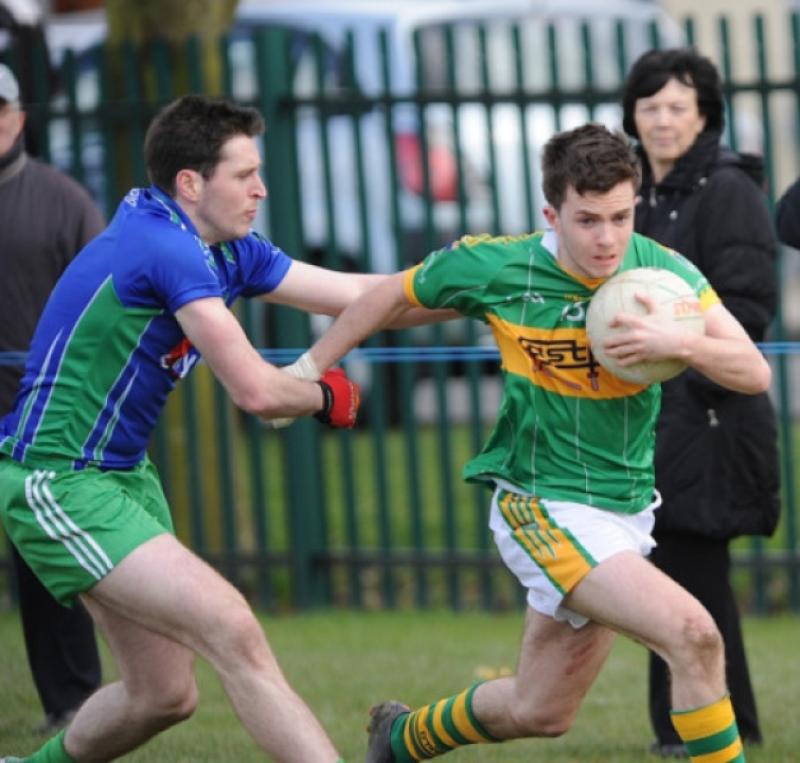 The home team opened the scoring at Seamus Mc Geough Park in the first minute with a pointed free from Shane O’ Hanlon.

The home team opened the scoring at Seamus Mc Geough Park in the first minute with a pointed free from Shane O’ Hanlon.

This was cancelled out straight away by a pointed free for St. Brides from Patrick Reilly.

Shane O’ Hanlon edged Geraldines in front again in the sixth minute with another pointed free.

However St. Brides then dominated the next fifteen minutes of the match using the slight wind to their advantage with points from Shane Kerrigan and Reilly (0-4) before Kevin Hearty found the net.

This occurred after a Ross Kehoe goal bound shot was parried Hearty’s way by the Geraldines ‘keeper. This left the score reading 1-6 to 0-2 in favour of the visitors with twenty minutes gone on the clock.

Geraldines clawed one back with another pointed O’Hanlon free, before their first score from play was registered from the boot of Glen Trainor on twenty three minutes.

The final piece of action from the first half was a well taken point from Conal Devin for St. Brides leaving the score board reading 1-7 to 0-4.

Now aided with the wind, Geraldines restarted the second half with another Trainor point. Aaron Hoey then converted a free for St. Brides to keep six points between the sides.

However a missed opportunity of a goal on thirty seven minutes by Conal Devin for St. Brides so as to extend their lead to nine points, and probably ending the game as a contest, was a let off for the Geraldines.

From the resulting counter attack a deflected shot rebounded favourably for the Geraldines midfielder, which he dispatched to the top corner of the net.

This reduced the deficit to three points and brought the Geraldines back into the game with the scoreboard reading 1-8 to 1-5.

A Hearty point on forty minutes put four between the sides. However two points for Geraldines soon followed.

As the final quarter of the game approached and with only two points between the teams, another deflected shot rebounded favourably fo geraldines.

This time to O’ Hanlon, which this player fired to the net giving his side the lead for the first time since the sixth minute. This second goal was devastating for St. Brides and meant there was no comeback.

Geraldines raised the white flag three more times after this extending their lead to four points.

A Patrick Reilly point for St. Brides with ten minutes to go left three points between the sides. However Geraldines held out and just before the final whistle another O’ Hanlon point secured their victory ending the game with a score line of 2-11 to 1-10.