Kerrigan keeping his side focused 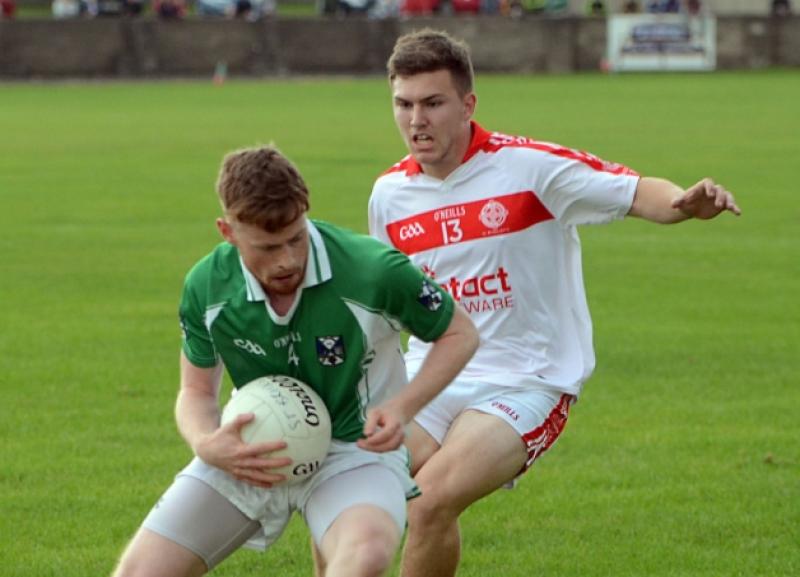 The burden of leadership can hang heavy on some. The captaincy is bestowed upon that person who can take the burden and make it feel feather-light at the crucial moments.

The burden of leadership can hang heavy on some. The captaincy is bestowed upon that person who can take the burden and make it feel feather-light at the crucial moments.

There’s a seriousness and focus about Shane Kerrigan that makes you believe he could keep the head as the tide is rising all around. He speaks slowly and with thought. Being captain of St Brides is an honour, but winning titles is the true acid test for any sports person.

“It’s great being a captain and it’s great to be given that opportunity in the year that we’ve been doing so well”, explains Kerrigan. “There’s been other captains in the Brides who unfortunately didn’t get the chance to be in a final representing their team and be the focal point in a final.

“So it’s a brilliant opportunity for me and hopefully then I can lead the team and we can be victorious. That’s the dream of every person is to be captain of their team and to win something. I don’t think there’s anyone who plays sport who wouldn’t be able to empatise with that sort of dream,” he adds.

It’s Wednesday night and it’s quiet around Pairc an Chuinnigh. A few old heads are scattered around the periphery of the pitch, watching and whispering as the Brides players warm down and make their way to the clubrooms.

Kerrigan sees a lot of young players amongst the panel. Young players that will need guidance and a strong arm in the next few days. It’ll be his job to keep them grounded. No daydreams of glory will be permitted according to the captain.

“Obviously we can all get carried away imaging things winning things and kicking balls over bars, imagine scoring the winning goals, but whenever that happens it’s all about bringing it back to the present moment and what we’re doing. And what we’re doing is sharpening up for the match and then it’s all about getting the rest and the sleep and the food in,” states Kerrigan.

Their semi final against neighbours St Joseph’s was a great advertisement for championship football. The match swung from end to end with plenty of goals and action in abundance, before Brides came good at the death.

It showed a real steely edge to the Knockbridge men. It didn’t look too promising for Kerrigan and his side at the beginning of the match though.

“We played the Joes in a league match and we knew it was going to be a tough game and we knew that we had to keep tight on them. In the first ten minute we were maybe a bit slack on them. We tightened up then and we’d be hoping we can do that for the start of the match against the Gers.

“It was a great win against the Joes. They’re a great team. We’d know a lot of them through school and that. Not so much rivals as neighbours. It was great to get into the final either way.”

It’s the Geraldines on Sunday. There’s no doubting the Haggardstown side’s ability or quality. Yet the Brides have already gotten one over them in the championship this year. So they know how to beat them?

“We played them twice this year and they’ve won one and we won the other. Both close matches, so we don’t really know what to expect because every day is news. The championship final is the championship final and you can only prepare yourself and what we’re going to do.

“I expect a good close match and we expect to be well prepared for it,” surmises Kerrigan.

When it’s put to him that his team have looked the more consistent in the championship and have been capable of playing for the full sixty minute he disagrees, obviously there’s more work to be done in Kerrigan’s mind.

“I wouldn’t agree that we’ve been putting in sixty minutes every game. In the match against the Joes (sem final) we wouldn’t have started as well as we would have like. It’s very hard to get a full sixty minutes in every match.

Having said his piece he runs on into the clubrooms, talking to the other players as he goes. The job’s never done.