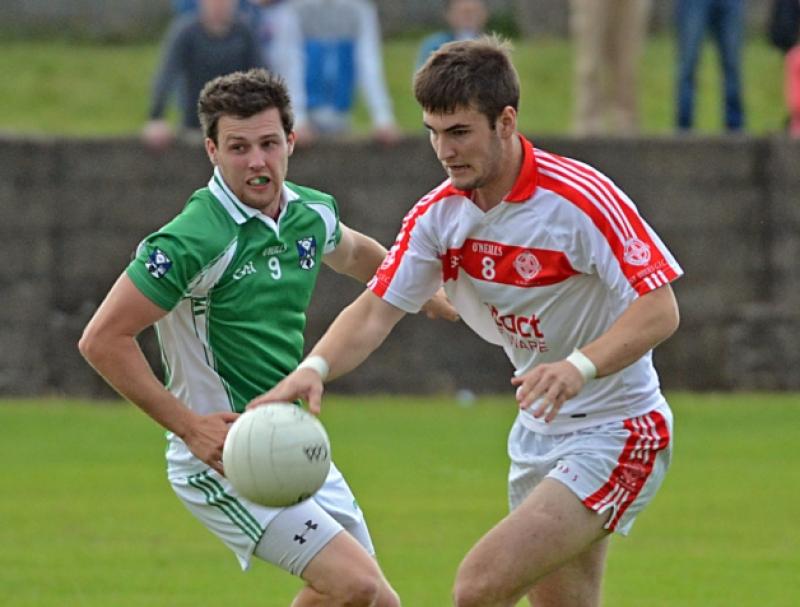 Geraldines put in a powerful first half performance to see of neighbours St Brides and lift the Seamus Flood trophy this evening by 2-15 to 2-6.

Geraldines put in a powerful first half performance to see of neighbours St Brides and lift the Seamus Flood trophy this evening by 2-15 to 2-6.

The title was assured as early as half time as some wonderful scoring from Jim McEneaney effectively killed off the game as a contest. The Gers hit man scored eight points in the opening period to leave the Blackrock/Haggarsdstown men leading comfortably by nine points at the break.

But the foundation for this intermediate championship win was along the Gers backline, with Gerard Hoey in particular deserving of his Man of the Match award. Hoey broke up any Brides attacks along the half back line and sprang the Gers into forward motion.

Having failed to put in a full 60 minute performance so far this championship season, Geraldines saved the best for last as they started strongly and never let up.

The Brides might have made more of a game of it had Conaill Devin’s audacious fist from an Aaron Hoey 45’ managed to find the back of the net and not the upright. At that stage the Knockbridge men were only two adrift and a goal might have changed the complexion of the game.

However Gers never let up after that and with a haul of 0-9 captain Jim McEneaney kept his side coasting throughout.

An early second goal at he start fo the second half from Glen Trainor left the Brides twelve points adrift and they never looked like narrowing it enough to leave the final 25 minutes a close run thing.

Gers manager Eamonn McEneaney was able to clear his bench and even though Brides struck back late on with two goals from full back David Dunne, it was nowhere near enough, as Seamus Flood heads back to Haggardstown for the first time since 2005.