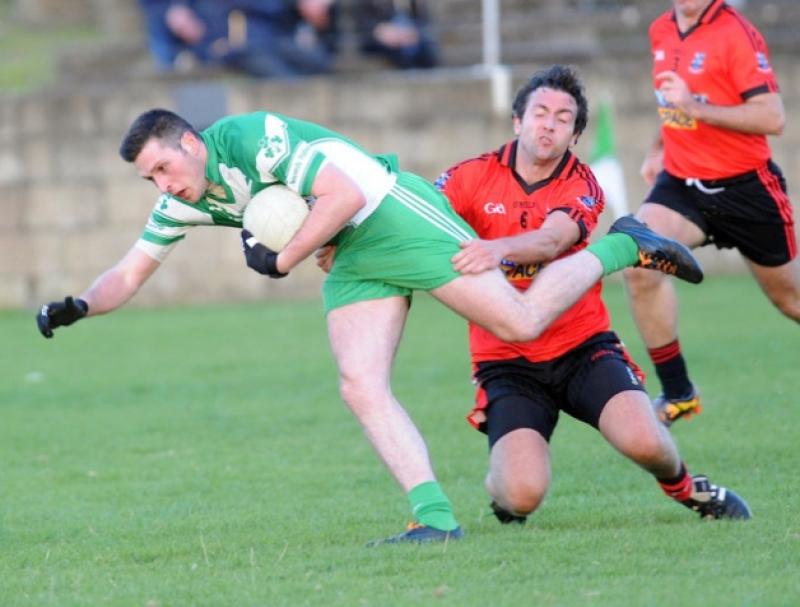 St Patrick’s turn their attention to the AIB Leinster club senior championship this weekend, following what can inadequately be described as a difficult few weeks.

St Patrick’s turn their attention to the AIB Leinster club senior championship this weekend, following what can inadequately be described as a difficult few weeks.

A trip down to O’Connor Park in Tullamore and a first round clash with familiar foes and reigning Offaly champions Rhode await the Lordship men on Sunday afternoon.

In the lead up to the match, understandably, the players have kept themselves to themselves and have focused on preparing in private for their provincial bow.

Fergal Reel’s side did return to competitive action on October 11 against Naomh Mairtin in the league. An emotive minute’s silence before that match and black armbands signified the sense of loss felt by all in Lordship. The difficult task of returning to the pitch following Eamon Carroll’s tragic passing not even two weeks beforehand seemed to weigh heavily in the initial stages though. However St Patrick’s found their old stride in the second half and points from Karl White and Danny O’Connor paved the way for a welcome victory.

That win maintained the side’s unbeaten season in both league and championship this year - something they won’t easily surrender come Sunday in Tullamore.

In the days leading up to that league clash Tyrone manager Mickey Harte paid a visit to St Patrick’s and held a meeting with the players. His own dealings with tragedy and loss in the past no doubt helped create a strong bond and kinship between the players and the All Ireland winning manager; and his advice was believed to have been both inspirational and well received. That league match against Naomh Mairtin will have been the first step on the road to recovery for a still grieving team.

Sunday’s opposition, Rhode, are familar foes, who won their own senior county championship on October 13. In what could best be described as a ‘typical final’ - lacking in real excitement and excelling in nervous energy - the Offaly side saw off fellow county kingpins Edenderry by three points (0-13 to 1-7).

The game, televised on TG4, saw the Offaly side’s key player Niall McNamee live up to his reputation by scoring seven of Rhode’s thirteen scores and sending them on their way to lifting the title.

The result was a measure of revenge for last year’s final defeat to Tullamore. Rhode manager Pat Daly, a former captain for the village club who lifted the Offaly senior championship as a player too, has several county players at his disposal including - Niall McNamee, Conor McNamee, Brian Darby, Niall Darby, Anton Sullivan, Pauric Sullivan, Shane Sullivan, Paul McPadden and James McPadden.

Reel’s side previously encountered Rhode at the same venue and same stage of the provincial competition back in 2012. A Karl White penalty early in the second half proved invaluable that afternoon. However Rhode did run them close late on thanks to a Niall McNamee goal. The Offaly men missed a host of goal chances in the second period also, but St Patrick’s deserved their win on the balance of play.

In the following round in 2012, the Lordship side came up against Kildare champions Sarsfields. The Lilywhite’s side had three points to spare over St Patrick’s in the end that day in St Conleths Park, with a goal from Robbie Confrey in the closing stages handing them the victory after a battling display from Reel’s side.

With that previous victory under their belts, many would fancy St Patrick’s to once more see off Rhode. Yet, the bookies seem to favour a home win. Should St Patrick’s prevail on Sunday they will have the comfort of a home fixture with Navan O’Mahonys of Meath. The Royal county club beat Donaghmore/Ashbourne by two points in the county final last Sunday.