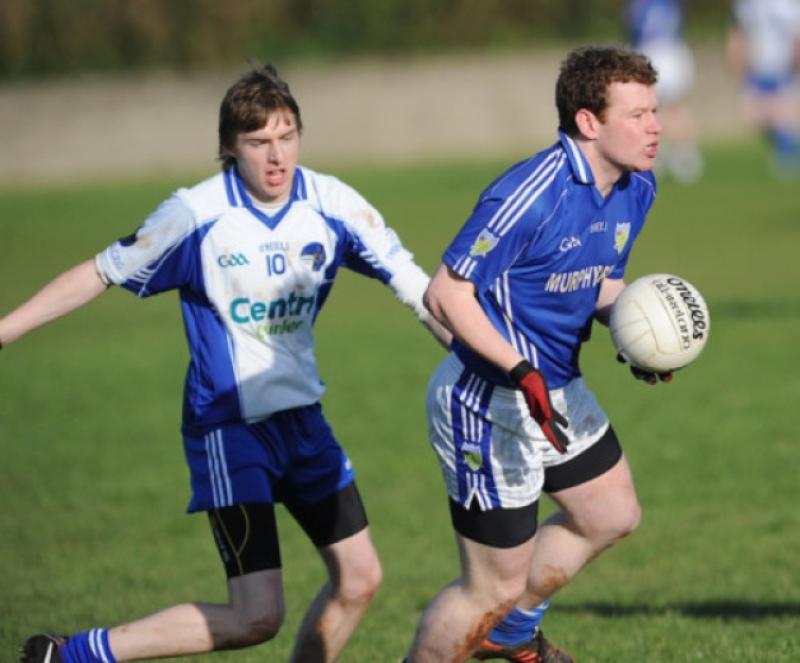 The Joes intermediate side faced their toughest opposition so far this year, when they hosted the league leaders St Marys in Cluskey Park on Thursday evening.

The Joes intermediate side faced their toughest opposition so far this year, when they hosted the league leaders St Marys in Cluskey Park on Thursday evening.

On a dark evening and a saturated Cluskey Park, the home side played with the aid of the wind that was blowing into the road end, in the first half.

The Joes got a good opener that started with Philip Kinahan in the full back line and was finished by Conal O Hanlon in the full forward line.

The Marys hit an immediate response from Paudie Clarke, this would turn out to be a pattern that would happen throughout this game.

An Alan Mc Kenna free was followed by a good Ronan Carroll point from the left corner, before Paudie Clarke put the Ardee side in front for the first time.

Peter Brennan nearly put the Joes back in front, but his shot for goal cracked off the top of the crossbar and over for a point.

A minute later Darren Clarke had better luck down the far end when he drove his shot to the roof of the Joes net, after a sixty yard run from Carroll had set up the chance.

The Joes rallied again and their good work was rewarded in two O Hanlon frees, before two long range frees from Alan Mc Kenna put the home side back in front with 17 minutes on the clock.

The Marys two county stars put them back in front with a point each over the next five minutes. The Joes huffed and puffed over the next ten minutes but got no return from it and two Clarke frees in injury time left the goal between the sides at the break. After a poor opening five minutes to the second half, by both sides, Alan Mc Kenna drove through from the left corner and had a shot at goal, which was well saved by Peter Duffy at the expense of a fifty.

When this kick landed inside, Conall Smyth converted it to a point from a tight angle. This was followed by a good point from Mark Neary. The teams continued to trade scores, as this was cancelled out by a Robbie Leavy point.

Shane Mc Quillan showed from the half back line and scored for the Joes, before Carroll streaked down the left wing and scored another quality point.

An Alan Mc Kenna free was again immediately cancelled out by a Fergal Diamond point at the far end. The Joes worked hard for the next point, scored by substitute David Reilly. They continued to push on for the next six minutes and were rewarded when Conall Smyth was fouled close in, the resultant Conal O Hanlon free drew the sides level with three minutes of normal time remaining.

This was the first time that the sides had been level for over thirty minutes of play, but unfortunately for the Joes it lasted less than a minute.

As again the Marys responded by getting quick ball to Darren Clarke forty yards out from goal, when he was fouled, he struck over the lead point himself.

The Joes were still very much in this game, but a rather fortuitous goal for Fergal Diamond at the stroke of thirty minutes sealed the win for the men in blue. Robbie Leavy wrapped up the scoring with another point in the third minute of injury time in a deserving, although flattering win for the Ardee men.