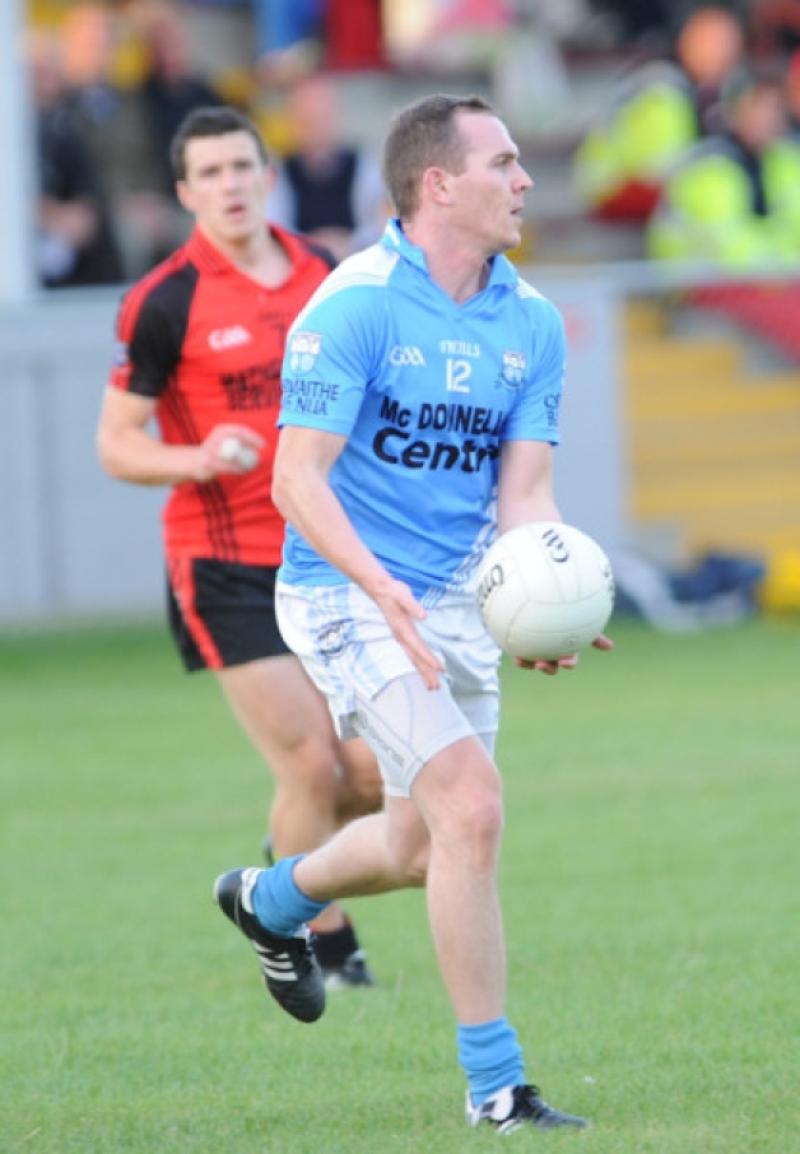 The white flag was hoisted as early as half time. The battered men from Collon emerged for the second half with little to play for but pride. And even that was beyond them as The Blues completely crushed them with astonishing ease.

The white flag was hoisted as early as half time. The battered men from Collon emerged for the second half with little to play for but pride. And even that was beyond them as The Blues completely crushed them with astonishing ease.

It could be the end of the road for a lot of this Mattock team.

The glory days of just a few short years ago are long since gone and this defeat is telling in many ways.

A much fitter and committed Blues side went for the jugular from the off and Mattock simply had no response. Even the usually excellent Adrian Reid could do little to stop the bombardment.

A Hugh McGinn goal in the 13th minute opened a seven point lead.

But it was the ease with which McGinn and Newtown Blues were able to penetrate Mattock that was most impressive.

They made it look easy. A flurry of quick hand passes and some incisive off the ball running and they were one on one with an overworked Timothy Smith in the Mattock goal.

McGinn for his part scored 2-6 on Sunday evening.

He could have had as much as he wanted in truth. The newly returned Andy McDonnell likewise. He managed to post 1-5.

Mattock’s only real outlet was full forward Niall Sharkey. He scored four points and they were really the only chances he had all evening.

At half time the Blues were already ten points ahead and when Barry Sharkey got the Blues third goal just 25 seconds into the second half the Black and Red started to head for the exits around the Gaelic Grounds.

It was painful to watch the last half hour. A once dominant Mattock team were thoroughly put to the sword. The Blues spared them nothing as they pressed on.

Pat McDonagh’s Blues side will meet St Patrick’s in the semi final and on the strength of this performance they should give Fergal Reel’s men a good game.

With Andy McDonnell back they will certainly fancy their chances and with Pat’s not being particularly impressive against St Mary’s on Friday night, the bookies may need to recheck their odds.

Still it was a poor Mattock side that Newtown Blues dispatched, but you can only beat what’s put in front of you they say and when you do it as convincingly as the Blues did it sends a clear and present message to the remaining three teams in this year’s senior championship.

As that second half wore on and Newtown Blues racked up the scores, Mattock manager Glen O’Reilly decided to clear his bench and give as many men a run as possible.

It was akin to sending lambs to the slaughter though.

The Blues fourth and fifth goals came within three minutes of each other bracketing the ten minute mark of the half. McDonnell got the first one and McGinn got his first.

Two goals for Mattock, including an OG did little to foster any sort of comeback, nothing could be done except watch the clock run down.

The final humiliation for the Collon men arrived in the last minute when McGinn smashed home a penalty after he was wrestled to the ground.

It was the last pain for Mattock. Glen O’Reilly will need to take a very close look at his side over the winter months.

Clearing this defeat out of the system will take some doing.