Brides and Gers through to Intermediate semi finals 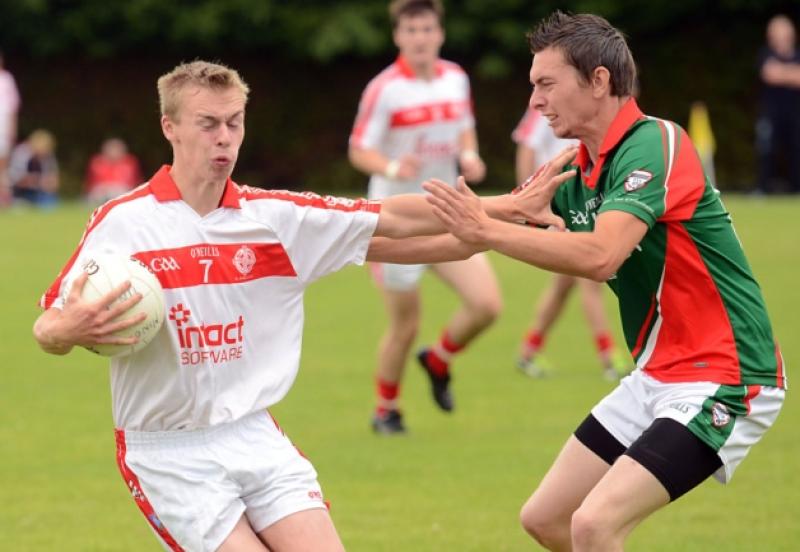 St Brides and Geraldines both booked their places in this year’s Intermediate Championship semi finals thanks to wins over St Fechins and Young Irelands respectively.

St Brides and Geraldines both booked their places in this year’s Intermediate Championship semi finals thanks to wins over St Fechins and Young Irelands respectively.

In the quarter final double header in Castlebellingham tonight, it was the second match between Gerladines and Young Irelands which proved the more attractive of the two.

However in the first match, some late scoring at the end of both halves handed St Brides the spoils as they won out 1-11 to 1-7 against St Fechins.

A Patrick Reilly penalty at the end of the first half proved the decisive score for Brides as it helped give them a five point half time lead.

All the early play went to the red and white, with Kevin Hearty in particular the most threatening of the Brides forwards. They were three ahead before the Termonfeckin men got back into the clash thanks to a classy goal from Ronan Holcroft.

However a stronger Fechins side came out in the second half and pinned the Knockbridge side back, scoring three points without reply.

It actually took Brides 22 minutes to register their first score of the new half, but it was enough to restore their advantage and they fired over two more to win by four points in the end.

In the second match up a tremendous second half onslaught from Geraldines put paid to Dundalk Young Irelands hopes of reaching this year’s semi finals as the Haggardstown team won out 1-16 to 1-11.

The Dundalk club led by seven at half time and looked more hungry and quicker in the first half, with Derek Maguire and Mark Savage causing the Gers backs plenty of headaches.

However Gers manager Eamon McEneaney elected to introduce full forward Barry Hamilton at half time and the young forward inspired his team on to a wonderful come back.

The Haggardstown men scored 1-10 in the first seventeen minutes of the second half as they laid into Young Irelands.

Eventually the Irelanders replied, but it was too late as the Gers kept the scoreboard ticking over, with Shane O’Hanlon and Jim McEneaney posting sizable personal scoring tallys.