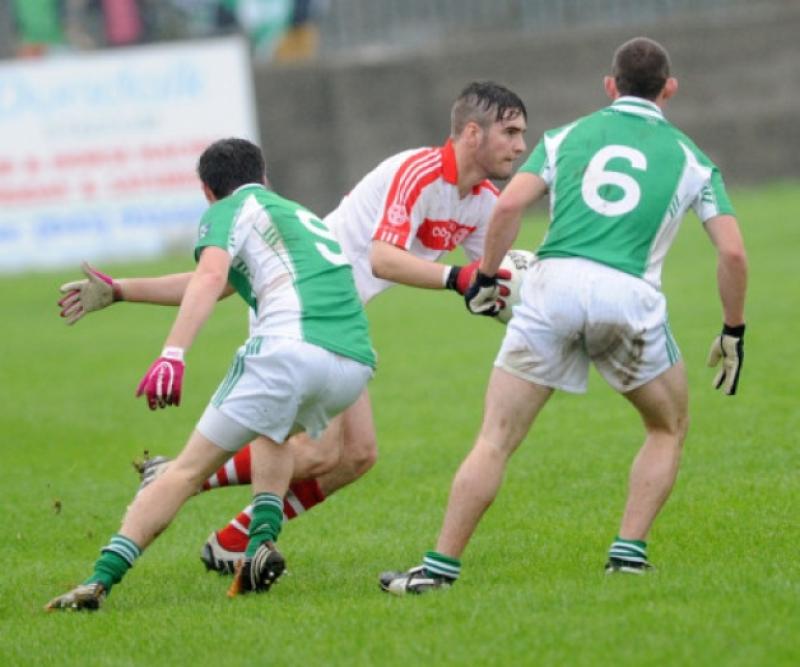 Even by his own admission his current Geraldines side continually surprise him with the way they can approach the big occasions and swat away all nerves and any wobbly knees and step up.

Even by his own admission his current Geraldines side continually surprise him with the way they can approach the big occasions and swat away all nerves and any wobbly knees and step up.

Having seen most of his team grow from boys into title winning men, Sunday’s intermediate success was particularly satisfying for Gers manager Eamonn McEneaney.

“When I spoke after the semi final I said the biggest thing is to try and get the lads to play to play for 60 minutes”, explained the former Louth boss. “The majority of those fellas I’ve had since they were Under 10s . Every time we get to a final they just up their game. It’s incredible. It just seems that when they get to a final the best comes out of them, which is a great way to have it, because it’s very hard to get it the other way - to instil it into them.”

On days like Sunday it can be easy to get caught up in the glory and forget the hard moments on the journey. Those days or even years when success seemed a long way off and a pipe dream unlikely to be fulfilled. McEneaney wanted to praise those that have stuck with the Gers, through thick and thin.

“I’m just delighted. So much hard work has gone in over the last five or six years. Different managers before me put a lot of time in and brought these fellas on. So it’s not just this year.

“The likes of Peadar Gallagher and Gerard Hoey and all them they brought the guys on and it’s important to recognise that. So all of those things added to that today to get them to this point.”

The reward for Sunday’s win is a shot at senior championship football. The Gers were there before and failed to cling on for long. No doubt McEneaney will spend time soon enough drawing up plans for not just staying at senior level, but also prospering.

“It’s important now that we kick on from here. It’s going to be a tough job up in senior football. We’re under no illusions about that. At we feel going up now that we have the artillery to stay up there and winning the minor championship has given us an opportunity and you can’t do any more than take an opportunity when it’s given to you.

“The last time Geraldines went up they didn’d stay up too long. It’s our job now to try and stay up there.”

But that’s next year. In the here and now there’s still another goal to be achieved before the winter break and the luxury of warm fires over Christmas can be enjoyed. The league is very much alive for Gers. Top flight league football is tantilisingly close for the Haggardstown/Blackrock club.

“Obviously there’s more football to be played this year. We have the league now and we’ve the Leinster club. There’s always more football. Days like today are what it’s all about though,” states McEneaney.

Beyond the league this year there is also the not inconsiderable task of preparing for a provencial championship now. Last year Louth’s intermediate champions O’Connell’s got to the final. Any thoughts of emulating that are far from McEneaney’s mind. But like anything he does, he’ll have a plan for that too when it arrives.

“We never looked beyond today. A lot of people had different rumours about different things. But we were just firmly focused on one game and that was today and what the result was going to be and how important it was for us to perform. They all performed for each other today.”

Towards the end of Sunday’s final, the Gers defence leaked two goals. It was disappointing, but certainly not fatal. The game was over and a battling Brides side were fighting for pride for themselves and their village. They certainly didn’t give up.

McEneaney pointed to discipline as the main foundation on which his side’s great defending was built.

“They worked hard on their task all year and it came to fruition and they were very disciplined today. We gave away a couple of goals in the end.”

He also had a few words of praise for David Reilly’s Brides side. They kept going at it even when they surely knew it wasn’t going to be their day. However although both sides are young, the Gers boss believes his side had the edge in terms of experience having been blooded at a slightly earlier stage then their Knockbridge compatriots.

“The Brides fought hard at that stage (near the end) to get something out of it and they showed great character to keep battling despite the fact that they knew they were beaten. I know they’ll be back, they’re a young side. But maybe the experience of our fellas having been around a year or two longer showed and our success in finals also helped too.”

Having had success so young now, the future’s looking increasingly brighter in Haggardstown and Blackrock.

Score of the Match

You could pick from a handful of Jim McEneaney’s points. But the best came in the 28th minute. The Gers captain sprinted down the right flank and from 40 yards out lashed a curled point over with the outside of his right boot. Wonderful.