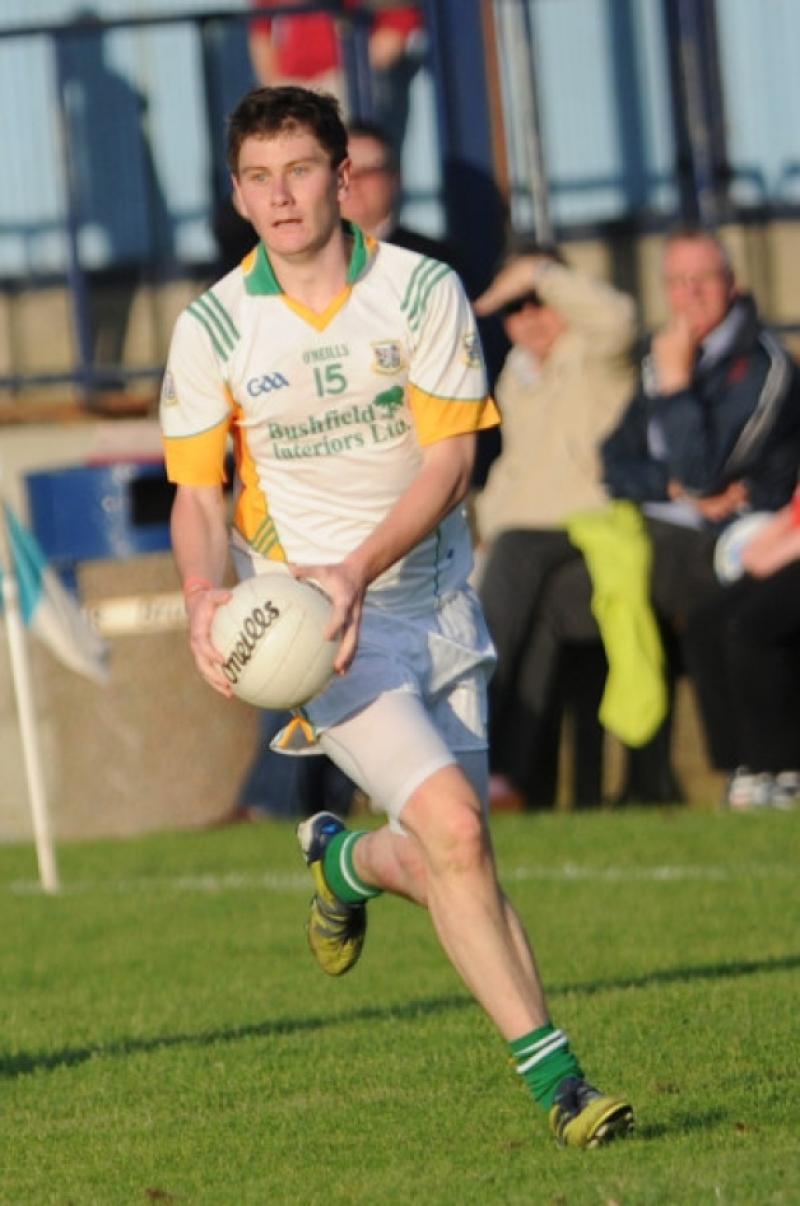 St Joseph’s swept past their Tallanstown rivals last Tuesday, with the two Alans – Quigley and McKenna accounting for two goals each in a comprehensive victory.

St Joseph’s swept past their Tallanstown rivals last Tuesday, with the two Alans – Quigley and McKenna accounting for two goals each in a comprehensive victory.

As the focus of football in Louth switched to the county team, it had been nearly six weeks since the last round of the intermediate league, by the time the Joes faced Glyde in Tallanstown on Tuesday evening.

Glyde held a one point lead in the league table over the Joes going into the match, with a number of Joes first team players unavailable the team with home advantage would have been fancied to take the points in this neighbourly dispute.

Conditions were good, with a warm summers evening, a light breeze and strong sun both coming from the road end that Glyde were defending in the first half.

The home team were instantly off the mark with a Conor Sheridan point. There was a quick and important response from the Joes though, as Conall Smyth set up Alan Quigley, who rolled the ball along the ground to the bottom corner of the Glyde net.

Unperturbed, the men in blue levelled matters by the seventh minute, with a Kieran Sheridan free from the right corner being followed by a fisted point from La O’Brien.

The Joes were not long about adding their second goal though, as Alan Mc Kenna played an interchange with Jack Mulligan before cleverly unsighting the keeper with his goalbound shot.

Unusally for this game, the next ten minutes passed without a score for either side, when it did come it was another Kieran Sheridan free, this one from over fifty yards out.

Up until this point it would be fair to say that the Joes fullforward line had been getting pretty poor service, despite this, when Derek Mulligan fed Alan Mc Kenna he got in for his second and the Joes third goal of the game in the 25th minute.

As the half entered injury time Glyde reduced the deficit with two more points. The first one coming when La O Brien played a quick free to Gerard Carroll and the second one being driven over by Brian Duffy. The Joes did get their lead back out to three before the small whistle though, when Derk Mulligan was fouled close in, Alan Mc Kenna kicked the visitors first point of the half.

The first ten minutes of the second half were low on scores, but high on action. As a game that had simmered during the first period boiled over.

All five bookings from the game came in this period, with Glyde winning this battle on a score of 3 to 2. There was two scores in these minutes, both for the Joes. The first coming when Alan Mc Kenna was fouled in the right corner under a heavy challenge, he dusted himself down and kick it clean and through.

The next, the Joes first point from play in the match, was scored by Derek Mulligan after a quick free from Mc Kenna. Down by five points, Glyde were thrown a life line when they were awarded a penalty for a foot block. Fiachra Sheridan stood up to take the kick, but his well struck shot was more than eqaully well saved by Robbie Arthur.

Another point each for messers Mc Kenna and Mulligan further extended the Joes lead, with Mc Kennas coming from a 50 yard plus free. It was not until the fifteenth minute of the half that Glyde got their first and what would prove to be their only point of the half, courtesy of a free from substitute Barry Sharkey.

In the 24th minute Jack Mulligan played a great ball out of defence to find Conall Smyth, he drew the defence and popped the ball on to Alan Quigley, who still had a bit to do before burying his shot in the Tallanstown net. Gary Kinahan set up Derek Mulligan for the penultimate score, before Jack Mulligan set up Quigley for an almost carbon copy point, as the Joes wrapped up a comprehensive win.

Clans back on track

A more confident second half performance from Clan Na Gael saw them past Hunterstown Rovers on Thurday night.

Trailing by five points at the break, the Castletown Road team decided to move Billy Smith into midfield and the tactical switch paid dividends as they fire in 1-10 in an impressive second period.

Hunsterstown made the most of their chances in the first half and a goal midway through the half gave them breathing space as the Clans failed to convert their own chances.

Two points in the last flurry of activity of the first period gave Rovers a lead of 1-6 to 0-4.

However the second half was all one way traffic as Mark Newell hammered in a well worked goal and Drew Duffy contributed seven points, as the Clans moved into midtable in Division two.