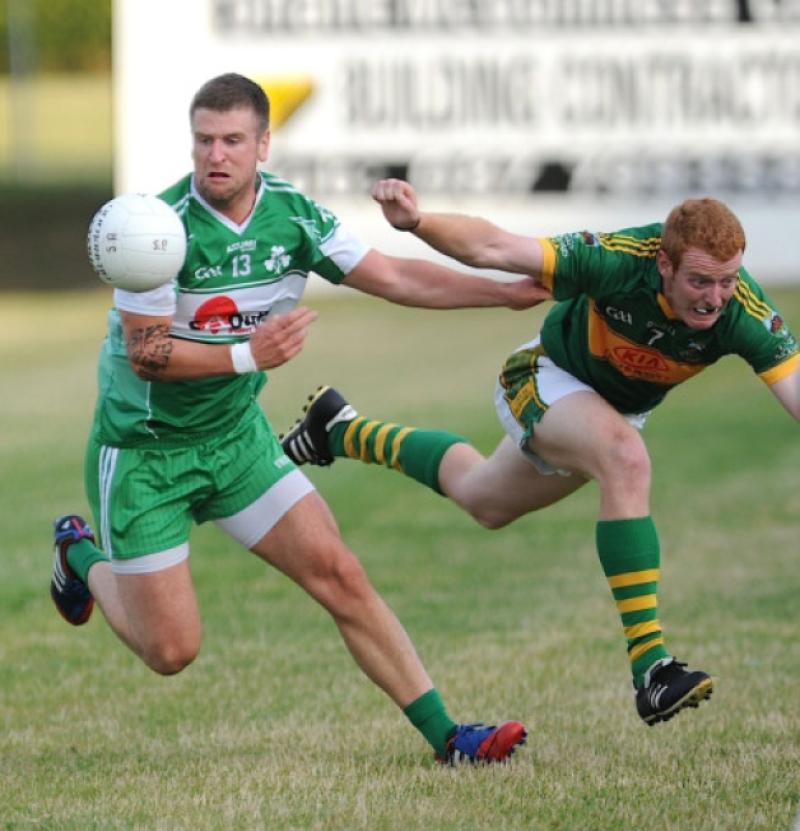 Pretenders to the throne, beware!

Pretenders to the throne, beware!

That is the clear message that St Patrick’s sent out in Hagardstown on Saturday night with an 0-11 to 0-8 win against peninsula rivals Cooley Kickhams in this Louth Senior Championship Group 4 encounter.

Like a world champion boxer up against a hungry contender, the Lordship side took time to settle and found themselves on the receiving end of an early barrage by a Cooley side who are looking to end 23-barren years without a Joe Ward.

Cooley looked the more focussed early on and Pat’s were left with a bloody lip after Darren Marks fired the Fr McEvoy Park outfit into a 0-6 to 0-1 lead after 19 minutes of play.

That seemed to set the Pat’s machine in motion, though, and, from then on, they effortlessly moved through the gears, gradually picking away at Cooley’s lead before delivering a number of vicious jabs in the second-half that left their opponents out on their feet at full-time.

Pat’s are looking to complete a trio of back to back Joe Wards. On this evidence, those who fancy a flutter on someone stopping them from doing it would be as well off throwing their money into the harbour at Gyles’ Quay.

A big crowd turned out for the peninsula derby and they were treated to undoubtedly the best game of this year’s Championship.

The first-half ebbed and flowed at a ferocious pace and referee Stephen Murphy had his work cut out early on as a number of minor scuffles broke out in pockets across the field.

Cooley thought they had drawn first blood when Conor Rafferty fired over with what looked like an excellent score in the 2nd minute but the effort was adjudged to have went wide by the umpire.

At the other end there was no doubt about Paddy Keenan’s left footed free two minutes later; the Louth captain tapping over after Richard Brennan had hauled Karl White down with a tackle that Munster’s Paul O’Connell would be proud of.

For the next 15 minutes it was Cooley who penned the Joe Ward holders into their final third.

Pat’s goalkeeper Sean Connor had to make a fine stop to deny Jason Long’s goal bound drive in the 8th minute; Brian White sent the resulting 45 over the bar.

Indiscipline ravaged the Pat’s backline early on and White punished them with a further three efforts from dead ball situations. They came after he had put Cooley ahead with an instinctive shot from the floor after Long had done enough to divert a high ball into his path.

The handbags continued between both sets of players and Connor was shown a yellow card after Patrick McGrath was left in a heap on the floor. White made no mistake with the resulting free. Eoin O’Connor was next to go into Murphy’s notebook, the Pat’s forward booked for persistent fouling.

Louth boss Aidan O’Rourke was a notable spectator and he watched White take his first half tally to five with two more efforts that were meat and drink to a kicker of his standards.

Pat’s were clearly rattled and the normally unflappable Keenan sent a free horribly wide before Darren Marks continued Cooley’s fine start by making it 0-6 to 0-1 with a fine score.

The Lordship side eventually regained their composure and it was they who finished the half in the ascendancy.

Aidan McCann’s quick free set Evan White away for a well taken score before McCann himself reduced the half-time deficit to three points with an injury time effort.

The second-half opened with White firing over another free but it proved to be a false dawn for Cooley as they were put on the rack for the remainder of the game. Pat’s simply oozed class and four points in the space of six minutes saw them back on level terms.

McCann started the revival when he turned the ball over the bar after Gallagher had again denied Danny O’Connor from hitting the net.

Karl White was next to raise the umpire’s flag before the two O’Connor’s, Danny and Eoin, tagged on two more scores, the latter firing over after his namesake had won a high ball that he really had no right to in the 61st minute.

A couple of Cooley misses followed but they were brief interludes from Pats’ domination. Keenan found his range again with a simple free before Karl White took advantage of some slack marking to make it 0-9 to 0-7 in the Lordship side’s favour.

The introduction of Eamonn Carroll early in the second-half added more guile to the Pat’s attack and he played a major part in his side’s win, picking out Keenan, who, in turn set up Danny O’Connor for another neat score in the 52nd minute.

And it was Carroll who put the icing on the cake in the 59th minute, receiving huge applause from the Pat’s fans in attendance with a delicious solo effort from distance.

By this stage Cooley had thrown in the towel and although White had the last say of the night with another free in time added on, the fact that it was their first score in 27 minutes of play told its own story.

The signs are ominous for the chasing pack.