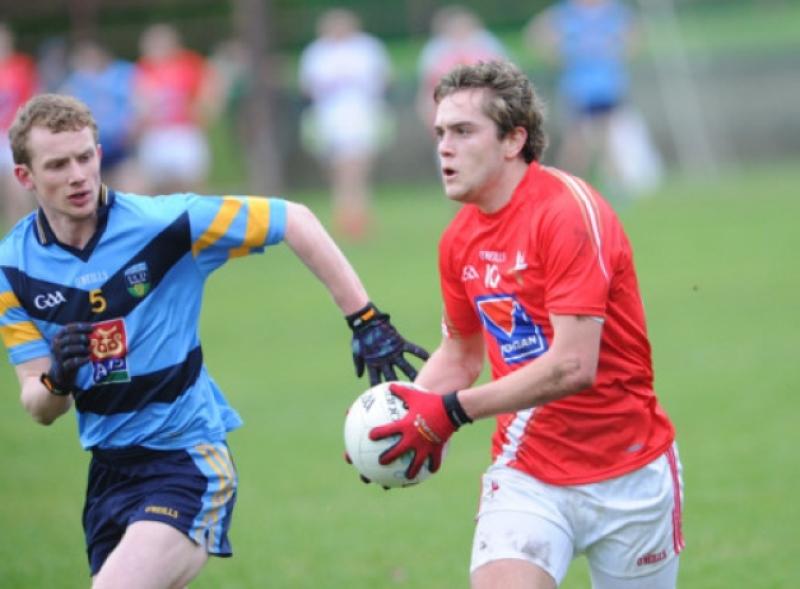 League form matters little when it comes to the all-or-nothing, do-or-die nature of the championship.

League form matters little when it comes to the all-or-nothing, do-or-die nature of the championship.

Since he first rolled into Louth back in October last year, Aidan O’Rourke has pledged his devotion to all things relating to summer football and the championship. The league is a warm-up, nothing more.

As he signed autographs at the Louth GAA open night in Darver two weeks ago, Newtown Blues half forward Andy McDonnell took a bit of time to reflect on the league this year, but also his own personal form. He didn’t shy away from his disappointment at his performances post O’Byrne Cup.

“I started off well enough this year, but maybe during the league I wasn’t as effective as I was in the O’Byrne Cup”, nods McDonnell. “But then again maybe the O’Byrne Cup isn’t really a competition, it’s just a chance to get your fitness up maybe. In the league I did okay, my scoring was a bit up. In the championship last season I was off form maybe.”

Switching away from his personal displays, McDonnell has seen a marked improvement in the panel in terms of a harmonious atmosphere.

“This season with Aidan he seems to have brought a lot of lads on and we enjoy training. There’s more of a team bond compared with last year or the year before, for whatever reason.”

If there’s one thing that disappointed McDonnell about the league this year, it was Louth’s inability to close out matches that were there for the taking.

“We could probably call ourselves the “nearly men” this year. A lot of the games we should have gone and could have won, we could have put some of the teams to the sword. We were five points up against Laois last time and we let them back into it and then another time against Westmeath”, added McDonnell.

“But the one game that stood out is the Armagh game. Brian White stood up after missing a penalty and he kicked that free and we went on to get three points in a row.”

The build up to the championship hasn’t just started since the league ended, it’s been brewing since day one of O’Rourke’s reign.

“I don’t think we can read too much into league form, the championship is different, I think every team approaches it differently. We’ve upped our training and upped different aspects of our game more. As Aidan has said from the start of the year, it’s all been building for the championship. Our aim for the league was to consolidate our place in the league and we did that”, explained the Louth star.

The league clash with Laois at the start of March was helpful in terms of getting a closer look at their players this year, but it’s of little help beyond that, according to McDonnell.

“I think the championship is a different game when it comes around. We know maybe their top twenty players, who they have and who we need to mark and hopefully on the day we’ll catch them on the hope, because really everyone seems to think they are favourites.”

Despite being the underdogs in many pundits opinions and also having to play away from home, the Newtown Blues man is looking at all those potential negatives as positives to grasp.

“It’ll be hard in Portlaoise, but I think it will suit us. It a lot more open than the pitches we’ve been used to, like Drogheda. The pitch is good qulity and it might suit our forwards. They’ll be able to run at them.

“I think everyone on the panel has already played down there. In the last couple of years most of the lads have played there at least two or three times. I think that will stand to us on the day hopefully.”

Some people might have want a slightly easier opening round tie. But McDonnell recollects a recent championship nightmare which quickly dispells that myth.

“I suppose you might say we’d prefer a team like Carlow, but Carlow did us over two years ago down in Portloaise. So we’ve bad memories there.”

Laois and Louth prop up the less fancied side of the Leinster championship draw this year. The bigger fish are swimming in the other half. That’s of no concern to McDonnell. It’s all about Laois and O’Moore Park next Sunday. Nothing more.

“I know its a cliché but every game is going to be a tough game. Laois will be a good test. They might be little too defensive at times. I know people will be looking at the other side of the draw with Dublin and Kildare being the so-called stronger teams. We’ll just look at Laois and move on hopefully and play Wexford in Navan.”

Naturally the focus is solely on day one, but it’s hard not to look beyond that and it has been something the Louth boss and others have been keen to prepare for – a championship campaign in 2013.

“The main goal is to play as many games as possible”, explains McDonnell. “I know the main thing is to win a Leinster championship, whether it’s this year or over the next few years, you need to look at the bigger picture.

“Now it’s time we stood up. If we do lose to Laois, we’ve still got the qualifiers and we’ll be looking to maybe get in to the last twelve. But I think we’ll be just looking at the Laois game first and foremost.”