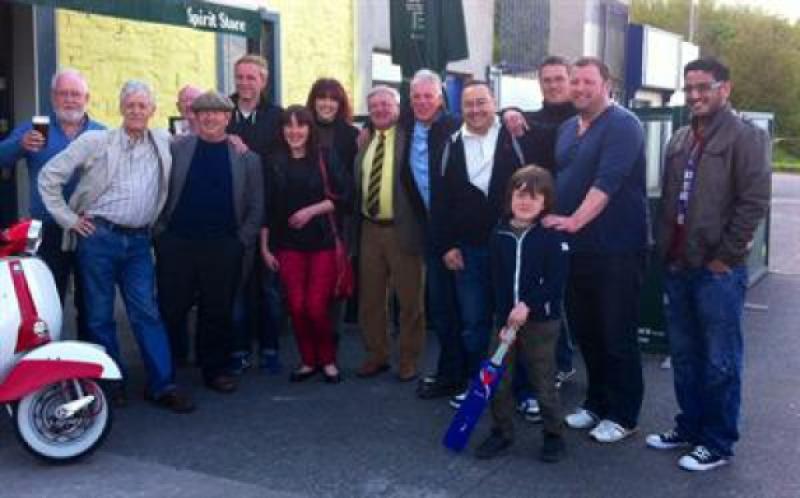 One of the lasting joys of cricket is the Taverners season where what can euphemistically be called ‘seasoned’ players mix with newcomers for Friday evening 20/20 games against similarly minded opposition.

One of the lasting joys of cricket is the Taverners season where what can euphemistically be called ‘seasoned’ players mix with newcomers for Friday evening 20/20 games against similarly minded opposition.

And so it was with a wonderful start to the Dundalk Cricket Club Taverners season that 13 expectant willow bashers embarked on Teddy’s bus last Friday to challenge the might of Armagh for the annual contest.

Armagh took to the wicket first on the glorious Mall close to the city centre, and put up a very modest 90 runs in their 20 overs.

Some of the Dundalk highlights of that innings included the return after a long absence of Fergie Boyle who took two wickets, and the four overs bowled by Gerry McKeever with figures of one wicket for 15 runs.

Justin John proved the quickest bowler of the evening with a smart one for seven, after handing over the wicket keeping duties to Neil Waters who produced an eyecatching performance behind the stumps that promises much for the rest of the season.

But the highlight of the innings was the spectacular diving catch at square leg taken by Deborah Challoner to dismiss Armagh’s hotshot, Gardiner who regretted thumping the ball at fierce pace within six feet of the flying Deborah. This was shortly after Deborah took her maiden wicket, courtesy of a super boundary catch by Brendan Waters.

Louise Challoner opened the innings with Liam Gaynor who unluckily fell early. Gerry ‘Stonewall’ Murphy came in at number three to steady the innings with Louise, before being retired early in over 10 by skipper Brian Morris who wanted to allow the ‘slashers’ an opportunity to hurry the score along. Louise retired shortly after undefeated on three. But the great hope Ian Chong was tragically run out when going for a risky single whilst in hot pursuit.

Top batsman was Brendan Waters who carried his bat for 15, but it was not enough for the doughty Dundalk team who only made it to 49 in the allotted 20 overs according to scorer John Finnegan.

Nobody appeared dismayed after this season opener when the post match festivities got under way. Coach Shane Gilson was well pleased with the promise he saw on view. The warm atmosphere in the clubhouse continued between the teams until Teddy moved all the kit back on board. The night ended on the Quay in Dundalk with plans being made for this coming Friday’s trip to North Kildare.

The seconds game the following day against Phoenix in Dromiskin had to be curtailedafter ten overs because of rain.