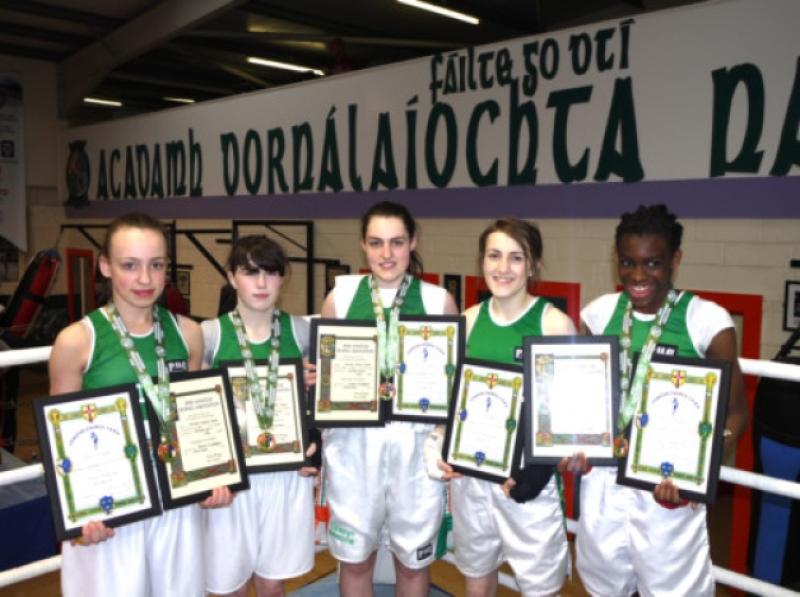 Don’t let looks fool you. These girls know how to handle themselves when it comes to boxing, normally a male dominate sport.

Don’t let looks fool you. These girls know how to handle themselves when it comes to boxing, normally a male dominate sport.

Katie Taylor and a few other girls changed the whole perception of girl boxing after The 2012 Olympics, which were held in London.

Such was the hype created by their achievements that ladies boxing is now the norm in Irish and world boxing.

Irish boxing clubs has seen a big influx of girls into their boxing clubs that some clubs have more girls than boys boxing now and Clann Naofa is no different.

In this year’s Irish Girls Championships, Clann Naofa had five girls entered and had the biggest overall result when 4 out of 5 of their boxers won Irish Titles.

Shauna and Naomi O’ Callaghan each had a walk over after their opponents pulled out at the last moment, bitterly disappointing the girls as each had trained hard and wanted to prove themselves in the ring that they are the best in Ireland at their weight.

The most waited upon contest of the five girls was between Rebecca Gorman and Nicole McCann from The Dealgan BC In Dundalk.

From the very first bell of round one this highly fought contest had air of anticipation, as the two biggest clubs in Louth went head to head as to who would claim bragging rights to the girl 6, 54kg championship.

Round one started as a precedent for the rest of the fight. Straight into battle each boxer sought to dominate the other, throwing punches at a fantastic rate that would put most boy boxers to shame, but at the end of round 1 it was the Clann Naofa Boxer who held the advantage.

Spurred on by her coaches Rebecca upped the anti and increased her punching ratio and had Nicole on the back foot at the end of round 2.

For round 3 it was all or nothing for the Dealgan Boxer as she gave it her all, but Rebecca was just too strong and accurate, and eventually the referee had to give the Dealgan boxer a standing 8 count as she came under heavy pressure from The Clann Naofa Boxer, and at the end of round 3 Rebbecca ran out a 22/14 winner and All Ireland Girl 6 Champion.

Evelyn Igharo had an easy contest against Ruadhan Naughton in her 48kg bout. With a lightning left hand jab and quick silver feet movement which at times left the audience gob smacked at her speed and accurate punching that the Emerald (Galway) boxer was left at times chasing shadows trying to nail down Evelyn.

After a one side contest Evelyn ran out a 12/2 winner and girl 1 48kg Irish Champion.

The only blotch on Clann Naofa’s card was when Elisha O’ Grady, girl 5, 50kg boxer who was defeated in her contest against C Gibney from St Pats BC Newry.

Try as hard as she could, Elisha was just unable to make any head way against The St Pat’s boxer going down in defeat.

Clann Naofa would like to take this opportunity to congratulate all their girls in a very successful All Ireland Championship and hopefully will produce an Olympic Champion. Hard work pays off girls, keep up the good work.