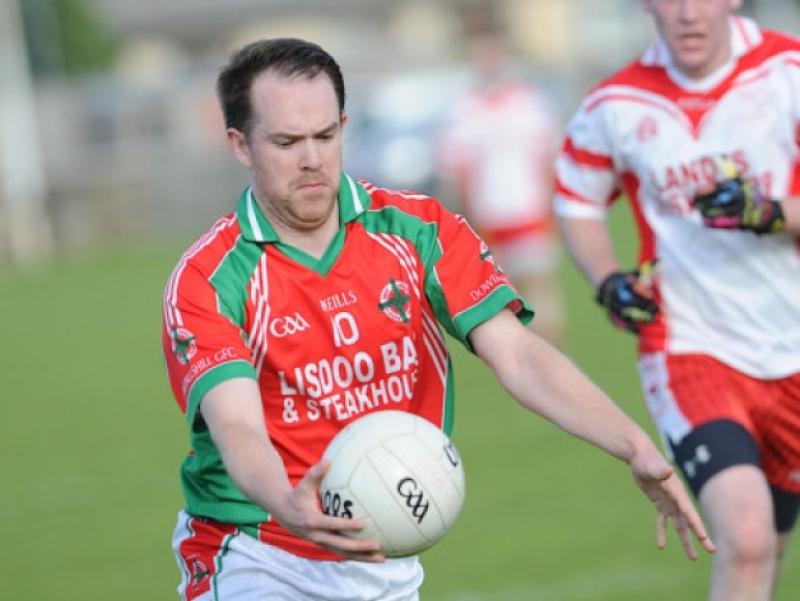 Roche Emmets easily saw off their Drogheda opponent’s in spite of the terrible conditions in this Division Three clash.

Roche Emmets easily saw off their Drogheda opponent’s in spite of the terrible conditions in this Division Three clash.

The match was played in Drogheda in difficult wet and windy conditions. Roche were aided by the elements in the firrst period and opened the scoring in the third minute with a Philip Quinn point.

As the Tones struggled to get the ball out of their half Roche added further points from Robbie O’Hanlon (0-2), David Quigley and a second from Quinn.

The Tones battled on, but due to some good Roche defending and some wasteful shooting they could not register a score.

Roche pushed on and grabbed a superb goal from corner forward Conor Carthy. As the half drew to a close Roche added two more points from O’Hanlon to lead 1-7 to 0-0 at the break.

With the conditions getting worse in the second half the quality of football was not too high but both teams tried to play football as best they could.

As Roche were now against the elements and Tones coming up against resolute defending scores were at a premium in the last half hour.

A combination of mis-placed passes and inaccurate shooting meant there was only one more score from Roche’s David Quigley in the 51st minute.

With a final score of 1-9 to 0-1 this proved a good win for the Roche men missing quite a few of their regular starting fifteen.

Dowdallshill chalked up a convincing victory over John Mitchels on Saturday night thanks to the scoring exploits of their forwards Paul Gill and Noel Finnegan.

Looking to continue their good recent run, the Dundalk team tore into their Ardee opponents from the off, but despite some good play, the Mitchels remained resilient and they only trailed by six points at the interval.

Yet the second half was one way traffic as Dowdallshill picked off scores with relative ease and finished up winning by a margin of thirteen points.

Durnin does the business for Westerns

Westerns continued their recent run of good form in Division Three with this three point win over a more fancied Lannleire side on Thursday night.

The main man for The Reaghstown outfit was midfielder Tommy Durnin, who fired in 1-4 during an impressive performance for Westerns.

Durnin’s first half goal was enough to keep the sides level going in at the break.

But a more considered effort from Westerns in the second half saw them hoist over five more scores to Lannleire’s two as the Reaghstown men plundered two valuable points form their visit to Dunleer.

Sean McDermotts, who had won the Kevin Mullen Shield in style the previous week went down to St Finbarrs in a very entetaining match on Saturday evening at Ballygason.

The first half was very close with both sides scoring 1-5 each, the goals coming from the ever green Sean McGahon.

The early stages of the second half belonged to the Seans as they scored 1-1 and looked as if they were going to kick on and win with ease. Then the home side had a man sent off and lost one of their better forwards Bernard Osborne through injury and this lifted them. From here on there was only going to be one winner, as the ‘Barrs forwards, superbly led by William Woods, kicked some wonderful points, while the Seans failed to add to their score.