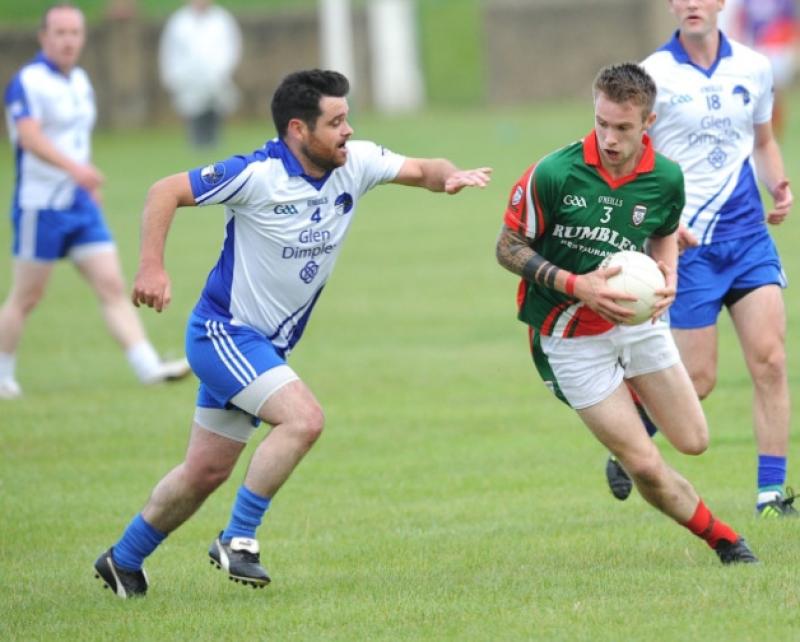 By his own admission neither he, nor the club, were prepared for life at intermediate level last year. Brian Lynch and his Glen Emmets side were merely riding the crest of their Christy Bellew success from the previous year and to most outsiders looked like cannon fodder for the big guns.

By his own admission neither he, nor the club, were prepared for life at intermediate level last year. Brian Lynch and his Glen Emmets side were merely riding the crest of their Christy Bellew success from the previous year and to most outsiders looked like cannon fodder for the big guns.

Lynch quickly realised how tough Louth’s second tier is though. Drawn against 2013’s eventual winners Geraldines (beaten by six goals and 17 points) and finalists St Brides (another four goals and 10 points) in the group stage was a tough ask for any side at that level, more so for the fresh meat.

Reflecting on it now, Lynch is honest in his assessment.

“We just weren’t prepared. We didn’t have a plan and a programme in place and then to be drawn in the same group as the finalists didn’t give us much of a chance.

“I feel if we could have even won one game we might have clung on and been able to build at that level. But it just didn’t happen,” he sighs.

Lessons have been learned though. This year has seen a more focused and detailed plan in place. A plan which takes into account the possibility of intermediate football in 12 months time. The Tullyallen side have a second chance and they won’t be found wanting this time around. Hard work and solid foundations have been in place since late last year.

“You want to prove yourself against the likes of the Fechins and Brides at the next level and the chance to play a side like Oliver Plunketts gives us that opportunity. Being able to compete against or even beating Plunketts is the bench mark for where we want to be,” adds the Emmets boss.

That plan has had to change just slightly according to Lynch. The main focus for 2014 was to gain promotion from Division Three in the league. The championship journey has been a welcome bonus.

“Our plan all along was to concentrate on our league and get into Division Two. The thinking being that playing league matches at that level would give a natural boost to our future championship hopes. So hitting top form in the league has actually been of benefit for us in the championship.”

Although automatic promotion looks slightly beyond them right now, Glen Emmets still have a great shout at fulfilling their original goal through the play-offs.

The feeling that Lynch is looking further down the tracks and is building for the future is hard to shake. As well as the championship taking a back seat this year, 2014 was meant to be a year to bring blood the burgeoning talent bubbling over at the club.

“We’ve the likes of James Butler, Conor Cusack, Jamie Farnan and Conor Grimes who have all come through and proven their worth. Lately some of the more experienced lads have come back from injury, so some of the younger lads haven’t started as regularly as they would have liked, but it shows the potential coming through the ranks,” he adds.

Their semi final against Sean McDermotts two weeks ago proved a bit of a dud in terms of being a worthy challenge for Glen Emmets. The game was over by half time and their was a distinct lack of competitiveness from a weakened McDermotts side.

Lynch admits he would have hoped for a stiffer test: “We certainly would have preferred a tougher game. But semi finals are tougher to win anyway because no one wants to make a mistake and lads are much more cautious than normal.”

Saying that, their quarter final against Lannleire proved a more worthy offering. The Tullyallen outfit struggled initially to contain the Dunleer men, who scored three early goals and a potential upset looked on the cards.

Slowly though the Emmets superior fitness and strength in depth took its toll on Lannleire and they eventually won it by four points; but not before Conor Grimes and Mark Noone were thrown into the battle to restore order.

“Any game against Dunleer is tough”, agrees Lynch. “You’d never go out against them expecting to win. They’ll always put it up to you. We always set the lads up to think about what to do when the opposition have the ball as opposed to when we have it. That was very important against Dunleer.”

This will be his fourth year in charge and Lynch has experienced Christy Bellew success plus the sour taste of intermediate championship relegation but with no major injuries to worry about, along with a young and vibrant underage set up, a win against Oliver Plunketts could see them establish themselves in the upper echelons for years to come.