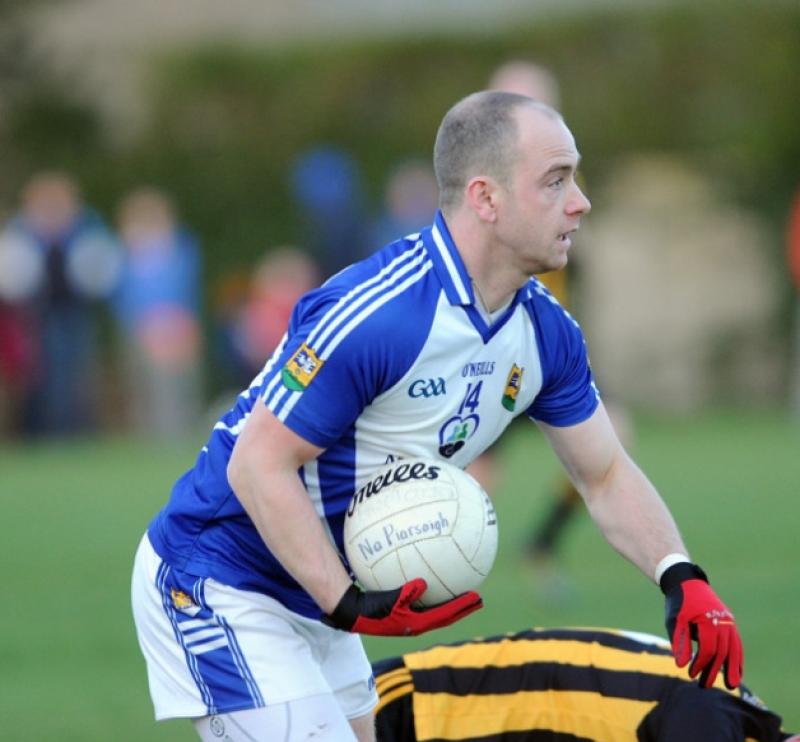 Inter-county star Darren Clarke showed his class by hitting 11 points as Ardee St Mary’s picked up their first league win of the season by comfortably beating a depleted Young Irelands side on Wednesday night.

Inter-county star Darren Clarke showed his class by hitting 11 points as Ardee St Mary’s picked up their first league win of the season by comfortably beating a depleted Young Irelands side on Wednesday night.

The Dundalk side arrived at Pairc Mhuire on the back of an opening day victory over Roche Emmets but they had to make do without their influential paid of brothers, Dean and Derek Maguire, due to Louth minor commitments and injury respectively.

And they just couldn’t muster the performance needed to make it two wins from two as the masterful Clarke led the mid-Louth side to victory.

St Mary’s, who themselves were missing former Louth minor star Robert McCabe due to injury, got the opening three scores of the game with two Clarke frees and a point from the talented Paudie Clarke.

A Mark Savage goal, the forward beating Peter Duffy in the Mary’s goal, levelled the score but Ardee took it in their stride and points from Paudie Clarke, Martin Duffy, Darren Clarke and Mark Fay put them ahead on a comfortable scoreline of 0-7 to 1-0.

It wasn’t long before the men from Ardee got their opening goal of the night. Good work from Paudie Clarke, who was impressive throughout, ended with half forward Jamie Rooney taking possession and he finished competently past Fergal Sheekey in the visitors goal, Two more points followed, emanating from the Clarke brothers, Paudie and Darren, to give St Mary’s a firm grip on the proceedings.

Dundalk Young Irelands were given some hope when corner forward Dermot Mone struck their first point of the game with a free. It was a brief respite though as Ardee responded in ruthless fashion, hitting 1-1 without reply. Darren Clarke fired over his fifth point of the game before Jamie Rooney struck his and St Mary’s second goal of the night to put the cap on an utterly dominant first-half display.

Mone fired over the Irelanders’ second point of the night but the scoreboard at half-time said it all: 2-10 to 1-2 in Ardee’s favour.

The second-half started pretty much in the same vein as the first with St Mary’s rubbing even more salt into the wounds of the Young Irelands with points from Donal Mathews and three points from the boot of Darren Clarke.

Points at the other end from Mark Savage, Andrew Nixon and David Lally put some respectability on the scoreline but the Mary’s tagged on a couple more scores when Darren Clarke converted a ‘45’ before setting up substitute John Bingham for another point to make it 2-16 to 1-6.

Mark Savage struck over another free for Young Irelands before Martin Duffy struck over his second point of the night and the Mary’s finished off with a flourish, outscoring the Young Irelands 1-4 to 0-1, thanks to three scores from Darren Clarke and a goal from substitute, Fergal Diamond, which put further icing on what was already a very sweet Ardee cake before Savage floated over a consolation free for Young Irelands, which left it 3-19 to 1-8 at the final whistle.

This was a very ruthless and economical display by the men from Ardee who hit 1-10 from 15 shots in the second-half. They also dominated the Young Irelands kick outs, winning six from ten in the second half and with Darren Clarke in this sort of form, who knows where they might end up come the end of the season.