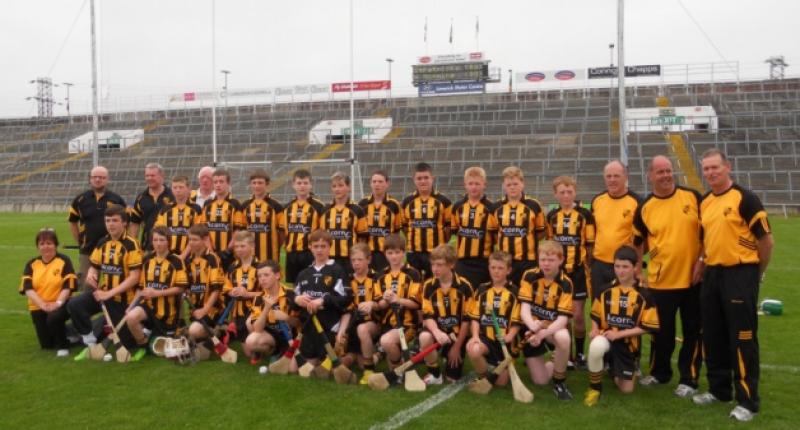 Louth champions Naomh Moninne travelled to Limerick on the weekend of July 5-7 to take part in the Feile na nGael U14 Hurling competition.

Louth champions Naomh Moninne travelled to Limerick on the weekend of July 5-7 to take part in the Feile na nGael U14 Hurling competition.

It will be fondly remembered by all players, mentors and family members who made the trip as the young hurlers from Dundalk just missed out on taking home the Div 6 title, suffering a heartbreaking three points defeat in the Final on the Sunday morning, a game that was played at the Gaelic Grounds in Limerick city.

The team and supporters set out on the journey early on Friday morning and were welcomed warmly by host families from Croom GAA Club.

Having made it to the Division 6 Final Naomh Moninne lined out at the Gaelic Grounds on Sunday morning with the game throwing in at 10am and among those in attendance was Uachtaran CLG, Liam O Neill.

Moninne’s opponents in this final were St Patricks (Limerick) and the standard of hurling was extremely high from both sides with the lead changing hands at least six times during the match.

St Patricks made the brighter start to the game and led by 1-3 to 0-0 after nine minutes of play but this Moninne team were not going to lie down and they struck back with 1-2 of their own with Ultan McEneaney grabbing the goal and Geoghegan both of the points which left their side trailing at the break by 1-3 to 1-2.

Moninne went in front on the resumption when McEneaney scored the second of his three goals in this final. Midway through the half the sides were level at 2-4 a piece before the Kilkerley lad completed his hatrick to restores his sides lead.

A brace of goals from one of the St Patrick midfielders stunned the Moninne team and supporters but try as they might to grab an equalising score which included hitting the crossbar and post late on, time ran out on the Dundalk boys as they lost out on a final scoreline of 4-4 to 3-4.