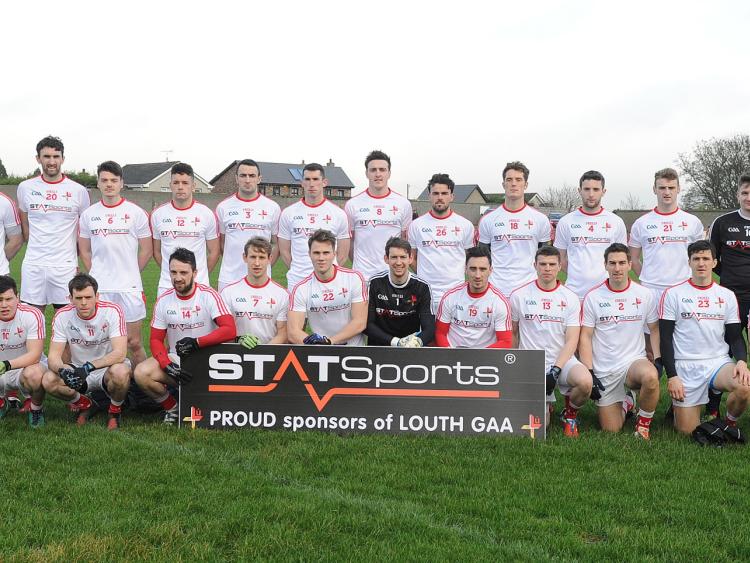 The Louth team that played against Carlow. Picture: Arthur Kinahan

You could tell it was a long week for both Louth and Carlow on an aptly muggy afternoon in Dowdallshill last Sunday.

With the known prospect of facing Meath going into their third and final O’Byrne Cup group game, Louth just simply wanted to get this game out of the way. Fortunately, they did so with a win that sets up a semi-final showdown with the old enemy on Sunday.

A free from Paul Broderick opened the scoring before Louth’s Derek Crilly continued his rich vein by hitting the home side’s first of the day.

That proved to be it for the opening quarter, and owing to the narrow pitch, both sides’ defensive systems were forced to reboot.

Louth then opened up a two point lead thanks to efforts from Tommy Durnin and Anthony Williams but Shane Clarke countered swiftly for Carlow after a Louth move broke down.

Paraic Smith made amends by scoring from the side before full debutant Ross Nally burst into action by winning and scoring a free.

In the next passage of play Carlow took over. Darragh Foley replied with a free of his own to reduce the score to 0-5 to 0-3 before John Murphy blasted a penalty to the net after Padraig Rath fouled the aforementioned Foley, as he was about to receive the ball in the small parallelogram.

Carlow received another boost when Kurt Murphy was shown a red card for an altercation with his marker right in front of not only the but a vocal Carlow bench.

The diminutive Nally coolly responded to settle Louth with a free and then a subtle was all Paraic Smith needed to engineer some space for himself to fire over in a bottleneck like Carlow defence. 0-7 to 1-3.

Despite being under the cosh for the majority of the first half Carlow exploited Louth’s disorganisation due to a lack of numbers at the back and scores from Alan Kelly, Ware and John Murphy put them into a two-point lead at the break.

The second-half saw a refocused Louth set about their business right from the get-go and John Bingham came up from the back to .

A sweeping move from the back involving O’Mahony’s duo Liam Dullaghan and Conor Martin then ended with Conall McKeever firing the ball the net.

It was the first glimpse of the afternoon what Louth can do when they are not feeling as leggy.

Eoghan Ruth scored the first of his three points before Declan Byrne was awarded a disputed point after the referee Chris Dwyer overruled his umpires.

The sparkling Nally scored from play and a free either side of a Broderick dead ball to made it 1-11 to 1-8.

Suddenly the game swung on its head when Broderick turned provider, his shot dropped short only for Darragh Foley to punch the ball into the net.

Quick-fire points via Ruth and Foley again meant Carlow were now leading by two but a brace of classy Nally frees levelled the contest only for Carlow to score two in a row through Broderick and Ruth.

Knowing a draw would suffice, Declan Byrne had a shot parried over the bar before Derek Maguire went for the levelling score. However, it didn’t quite have the distance and Carlow goalkeeper Molloy, who came on at , cruelly misjudged and got under the ball and it broke kindly for the onrushing wing-back Anthony Williams to tap home.

Substitute Gerard McSorley buried an emphatic goal home at the death to kill off Carlow’s hopes, setting up a semi-final battle royale with Meath in Navan on Sunday.