Past and present come together to officially open Darver 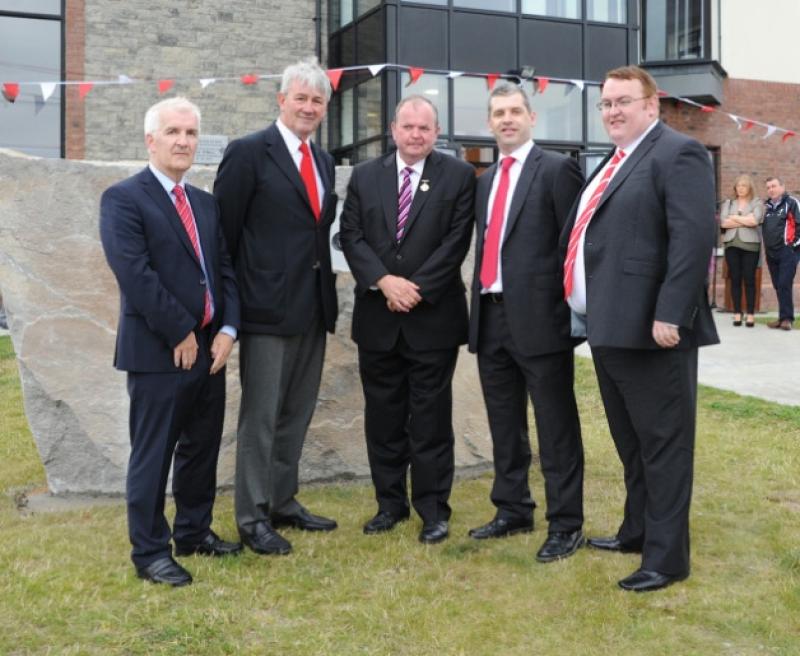 The red and white bunting was up, the gravel was levelled and the potted plants were out in force last Friday evening.

The red and white bunting was up, the gravel was levelled and the potted plants were out in force last Friday evening.

The official opening of the Darver Centre of Excellence by GAA President Liam O’Neill drew a crowd from all around the county. The car park was near full and the centre never felt so alive as on that evening.

Former county chairmen were dotted here and there. Peter Brannigan, Frank Lynch among others; all in attendence to see the work started by the Darver Committee finally receive the recognition it deserved. After taking Liam O’Neill for a tour around the Centre, incumbent chairman Padraic O’Connor started the formalities with an address to the crowd following the end of the U8 all-county blitz on the pitches.

He thanked Liam O’Neill for making himself available to cut the ribbon on the centre, despite a busy schedule at this time of the year, and for his support for the project right through his term as chairman of the Leinster Council.

Mr O’Connor then proceeded to praise the work of those that had initiated the project.

“To the members of the original Darver committee”, began the current chairman, “who through their dedication and perseverance took this project from a set of plans to what you see before you today. They are Paddy McMahon, Seamus Kirk, Pat Toner, Colm Marry and the late Brendan Carthy, who remains in our thoughts, especially tonight.

“I have a special word of welcome to Brendan’s wife, Mary, and her three sons,” added Mr O’Connor, to much applause.

The project would not have been possible, added O’Connor, without the work and effort of those responsible for the construction of the centre in the first place.

“To the construction company, Gladstone Limited, and their director David Rogers for the high quality of work and dedication which they applied to the contract. Denis Williams who was the engineer of the job. The members of the executive committee of the GAA in Louth for their hard work and managing the centre in a professional and business-like fashion.”

Those responsible for the ongoing running of the centre were praised highly by Mr O’Connor, both for their work in the past and on into the future.

“To the current management committee of the centre for their ongoing hard work in maintaining and managing the centre, especially for tonight - Pat Cunningham, John Richardson, John Byrne, Peter Bannon, Jim Thornton, Jason Hoey along with our county secretary Des Halpenny and PRO Bob Doheny.”

Turning to the future, Mr O’Connor was hopeful that the centre would prove a huge asset tin the improvement of the games within the Wee County.

“The Darver Centre of Excellence is a huge asset to Louth GAA in the ongoing development of new and young players. The facilities here are second to none and the challenges that Louth now face are to ensure that the standard of our games improve in the immediate future to reflect the high standard of these facilities.

“We see here tonight a number of our young undeage players taking part in the blitz. These facilities are designed to facilitate their development both on and off the filed to ensure they develop into the senior couny players of tomorrow.

Once Darver parish priest Fr McEnroe had delivered the blessing, the formality of the ribbon cutting fell to President Liam O’Neill and the Darver Centre of Excellence was officially opened.