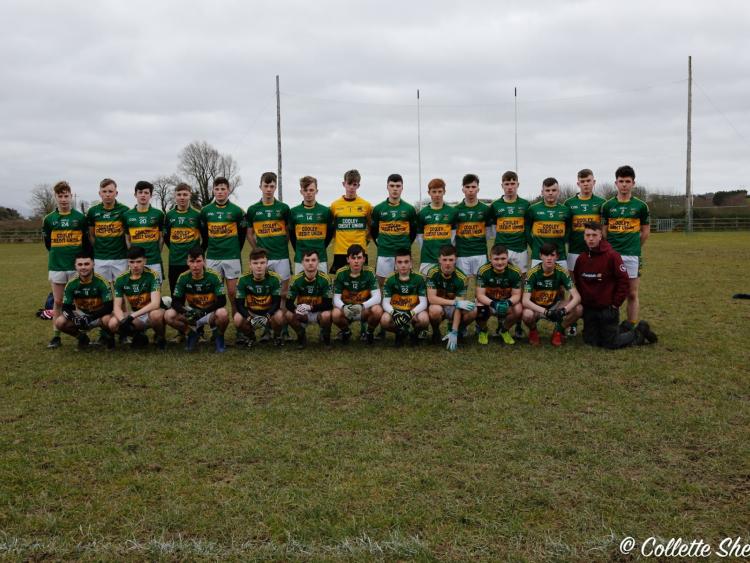 The Cooley Kickhams/Cuchulainn Gaels team which saw off Kilkerley Emmets/Naomh Malachi in the opening round of the Division One league on Saturday afternoon.

St. Joseph’s/St. Mochta’s minors began their Division One campaign with an impressive victory against O’Raghallaigh’s in Drogheda on Saturday afternoon.

The combination established themselves early in the fixture and led 1-7 to 0-2 at the interval, with Ben Smyth and Kyle McElroy converting the home side’s points.

O’Raghallaigh’s were improved after the interval and a goal from Lee Grifferty breathed life into their charge, though the visitors steadied to build a lead which not even Ben Sweeney’s late goal could eat meaningfully in to.

Cooley Kickhams/Cuchulainn Gaels ensured Kilkerley Emmets/Naomh Malachi’s Division One title defence got off to a losing start at Páirc Emmiti.

The peninsula outfit were 4-8 to 0-2 to the good at the interval with Cian Connor and Pierce Hulme hugely influential.

Wolfe Tones/St. Nicholas withstood a strong second half fightback by Naomh Fionnbarra/Lannléire to begin their Division Two campaign with a win.

The winners, backed by a strong first half breeze, were 1-7 to 0-2 to the good at the interval, their goal coming from a penalty.

Tones/Nicks took their strong form into the second half, going 4-8 to 1-6 in front, only for the visitors to return fire, scoring two late goals before the clock pipped their bid at taking something from the game.

St. Bride’s and St. Patrick’s played out a 2-6 apiece draw in Knockbridge on Saturday, in what proved to be the proverbial game of two halves.

Cian O’Connell’s early goal had Pat’s leading with the aid of the breeze and while the Lordship side felt they were wasteful during the opening half, points from Darren Connor, Aaron Mills and Gavin Meally had the visitors nursing a 1-5 to 1-1 lead at the break.

Bride’s began the second period strongly, before being reduced to 14 players, but when Ethan McGinn hit the net for Pat’s, they were on course for victory.

But the lead was just two with 10 minutes to play and even though a man down, Bride’s showed tremendous spirit to equalise on the stroke of full-time.