The mystery of the Castletown 'Mouth Puller' in Dundalk 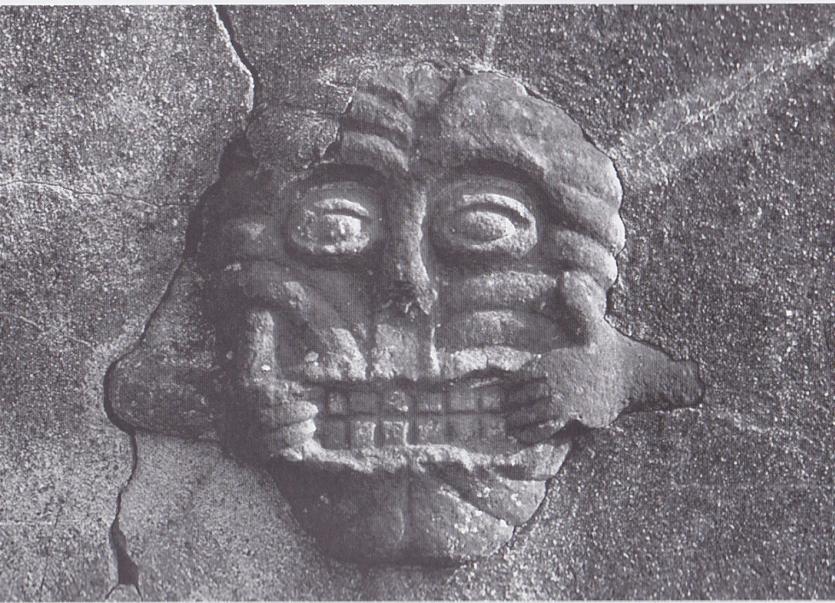 The Castletown 'Mouth Puller' has intrigued me for many years. It is a grotesque carving set in a wall opposite the front of the St. Louis Secondary School at Castletown. It is a grinning face with two hands pulling at the sides of a mouth with large teeth.

The surprising thing about the stone is that it seems to have only attracted interest in fairly recent years, even though it is clearly a very important national artifact.

Not a lot has been written about it but there was an excellent article published in the Louth Archaeological Journal, dated 2007, written under the name Vanessa Houssaye (The late Vanessa Ryan from McSwiney Street, daughter of Jim Ryan, former Dundalk and County Councillor).

In it she writes - 'The earliest analysis of the Castletown mouth puller occurred in 1925 when H.C. Lawlor briefly included it in his study of medieval grotesque carvings which had been incorrectly labelled as seela-na-gigs (which are carvings of a sexual nature which are, surprisingly, to be found at or near early Irish churches)'.

Vanessa, in her article, does not come to any definite conclusions regarding origin or functions of the 'Mouth Puller' but in the conclusion states -

'What can be established, however with a reasonable degree of certainty, is that, despite its appearance, this mouth-puller is more likely to date from the late fifteenth century rather than the twelfth century, as had been previously suggested'.

It is one of the finest examples in Ireland of this type of medieval carving which is thought to have been created made to ward off evil spirits from churches or fortified houses.  It may have been made for the nearby tower house known as Bellew's Castle, built in 1472 by Sir Richard Bellew, or as a gargoyle ornament for the now ruined church of St. John in the old Castletown Cemetery.

It reminded me of an article I had spotted in a Tempest's Annual of more than eighty years ago.  In this the Editor, who was probably Harry Tempest, published what he referred to as 'Some Old-time Notes on County Louth'.  The introduction explains that they were taken from a manuscript in Trinity College, written by Capt. T. Biglow Williams which was never published.

The manuscript, Tempest states, contains notes of all kinds about all the counties of Ireland but the part printed in the Annual are about County Louth.

The Editor remarks 'Many of the notes are mistaken or mis-informed but we have printed all as it stands'.  These notes do not mention the Castletown 'Mouth Puller' but there are references to the origins of  the castle nearby, known as 'Bellew Castle'.  Under the heading 'Moate of Castletown' the notes state -

'The English Pale or the district exclusively in the hands of the Anglo-Norman invaders, in which the English Law alone was paramount, extended from Dundalk to Dalkey and was marked by a boundary ditch, studded at intervals by strong castles   -----   (the) Castle of Castletown Bellew was erected by Richard Bellew, which was thus recorded in an Act of the Parliament held at Naas (Edward IV 1480, vol. 2, Sept. 12) – “Richard Balor (Bellew) Esq. Has built and finished a Tower in the Castletown of Dundalk  on the Border of the March of the County of Louth and intends to build another anew in the same towne, enacts, that he shall receive and take 12d. off every townland in the County of Louth for the building of the same”.

This Castle, which consists of  a large 4 storied keep, flanked by towers, is still in good preservation.'

The introduction says of  the Captain Biglow Williams manuscript -- 'Its date must be later than 1864 when D'Dlton's History of Dundalk was published' but does not give a reason why the editor thought this to be the case!