The Easter Rising and that plaque on Clanbrassil Street 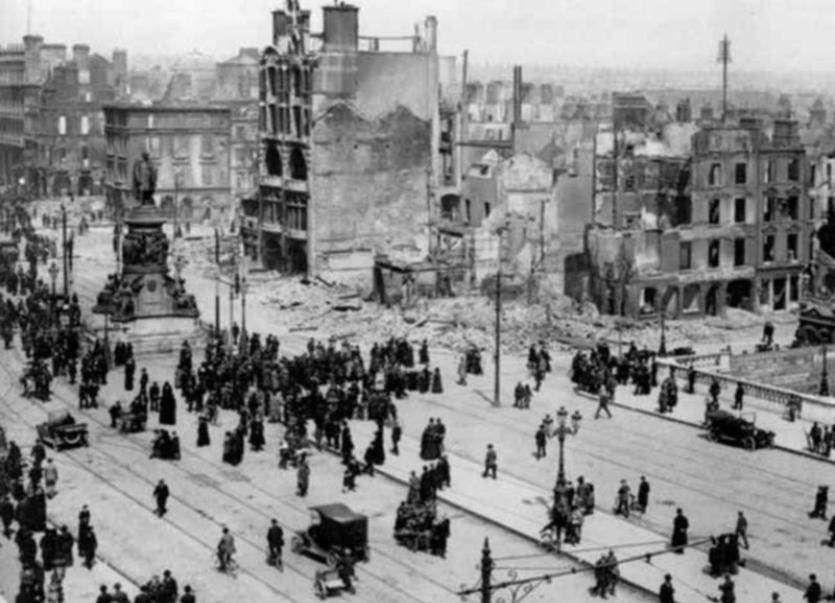 A small stone plaque on Clanbrassil Street, above the passers-by eye line, commemorates a momentous moment in Dundalk’s history.

One spark was lit in 1910 when a small group of local men dared to defy the assembled might of the British military and RIC in Dundalk Square, who were about to proclaim of the accession of King George V to the throne. The little band of Dundalk men stood with a small green flag within the protective precinct of the Maid of Eireann statue, the memorial to the Fenian Rising of 1798. While assembled British military and RIC intoned “God Save The King”, the band of Dundalk men replied with a rousing rendition of “God Save Ireland”. The Sheriff read the riot act to quell them, but to no avail. They proudly stood on the private property of the flag stones around the Maid of Eireann statue and raised the green flag on top.

At first, the Irish Volunteers only numbered 13 members. Many Dundalk men, believing the British promise of Home Rule, went off to fight in World War 1 on the British side answering Redmond’s call. Paddy Hughes was the driving force of the Irish Volunteers in Dundalk. Famous speakers, such as Countess Markiewicz and Major John MacBride, came to Dundalk to give speeches. The Irish Volunteers began to grow. Arthur Greene and Peter Kieran were detailed to manufacture ammunition in the John Boyle O’Reilly Hall in the lead up to Easter Week which was procured by another Volunteer, Sean MacEntee. This untold story of war participation is related in the video, “Dundalk 1916 Rises”, filmed and directed by Marcus Howard.

Donal O’Hannigan who was Commandant of the Louth volunteers, was given the plan by Patrick Pearse in St. Enda’s. He was to mobilise the volunteers in the area at the Hill of Tara in Meath on Sunday where he was to read out the Proclamation of the Irish Republic for historical reasons. This carefully constructed plan by Sean MacDermott was kept in a safe in Dawson Street. Pearse also instructed that they were to march to Blanchardstown to meet up with the Dunboyne men and to seize the railway at Blanchardstown and cut the line there to prevent British artillery coming from Athlone. They were to form a flank with the Fingal and Kildare men in order to form a ring around Dublin City which was twofold in it’s aim. One, to prevent reinforcements from the British side entering the City. This ring had a second purpose, to provide an evacuation route out of Dublin City for the Irish Volunteers which was relayed to O’Hannigan by Pearse.

Paddy Hughes broke the news to Sean McEntee that word had come that the Rising was on. In the film, “Dundalk 1916 Rises”, the little plaque on Clanbrassil Street begins the story of the brave men of Dundalk who mobilised for the Easter Rising with few arms, lots of enthusiasm and a great store of courage. Despite Eoin MacNeill’s countermanding order to call off the Rising, the Dundalk men steadfastly proceeded on their journey, unlike many others throughout Ireland. Back in Dundalk James McGuill and Sean McEntee sought proof of Eoin MacNeill’s signature on the countermanding order. It turned out to be real. The question of getting the dispatch to the Volunteers made every moment important. Over forty Dundalk men met another 50 men at The Workhouse on the Ardee road. In a flurry of activity, O’Hannigan attempted to seek clarification on whether the Rising was definitely going ahead or not by sending a number of dispatches to Dublin. According to James “Judge” Dunne 97 men left Workhouse Hill. On reaching Slane, the Volunteers were accompanied by 60 RIC men. The Volunteers and the RIC then occupied opposite ends of the bridge at Slane. Suddenly Sean MacEntee arrived at Lurgangreen with news from Pearse, “Dublin is in arms, you will carry out your original instructions”. The Dundalk men immediately swung into action, arresting two of the RIC men who were trailing them.

Meanwhile, they carried onto Castlebellingham. Word eventually came that the Rising was on and they began to commandeer cars. According to Donal O’Hannigan’s Witness Statement No.161 “I had about 28 men at the time…I organised these in two squads and on the double employed one squad to the south of our position and one to the north. This was to surround the RIC… I then declared to all present, including the RIC., that a Republic had been proclaimed.” The RIC surrendered but Sergeant Wymes refused to surrender documents. O’Hannigan threatened him with a revolver. Wymes produced notes on all the Volunteers movements. Eighteen officers, five cars and their drivers were taken prisoner from Fairyhouse Races. They proceeded in a convoy to Castlebellingham on their way to Slane stopping for provisions.

“The RIC men in the local Castlebellingham Police Station, they came out to see what was happening, so they were approached by MacEntee who told the two RIC men to stand alonside the railing. Shortly afterwards Constable Magee arrived on bicycle and he was asked to dismount and they searched him and there was a dispatch taken from him. Soon after another car arrived and it was Lieutenant Dunville who did not want to come out of the car. There was a bit of aggression shown by him. They told him he would be shot if he did not stand along the railings so he did so. Then Sean MacEntee decided it was time to leave the village and he told Paddy McHugh to make sure that the RIC men and Captain Dunville remained at the railings. When the cars were leaving the village it was thought that Captain Dunville made a move to get an arm. There was a fire shot by Paddy McHugh but Paddy often claimed that a second shot went out that evening but nobody claimed responsibility for the other shooting. Charles McGee fell, he said ‘Oh my arm I’ve been shot in the arm. He fell and Captain Dunville he was also shot. A doctor came to the village, Dr O’Hagan and it was clear to him Charles McGee was in difficulty. Charles McGee was taken to the old Louth Hospital at 7.30 and he died at 9.30 that evening ” According to Madge Boyle, grand niece of Charles McGee who features in the film. According to Hugh Kearney’s Witness statement no.260 Major Dunville had been paticuarly cross and had attempted to take a rifle from one of the Volunteers and in the melee Major Dunville “got shot but not seriously.”

O’Hannigan continued sending dispatches for orders. Peter Clifford met James Connolly in the GPO who declared upon hearing their exploits “the brave men of Louth.” Due to British cordons it was too difficult for him to get back to the men. Similarly O’Hannigan and his men had to stop at Tyrellstown House for the same reason. The Meath men now met up with the Louth men and they proceeded to Tyrellstown House. In the meantime Sean MacEntee had become disconnected from the group and made his way to the GPO where he took part in the O’Rahilly charge down Moore Street.

The heavy gunfire coming from the City could be clearly heard from Tyrellstown House. Donal O’Hannigan went on to find Thomas Ashe while the rest of the Volunteers stayed in the house awaiting orders to proceed. Ashe had arranged to meet on Saturday but had been arrested. Word came that a battalion of Lancers with two field pieces were going to surround them and if the Volunteers did not surrender they had orders to shell the place. O’Hannigan announced a demobilisation. The Lancers arrived within an hour of the Volunteers evacuating Tyrellstown House. The military were advancing on their present position. The Volunteers decided to stand their ground but they passed by. They were only 13 men left from the original 90 by the time they demobilised because word had been brought that Dublin had surrendered. Arthur Greene recalled “we all felt disappointed.” They oiled and buried their ammunition and returned to Dundalk. 30 were arrested and marched to the jail and were sent by strong military escort to Richmond Barracks in Dublin where they were tried and several were interred in Frongoch, Wales.

This is the story commemorated by the little plaque in Clanbrassil Street in Dundalk.