On the Canvas: Knocking doors has become a part of life for ‘young gun’ John McGahon 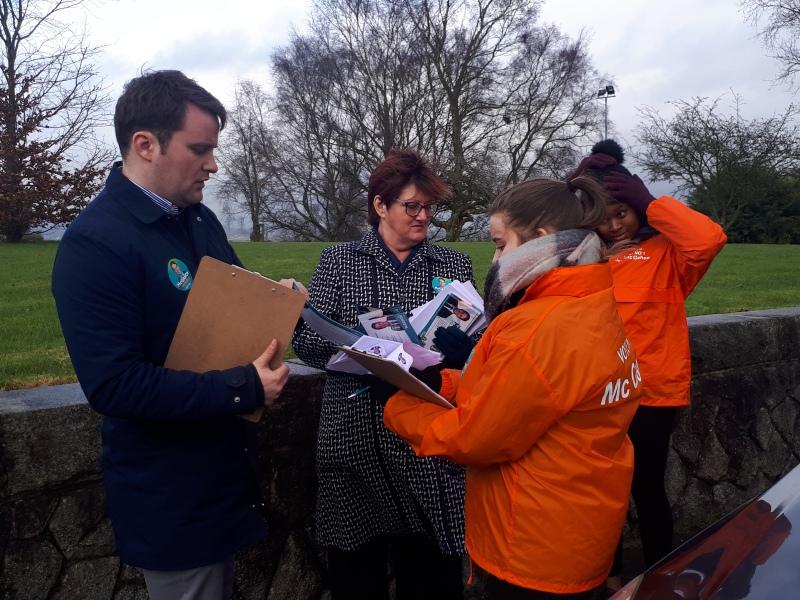 On the Canvas: Knocking doors has become a part of life for ‘young gun’ John McGahon

His uncle, ‘Flash’ McGahon, who owned a well-known shop on Francis Street in the town centre, is still as much of a favoured talking point on the doors as his other uncle Brendan is, when John McGahon goes out canvassing these days.

That famous slogan “Flash needs cash and his brother needs your votes” is part of McGahon lore. Mention it to anyone of a certain vintage and it'll draw a knowing smile and a brief reverie back to a bygone era.

While he is undoubtedly proud of that lineage, Mr McGahon says he’s his own man and he’s clearly out to forge his own political path.

At 29-years-old he’s fought and won local elections, but a general election is a step up. The vision is greater and the scope of the issues involved moves from helping to get a footpath fixed, to bringing issues of greater, broader importance to the doorstep of Leinster House.

The McGahon canvassing team are decked out in orange, branded windbreakers today, and are carrying clipboards as the Democrat arrives up outside the Church of the Holy Redeemer in Ard Easmuinn.

It appears an efficient machine, well-oiled at this stage. Mr McGahon has been on the campaign trail for the best part of a year. He got in early, ahead of the crowd. The worst kept secret of a general election had been on the cards for some time.

His sister Ruth is with us today. She has the air of a woman who has a job to do and the honed ability to organise the crew with ease.

It’s ten days out from the election. The Democrat projects a week into the future and asks Mr McGahon what he’ll be doing in those final hours leading up to election day?

“I’ll still be knocking doors. There might be a moratorium before the election, but that’s only for the media, I’ll be out talking to people and on the day of the election I’ll be ringing people to see if they’ve already gone out to vote, and if not, I’ll organise a lift for them.”

At the first door on this afternoon’s canvas, a woman in her early 40s answers. She’s polite and listens to Mr McGahon as he introduces himself and what he brings to the political table. She listens patiently.

Then she talks about the previous night.

Her young son sustained a head injury and they had to rush to Our Lady of Lourdes Hospital in Drogheda.

She reveals that a six hour wait ensued before her son was seen to. Mr McGahon nods and tilts his head.

The woman says they eventually got home around 4am that morning.

She’s not angry recounting the story, mind you, she pleads with Mr McGahon about the need for further, vital resourcing for the health sector in the northeast.

There’s no point debating any successes and Mr McGahon nods along with the mother's point, adding his desire to improve on this. He wishes her the best and heads back onto the street.

Around the corner a woman with blonde hair and decked out in one of the McGahon windbreakers is introduced to the Democrat. Her name is Yvonne and she’s from Carlingford. She’s quick to add that she has no political affiliation, but is returning a favour for Mr McGahon after he helped her out previously.

Further up the road is Mr McGahon’s aunt Trish and Ruth - it’s a truly family affair this afternoon. He says there’s been a plethora of other young and energetic people on the trail with him.

He adds that he’s had, between morning and evening canvasses, a team of 25 helping him over the past few weeks. He mentions a “pizza appreciation night” which will be held at his office on Clanbrassil Street on Friday to thank those that have volunteered and gone the extra mile (both literally and figuratively) for him over the past month.

That HQ on Dundalk’s main street is the base of operations, from there Mr McGahon and his team have planned his campaign. Mr McGahon will admit that very little has been left to chance. It’s a testament to the organisation going on behind the scenes, he says.

Ard Easmuinn is quiet this Wednesday afternoon. The school run has not yet dropped, so the roads are clear too. At another house, a woman in her 50s, clearly a fan of Mr McGahon’s, shakes his hand and thanks him. During his stint as a local councillor he had helped her with a thorny issue concerning the installation of communication infrastructure beneath the footpath outside the house.

“It was about building up a relationship with them really,” explains Mr McGahon about dealing with the company in question and getting the problem resolved.

He projects himself as a fresh, young voice for the area. He’s the youngest candidate seeking election in Louth, so it’s a clever and rock-solid approach. He wants to help people in their 20s, 30s and 40s, he says.

“The issues they are concerned about include childcare costs.

Housing issues also pop up regularly on the doors. He mentions the 40,000 homes provided by his party during their time in government. However, everyone knows the housing shortage is a problem to which a sustainable solution has yet to be found.

He’s also passionate about selling Dundalk as a location to work and do business in. The recent arrival of WuXi Biologics on the Mullagharlin Industrial Park should be a source of great positivity for the area, Mr McGahon says.

“A friend of mine, his dad used to work in Dublin for years. He’d get up at 5.30 in the morning and head to Dublin. He wouldn’t return home until after seven.

Mr McGahon says that some 5,000 people leave the Dundalk area every day to go elsewhere for work and employment. He posits as to why they cannot live and work in their hometown.

“Why shouldn’t they get their education here at DkIT, and then get a job here too?”

While finding the right jobs for those who wish to live and work in Dundalk is one thing, attracting people from beyond the town and county to come to Dundalk to work is also part of this grand ambition, adds Mr McGahon.

“Dundalk should be a hub for the northeast. Why not have people from north Dublin coming to Dundalk to work?”

While he’s spent time canvassing in mid-Louth lately, later that afternoon will see him head further down the Carrick Road, towards Mounthamilton and Lis Na Dara.

And on it goes.