On the Canvas - Mark Dearey: ‘It’s such an important decade’ 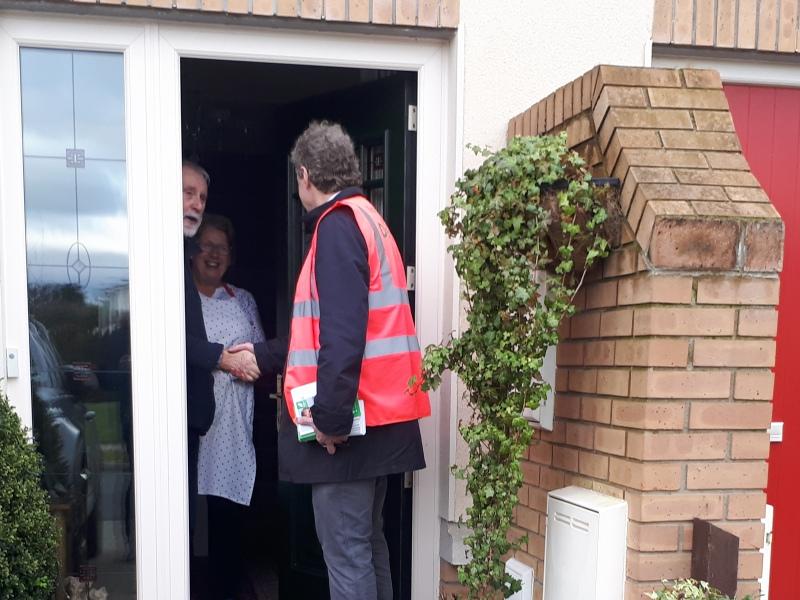 Mark Dearey says that, although he had not been considering a general election tilt last year, the local election canvassing in April/May 2019, helped guide his thinking and decision to run this time around.

Mr Dearey is a totemic figure for the Green Party locally. His name and face synonymous with green issues for two decades now.

There's a feeling that he's match-fit after that 2019 local election campaign. In football parlance, you could say it was a good pre-season ahead of the real deal.

On the canvas in Blackrock, he ponders as to why he finally decided to run in this election. He uses a Father Ted reference to highlight his thinking.

“It was like Mrs Doyle over Christmas,” he explains with smile, “I had people saying to me: ‘go on, go on, go on; ya will!’”

In the end, after what seems like a lot of consideration, he decided to put his name on the ballot.

However, speaking to Mr Dearey during those local elections in 2019, did reveal a slight hint of what was to follow.

There was a fresh buoyancy and energy to him that afternoon at the count centre last May. The so-called ‘green wave’ was one of the big headlines coming out of those elections and the pride on Mr Dearey's face that day was obvious. The growing coverage of serious environmental issues in the intervening period has been unstoppable. Taking a look at the Green Party's manifesto, The Democrat questions the slogan: ‘A decade of change’. Mr Dearey says he feels like it captures the zeitgeist perfectly.

“It’s the start of a new decade and it’s such an important one,” he adds.

“I’m trying to talk to grandparents and get them to realise the importance of having a future for their grandkids. Get that vital message across.”

At one door in Stamanaran, off the Old Golf Links Road in Blackrock, a couple in their 60s answers. The husband is keen to talk, and Mr Dearey is just as eager to engage. The gap between the rich and the poor is something the husband feels is growing larger.

He feels that every election campaign is the same: promises made, promises not upheld, and then new/rehashed promises made once again - the endless cycle continues. There’s a real sense of frustration here. Mr Dearey says that his outlook, and that of the Green Party, has always been more long term - less election-cycle based. But he does admit that that long-term type of policy-making hasn’t always been politically advantageous for the party. But he says he’ll not be swayed.

A woman in her 30s pulls up the drive of her home in Stamanaran, she emerges from the car, hands and arms full, using her chin to keep everything from spilling over. Mr Dearey sees her predicament: “You’ve your hands full, there, I’ll not keep you. But I’d appreciate your vote.”

Further down the Old Golf Links Road, a teenage girl ushers Mr Dearey to come up the drive. She’s full of enthusiasm and eager to speak with Mr Dearey. She quizzes him on his chances in the election. Mr Dearey is effortlessly diplomatic and delicately sidesteps making any concrete predictions.

It’s rare to see such ebullient and youthful interest in local politics.

Blackrock, Mr Dearey readily admits, wouldn’t be known as a Green Party stronghold, but regardless, he says he feels the environment matters to everyone.

At another house, he queries a painting on the wall inside the hall. It's from Sarajevo, the woman says. But there’s no need for a hard-sell here - she’s giving Mr Dearey her first preference.

Out canvassing today is Liam Gaynor, he’s been campaigning with the Green Party for years, and he’s got an almost bullet-proof sense of optimism about him. He genuinely feels every door is a real opportunity to get another vote.

Further along, we arrive at the entrance to Tuite’s Lane, Mr Dearey ruefully recounts the battle over planning for a major housing development.

Members of Louth County Council raised concerns on behalf of residents last year, it was to little avail in the end, adds Mr Dearey - An Bord Pleanala granted permission.

That one still hurts, but the battle continues.