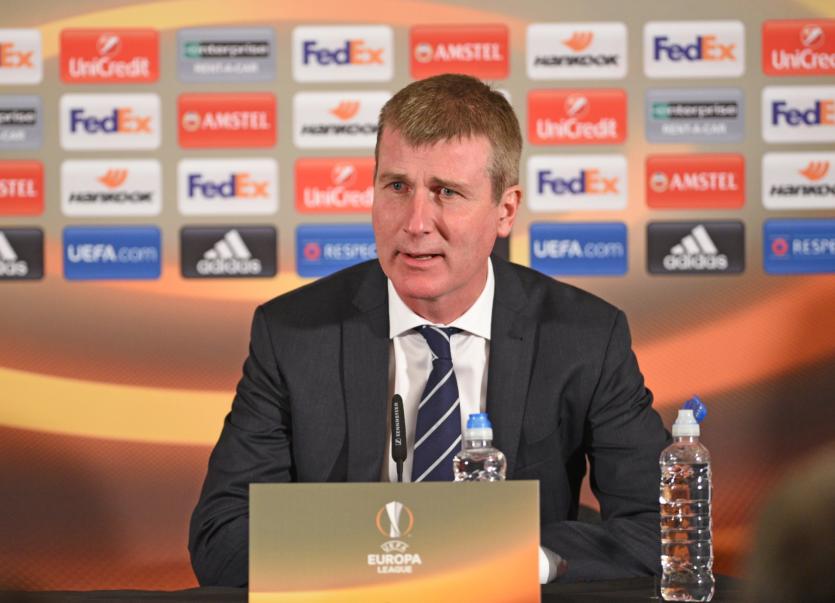 Dundalk manager Stephen Kenny hailed another ‘famous victory’ for his side after The Lilywhites beat Maccabi Tel Aviv in Tallaght on Thursday night.

Ciaran Kilduff’s winning goal secured Dundalk another place in the history books as the first Irish club to ever win a game in the group stages of a European competition.

And, speaking afterwards, Kenny said his side were full value for a win that leaves them in second place in Group D.

“It was a brilliant performance. Maccabi Tel Aviv been in the Champions League group stages regularly. They have been the top team in Israel and they are all international players.

“But we showed tonight that our level of play was very high. We played exceptionally well and created a lot of chances. We were worthy winners, there is no question about that.

“They’re all top teams and we certainly haven’t looked out of place so tonight is no surprise in that regard.”

This was Dundalk’s eighth European tie of the season and Kenny feels his side are getting better and better with every game.

“Yeah, we’re more confident and less inhibited. It’s important not to be fearful of players because they have reputations or a familiar name.

Dundalk asked questions of the Israeli side right from the off and the only thing missing from an assured first-half display was a goal.

“We can say we were unlucky but we just weren’t clinical enough,” said Kenny. “Every time we got into the final third we created chances.

“Patrick McEleney had about three, he was frustrated at half-time not to score, Daryl Horgan had a couple and Ronan Finn had one so we had a lot of chances.”

Kenny’s side continued to threaten in the and the moment that every Dundalk supporter will remember forever arrived in the 72nd minute.

Substitute Ciaran Kilduff, scorer of the equaliser against AZ Alkmaar in Holland on Matchday One, anticipated a Daryl Horgan cross to sidefoot home and send the majority of the 5,5543 crazy.

“It was a great cross from Daryl and a brilliant finish from Ciaran. I’m delighted for him. He’s had a tough season and it has been well documented about the fractured vertebrae and the knee ligament injury.

“He has of character to come back and get the goal in Alkmaar and again tonight. They are big European goals and his goal per minute ratio is up there with anyone.”

Dundalk second place in the group, two points behind leaders, Zenit St Petersburg. Both clubs meet in the first part of a in Tallaght on October 20 but Kenny’s side have five domestic games to worry about first.

“We’ve five games and Zenit only have one in the same period. It’s a real tough schedule. It’s punishing and I can’t describe it as anything less than that so our preparation won’t be great for Zenit in that regard.

“Nevertheless, we’re delighted to be in this competition and we’ve put in two brilliant performances and fully merit the four points we have.”

Next up for Dundalk is the small matter of an FAI Cup semi-final against Kenny’s old club, Derry City, on Sunday afternoon.

“Derry had a terrific season and we will have to switch on quickly and utilise our squad.

“We’ve only two a bit days to recover. That’s the nature of where we are now. It’s a relentless pursuit but we won’t let up.”