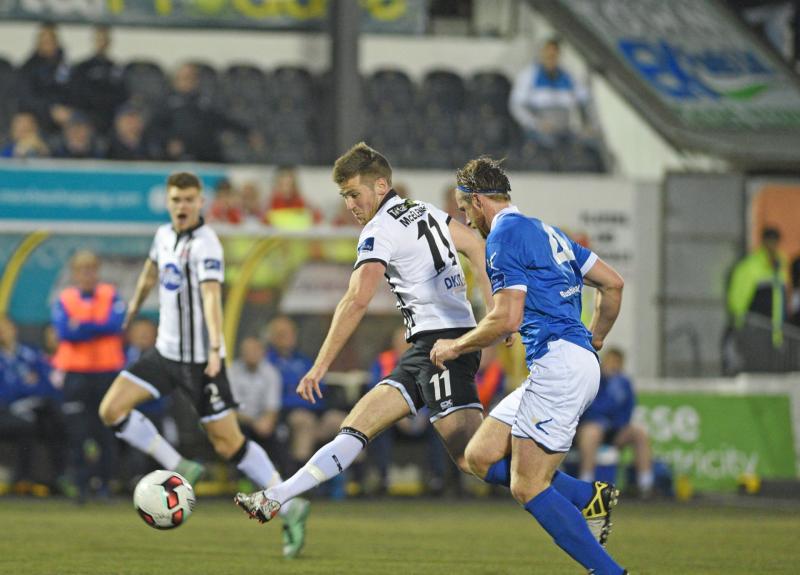 Goals from Patrick McEleney and Daryl Horgan propelled Dundalk 10 points clear of Cork City at the top of the SSE Airtricity League table as they overcame a stubborn Finn Harps side at Oriel Park.

Playing their first league match at home since July 5, it looked like it would be a straightforward night for Stephen Kenny’s side when Patrick McEleney opened the scoring after six minutes.

However, the league champions struggled after that and it was only when Horgan rammed home a in the 75th minute that the Oriel Park faithful could finally relax.

With their Europa League opener against AZ Alkmaar just three days away, Kenny rested the likes of Stephen O’Donnell, Ronan and Brian Gartland but his starting XI still contained attacking such as David McMillan, Daryl Horgan and Patrick McEleney.

Harps arrived with a host of players, including Barry Molloy, Sean and Ethan Boyle all missing, but Ollie Horgan was able to select Josh Mailey, who was a doubt before the game.

After conceding 10 goals in their previous two outings against Dundalk this season, it was understandable that the visitors lined out with a flat back five but they were put under the cosh right from the off.

Just four minutes had elapsed when John Mountney’s cross took a wicked deflection off Ciaran Coll but Ciaran Gallagher, who missed the corresponding game here in March because he couldn’t get the time off work, made a superb stop to tip it over the bar.

Dundalk would have craved an early goal and they got it two minutes later. McEleney picked the ball up deep and ran at the Harps back four before picking his spot from 20-yards and planting a fine finish inside Gallagher’s right-hand post.

Daryl Horgan then fizzed an effort at the Harps netminder in the 11th minute, Gallagher showing safe hands, and he made an even better stop minutes later, getting down to his right to get a strong wrist on Mountney’s wicked drive.

The champions continued to dominate but the Harps goal wasn’t threatened as much as it was in the early stages and the nearest Dundalk came to opening the blue bank of players up was on the half hour mark.

Some fantastic footwork by Chris Shields in the middle of the park allowed him to thread a beautiful ball into McMillan’s path but Gallagher was quick off his line to collect.

Barrett then saw a downward header, from a McEleney free-kick, come back off the crossbar in the 44th minute as Harps made it into the dressing room just one goal behind.

The second half was only seven minutes old when the visitors lost Ruairi Keating to what looked to be a serious injury, the striker carried off on a stretcher.

Dundalk lacked the intensity of the opening stages and with just a one goal lead, the natives in the stand became restless as the game wore on, especially when Keith Cowan rose to meet a Ciaran Coll free kick in the 63rd minute, the header forcing Gary Rogers into his first meaningful bit of action of the night.

The game sparked into life six minutes later when Ollie Horgan was sent to the stand for protesting about a yellow card to his goalkeeper. Referee, Neil Doyle cautioned Gallagher for time wasting, despite the fact that Dundalk preparing to bring on , Ronan Finn!

Finn was involved almost immediately, setting up McEleney for a crack at goal which Gallagher did well to parry, but he made a major contribution in the 75th minute, picking Horgan out from the right for the winger to smash the ball into the roof of the net and secure the points for Dundalk.