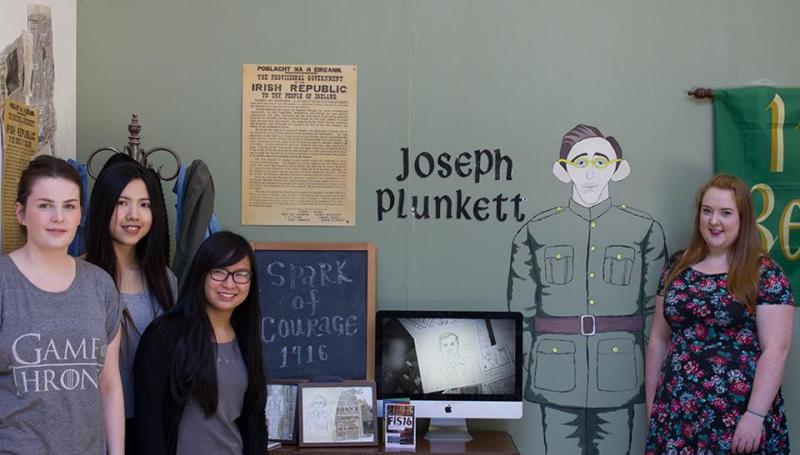 It has been a busy and successful first academic year for the new Department of Creative Arts, Media and Music since its establishment in September 2015. The Department is home to an innovative range of programmes and has hosted numerous events, as well as travelling globally to engage in international events. One year on, the Department is looking forward to welcoming a new cohort of students to support them in their quest for similar success.

The new Department has transformed to become a creative hub within the institute, bringing together programmes in the area of music, film and creative media. Located in the state-of-the-art Carroll Building, students have access to modern TV and recording studios, performance venues and discipline specific lab spaces. The new Department will ensure that DkIT is at the forefront of Creative Arts Education in Ireland, while simultaneously celebrating the rich cultural heritage and talents of the North East region.

Over the past year, the Department has made significant contribution to centenary commemorations at the Institute. Music students performed at the flag raising ceremony on Proclamation Day and presented a concert of traditional music related to and inspired by the Rising entitled Éirí Arís. Final year Creative Media students developed projects incorporating the theme of ‘Independence’ and showcased their work at the 2016 Fís exhibition on campus. Music students have been exploring various themes associated with the year of celebration and considering the great stories and memories that have been preserved in music, poetry and song. Furthermore, a postgraduate student has just completed a scholarly edition of Ómós don Phiarsach which was composed by Aloys Fleischmann in 1979 to celebrate the centenary of the birth of Patrick Pearse.

The DkIT Ceol Oirghialla Traditional Ensemble has continued to develop its reputation on the international stage and was chosen once again to perform at the International Society for Music Education Conference held in Glasgow in July. As part of their Scottish tour, they also performed at Speyfest 2016. Symbolic of the new synergies that have been created in the new Department, two students from the BA (Hons) Film and Television programme were funded to accompany the tour and create a television documentary for broadcast this autumn.

Other successes for the Department during the year have included winning the ‘Comedy and Entertainment’ Category at the Royal Television Society Awards and the selection of fourth year project Where’s My Ladies for the IFI Spotlight event in April, which previously won the 2015 Best Documentary Award at the Fingal Film Festival. Niall Gallagher from Year 3 of the BA Communications and Creative Multimedia was awarded the Grand Prize in Adobe's Take Ten Contest and 4Youth, a project devised by four Creative Media students was shortlisted for an eir Spider award in the Best in Charity and Non-for-profit category. A documentary completed by Alannah Murray, a second year student on the BA (Hons) Film and Television Production programme, was selected for screening at the Galway Film Fleadh and a documentary by a student on the BA Video and Film Production, Karl Walsh from Balbriggan, was selected for screening at the Guth Gafa festival in Kells, Co. Meath. BA (Hons) Applied Music graduate Carrie McCarthy was awarded 2nd prize in the Ninth Annual Council of Heads of Music in Higher Education Undergraduate Musicology Competition.

The new Department is ably led by Louth native, musicologist Dr Adèle Commins. A graduate of NUI Maynooth with first class honours degrees in Music and Irish and Higher Diploma in Education, she also holds an ALCM and LGSMD in piano performance. In addition to playing piano, she is an accomplished piano accordion player and soprano and is Musical Director of two local church choirs. She has presented her work in Ireland, England, Norway and Australia and other research interests include music education, instrumental pedagogy, performance practice and music editing. Recent publications include contributions to the Companion to Irish Traditional Music (ed. Vallely, 2012) and the Encyclopaedia of Music in Ireland (ed. White and Boydell, 2013). She was a project leader in the Erasmus Intensive Programme ‘Creative and Aesthetic Learning’ in Ireland, Norway and Belgium 2011-2014 and has toured internationally as a performer in recent years including performances this summer in France and Canada.