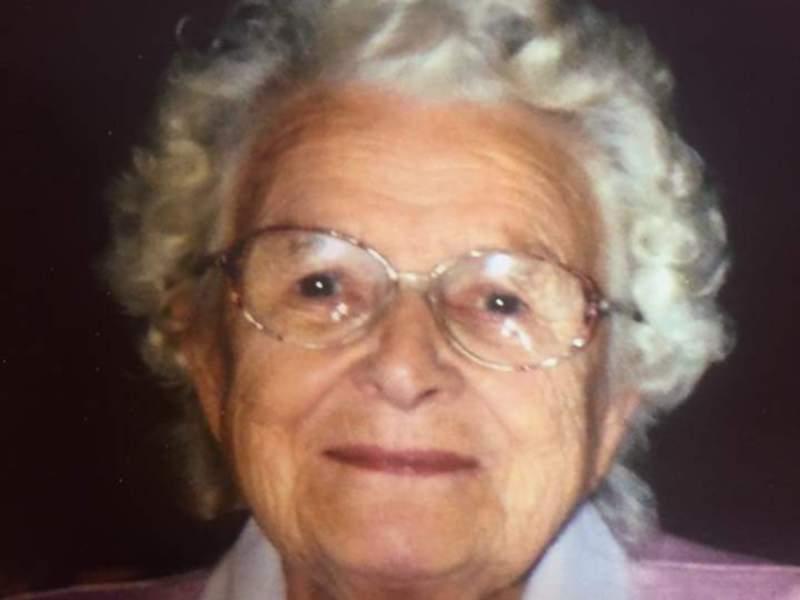 The death took place on the 17th of January, of Eithne Uí Uallacháin, An tAscal Fada, Dún Dealgan, in her 97th year.

She passed away very peacefully in the early hours of Tuesday morning with her family around her bedside.

She was born on the last day of 1920 in Cullyhanna, Co. Armagh, a place she loved very much all her days and to which she returned on many an occasion. She was the daughter of Michael Devlin, the local schoolmaster, and Violet McPhelimy.

Though her mother was not educated herself she believed strongly in the value of education and was proud of the fact that all 8 of her children got 3rd level education, a rare occurrence in rural Ireland in the 1930s and 40s.

Eithne was educated in Cullyhanna Primary School, then by the Louis Order in Middletown and Kilkeel, and finally at UCD where she studied English, Irish and Maths. There were not too many girls studying Maths in UCD in the 1930s. She qualified as a teacher and taught in the Sacred Heart Grammar School in Newry until her marriage in 1944 to Pádraig Ó hUallacháin (Paddy Weldon) a teacher and school inspector from Dundalk. They both had a great love for Irish and the spoken language of their home was always Irish. They had a family of eight; Éamonn, Méabh, Lorcan, Pádraigín, Ruairí, Íde, Eithne agus Feilimí; all eight were teachers. Eithne really believed that there was no career more important to society than that of a teacher.

She stopped teaching to rear her family and when her youngest child, Feilimí, reached school-going age Eithne went back to teach in the Sacred Heart and taught there until the 1970s.

When her husband Pádraig died in 1974 she began teaching in the Vocational School in Dundalk and she taught there until 1981 when she retired. Great sadness struck her in subsequent years with the tragic death of her two youngest, Eithne and Feilimí, her daughter-in-law Breda and her dear grand-daughter, Aoife.

Her retirement years were dedicated to her family, especially her 20 grandchildren whom she loved very much and whose progress in life she followed with great interest and enthusiasm. All came from many parts of the world to be present at her funeral and all played a part in her funeral service with readings, music, gifts and prayers. A very poignant and powerful moment was the carrying of Eithne’s coffin into the Church by her four grand-daughters, Róisín, Clíodhna, Gráinne and Bróna.

Eithne lived at home on the Avenue Road until her 94th year when her health began to fail and she needed full-time medical care.

She went into the Abbey Nursing Home in Blackrock and she was very well cared for by the kind, compassionate and professional staff there. Her family were most grateful for that care.

The family were also greatly heartened by the wave of sympathy they received from many quarters on Eithne’s death.

Hundreds went to her wake in the Abbey and to her funeral mass in Irish in the Holy Family Church, read warmly by Fr. Brian Mac Raois, a friend of the family. He was assisted by Fr.Chris O Brien (London) and by a number of other priests. The music was provided by her own children and grandchildren; Pádraigín, Ruairí, Méabh, Dónall, Róisín and Clíodhna. She was buried in St. Patrick’s Cemetery, Dowdallshill with her husband, Pádraig, and her son, Feilimí. The pipes were played at her graveside by her son Ruairí and the Salve Regina was sung. A note of hope and optimism was struck by the presence of almost all of her 23 great-grandchildren around her grave, all under 10 years of age.

Eithne inspired numerous people with whom she came into contact. She had many strong qualities, none more so that her great ability to keep going, regardless of the trials and sadness that befell her, in the form of illness and the death of loved ones. Her Month’s Mind is in the Church of the Holy Family, Dundalk, on Sunday 19th of February at 11 o’clock Mass.