A political legend in county Louth 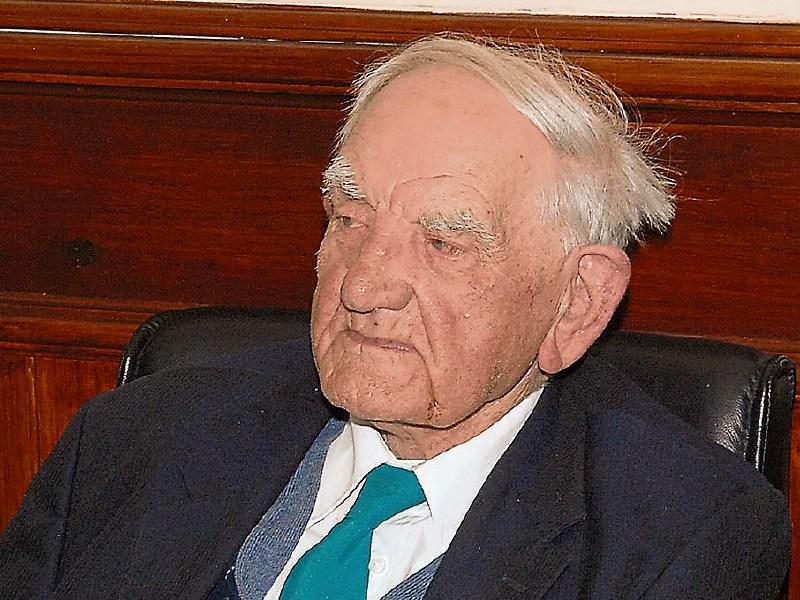 Edward (Eddie) Filgate who died on January 19 held the dual distinction of being the oldest surviving member of the Dail and was one of the three successful candidates, with Padraig Faulkner and Joe Farrell who achieved Fianna Fail's greatest success in the Louth constituency

Eddie lived virtually all his life in Louth Village where he was born on September 16 1915. He also lived in Dublin, Kildare, Clare and Tipperary for short periods as work demanded. It was in Kildare that Eddie met his future wife Eilish with whom he had five children. Anthony the youngest son sadly died at the young age of 26 years.

Eddie's father James Filgate was involved in the struggle for Independence and Eddie who was very interested in history and who had a reputation as an entertaining raconteur often recalled how during his childhood years the Black and Tans would drive into the village looking for his father who, forewarned would escape across the fields.

Following in his father's footsteps Eddie was elected to Louth County Council in 1960. He served the local community diligently becoming one of the longest serving councillors, until his retirement from that post in 1991. Eddie was also involved with many subsidiary bodies in the county and served at the highest level on Louth VEC and as a member of the North Eastern Health Board,

In 1977 graduating to national politics Eddie was selected as a candidate for the Dail, and Fianna Fail took three out of the four seats. Altogether he served five years in Leinster House, having been re-elected at the 1981 and February 1982 general elections He did not seek re-election in the November 1982 election.

Eddie was one of 11 children of James and the former Margaret Woods. There was a clever and ambitious streak in the family which was inculcated by their father who introduced them at an early age to Shakespeare.

Eddie was noted as exceptionally bright by his local master Mr Randalls who was willing to sponsor him as a student in further education. Family circumstances and the times in which he lived dictated the necessity for Eddie to work.

Initially Eddie worked for Bord na Mona attending classes at night, eventually becoming area manager. Indeed it was Sean Lemass (prior to his prime ministerial days) who pointed Eddie in the direction of Bord na Mona. Later he joined Roadstone Ltd in Dublin as sales and marketing manager. However Eddie retained a life long thirst for learning. He was largely self taught but built up a vast wealth of knowledge on diverse subjects.

Gregarious by nature Eddie loved the company of people and was known as a "bit of a wit". He could be extremely funny in conversation. Eddie loved opera and in his earlier years was involved with amateur dramatics often producing plays written by his father. He was a chess player and was highly successful at competition level.

Eddie also played postal chess with residents of prisons around Ireland. He loved poetry and published a book which was mostly concerned with poems from his schooldays, as well as a history of the Church of the Immaculate Conception in Louth. He was intensely interested in the history of Louth in particular and spent much time exploring the history of his family name.

He was very proud of his grand children who live in various parts of the world, who have been able to avail of the life choices which were never available to him.

He was predeceased by his wife Eilish in 1989, and son, Anthony. He continued to live independently on his own with the support of excellent home care until August last. He then became a resident of Moorehall Lodge Nursing Home, Ardee where he died peacefully.

After reposing in Moorehall Lodge on the Saturday, Eddie's remains were removed on Sunday afternoon to the Church of the Immaculate Conception, Louth. Mass was celebrated by Rev Sean McArdle PP.

His grand niece Elaine O'Malley delivered the eulogy, while the Readings were given by his grandchildren, Tariq and Sakeena.

The Prayers of the Faithful were led by Maura Mahon, who also took up the Offertory gifts along with grand-daughter Mairead Filgate.

The Church choir gave generously of their time and amazing artistry during Eddie's funeral Mass. His burial took place in Louth Cemetery. One of Eddie's favourite pieces of music Mozart's Laudate Dominium, accompanied the funeral from the Church to the grave.