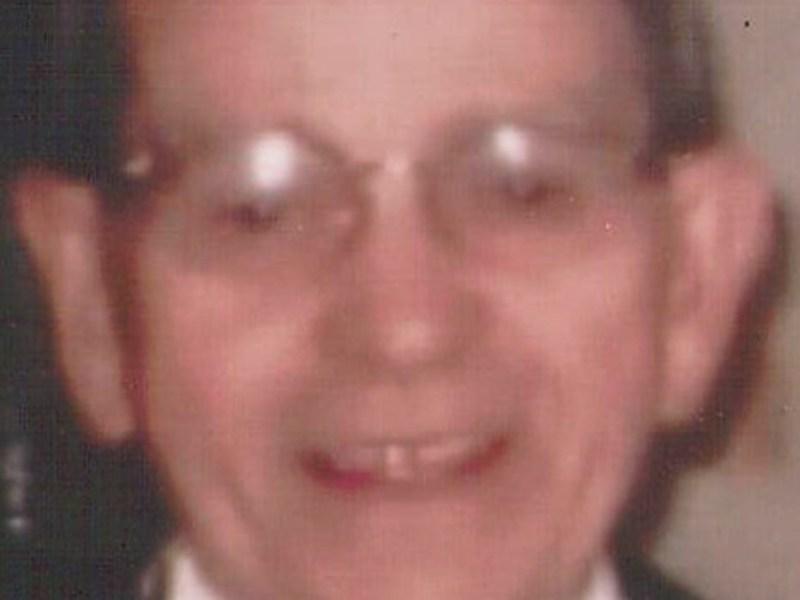 Barney Smart who died suddenly on January 4 was well known for his passion and involvement locally in the sport of greyhounds and was a founder member of the Pearse Celtic soccer club from Pearse Park. He was also a talented cross country runner as a young man who won a collection of medals and cups and worked all his working life in the local shoe industry.

He lived most of the 60 years of his married life in Pearse Park and as a true and very caring gentleman with a heart of gold who worked his hardest to raise his large family he is so fondly remembered by his wife Nuala, children and grandchildren for whom he lived.

His sudden passing in Our Lady of Lourdes Hospital after taking ill at Christmas was a shock and a cause of much grief and sadness for them. For he was a very active man until three years ago and while his health declined he was still going about his daily chores.

His passion for greyhounds and exercising them kept him fit out walking his dogs about the town. When he gave up his involvement in the sport with the old Greyhound track closing on the Ramparts he got a Labrador dog and gained plenty of exercise walking him, and loved the craic with those that he met on his walks. After retiring he loved to go out on his bicycle and did a lot of the household chores, including shopping, cooking and cleaning. He also took a great pride in his garden, and loved seeing it look its best and was very protective of it.

He was the youngest son in the large family of boys and girls of Josephine and Billy Smartt and was brought up in Distillery Lane and attended the Christian Brothers School. He started work at a young age, entering Rawson’s factory where he met Nuala McConnon from Pearse Park and they married. When Rawson’s factory burned down Barney gained employment in Clarks and then C Step which rose from the ashes of the closure of Clarks which was a major blow to employment in town.

The couple set up home in Marian Park and then gained a swap and moved to Pearse Park, close to where Nuala’s mother lived in the estate. Most of their 12 children were born in Pearse Park, and Nuala had her hands full as a full-time mother and housewife. Barney in his younger days was a fine cross country runner, but greyhounds became his main hobby. An Irish named bitch whose name translated “Run My Love” was promising in his early days in the sport but suffered an injury and had to be put down.

He loved taking his dogs to the schooling track at Red Cow. His most successful dog was “What you Saying” which won a number of open races. His dogs all competed at the Rampart track, and a number of his sons shared his love of the sport. He gained a great thrill from winning, but once the Rampart venue closed in 2000 Barney like others withdrew from the sport. He switched from walking his greyhounds to his pet Labrador, and gained further exercise from being out and about on his bicycle. He derived great pleasure from his regular Lucky 15 bet on the horses, at which he was quite successful. He enjoyed a weekend social outing, being a frequent patron of Benny Brady’s (Central Bar) in Clanbrassil Street and in later years “The Jockey’s” and “Wee House” in Anne Street, which were closer to home.

He possessed a very fine voice and loved to sing, with “Working Man”, “Willie McBride and "The Town I Love So Well” the favourites in his repertoire. He was not a man for flying—he only once flew to undertake work training in England while in Clarks, and it didn’t do any good for his nervous system. His view was “if God wanted me to fly he would have given me wings.”

So holidays were spent in Ireland, in the like of Killarney, Listowel and Gorey, and his family have great memories of the annual factory holiday break in Clogherhead , with neighbours in the estate. Barney enjoyed relaxing with a drink and a sing song in the local bars, and the break coincided with the Galway and Goodwood race meetings that gave him an added interest and source of pleasure.

As he moved on he loved to see his grandchildren, and was very proud of them, and keenly interested in what they were doing. He retained his faculties to the end. His family attribute his mental and physical well being to his healthy appetite combined with his active lifestyle. A favourite dish of Barney’s was fresh cod and a carton of peas as he just loved fish.

With a young population in the Pearse Park estate Barney along with Don O’Callaghan RIP, Owenie Hanratty, Johnny Woods RIP and Gene McMahon formed Pearse Celtic to give them an outlet to play soccer. The players had a great respect for the mentors, and Barney‘s sons Kenneth and Brian played on the team, while Colm was also a noted player in local junior football in more recent times. During Barney’s time the club won the Brian McConville Cup, and it’s most famous product was Steve Staunton who went on to gain a record haul of caps for Ireland, and captained and managed his country. The team was a great focus for residents with families going to watch games across the road in the Friary Field. Barney from his work days and through the football had a very close friendship with fellow co-founder of the team Gene McMahon. Gene visited him every Friday, and they shared their love of horse racing and other subjects. Neighbour Brendan Scollon who also was highly involved in the team and still is in the Summer League, also was a constant visitor at Christmas, but this year Barney was ill when he called,

His “other son” Liam Cunningham passed away eight years ago, and his death broke Barney’s heart. For he called to Barney every morning

After reposing at his residence on the Friday morning, Barney was taken on Saturday morning to Saint Patrick's Cathedral for Funeral Mass. The concelebrants were Father Mark O’Hagan Adm and Father Gus Champion OP, with the eulogy delivered by Father O’Hagan.

His grandchildren were centrally involved in the Mass. The Readings were given by Liam and Alison, with the Prayers of the Faithful led by Adam, Aaron, Ryan, Niall, Leigh and Jillian.

The Offertory Gifts were taken to the altar by Cathy and Rachael.

The music was provided by organist Brendan McCourt and singer, Sarah McCourt.

Month’s Mind Mass is on Sunday, February 5 at 11.30am in Saint Patrick’s Cathedral.