Alan follows in his father’s footsteps 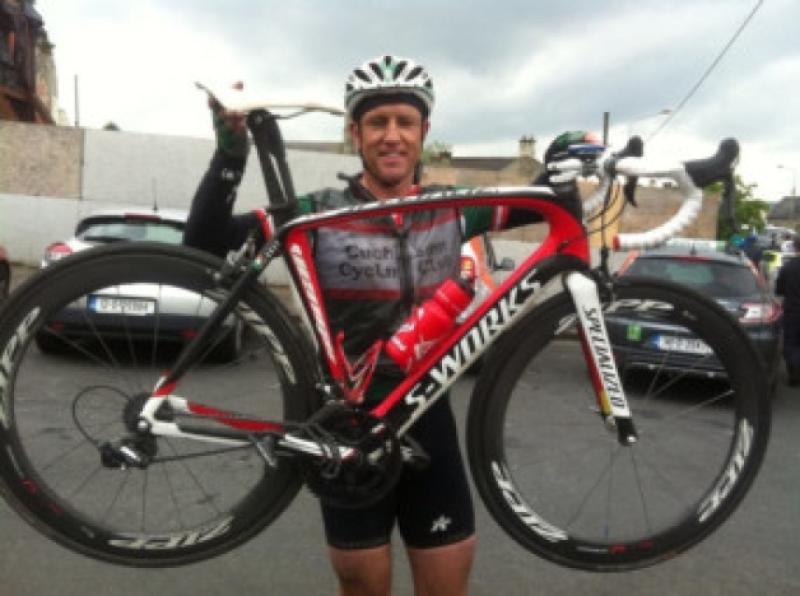 Austrian Clemens Fankhauser may have won the An Post Ras but for those who attended stage seven in Baltinglass on Sunday the abiding memory will be of Cuchulainn Cycling Club’s Alan Gray running across the finish line, bike in his arms.

Austrian Clemens Fankhauser may have won the An Post Ras but for those who attended stage seven in Baltinglass on Sunday the abiding memory will be of Cuchulainn Cycling Club’s Alan Gray running across the finish line, bike in his arms.

Gray, part of the Louth South team made up of cyclists over the age of 40, arrived in Baltinglass after 100k of hard cycling and was gearing up for the final sprint when his chain wrapped around the crank, rendering his bike useless.

After such a grueling cycle, many competitors would have simply thrown in the towel. Not Gray, however, as he explains.

“I’m from a triathlon background so the legs simply fired up when I got off the bike. The streets were lined with people and they saw the leaders go across the line in seconds. Everybody thought that was it but then they realised there was a fella running to the line, carrying his bike,” he laughed.

The incident sums up Gray’s character.

A nasty back injury, sustained in a Newry Three Day race in 2009 looked to have called time on his cycling career and he began to focus primarily on Setanta Triathlon Club, where he became the main organiser.

That all changed when Karl Dolan informed him of his intention to enter an Over-40 team into the Ras, rekindling a personal goal of Alan’s.

“My father Martin smoked and drank all his life but he packed them in and did the Rás two years later in 1993. Ever since, I’ve always had it in my head that I’d love to do it.”

With that followed a demanding training schedule that began in the first week of November. Gray stepped things up again at the beginning of the racing season in February, taking part in 16 races prior to the main event. All the hard work paid off when he completed the final stage to become a ‘Man of the Ras’.

Alan returned home, his body weary after eight months of hard work but he is already looking to what’s next.

“I’m going to take a break for a few weeks and then decide if I’ll enter the National Vets Championship but I’d love to go back to the Ras and do it again.”