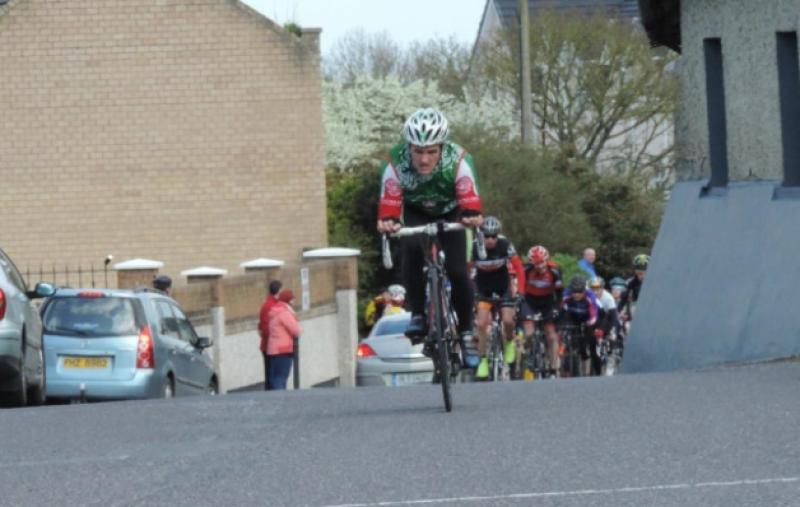 Cuchulainn Cycling Club’s Alan Bingham recorded a fantastic win in the A4 race in Stamullen on Sunday last.

Cuchulainn Cycling Club’s Alan Bingham recorded a fantastic win in the A4 race in Stamullen on Sunday last.

Alan is no stranger to success in Stamullen. As far back as 1991, he took a bronze medal as a fair faced junior in the National Junior Championships.

Sunday’s race featured three ascents of the long and steep Snowton Climb, which saw the bunch split to pieces. Alan was in the thick of the action all day and approached the line for the final time as part of a select group. On the slight rise to the finish Alan put in a blistering kick to take a solo win.

In the A1 race on the same day, which featured six ascents of the same hill, Gary Sheils, Colm Quinn and Liam Dolan all came home in the main bunch. Quinn had had an active day and spent a lot of the race up the road but unfortunately is efforts came to nothing.

The first round of the FPM Accountants Summer Cycling League saw some 60 riders sign on. In the B League, twice former winner of the league, Jordan Flood took a solo win riding away from his compatriots in group four.

Meanwhile in the A League, it was the youngest competitor in the race taking the win, when 14-year-old Lorcan Kilkenny rode away from everyone else in group one for his first league win, in his first ever league race! Surely one for the future.

On Sunday last, Carrickmacross Cycling Club hosted a 90km North East Tour. Fifteen cyclists from Dundalk took part and rolled out in glorious sunshine, however the weather took a slight turn for the worse when a strong wind reared its head. Particularly difficult was the section along Port Beach when crosswinds coming off the sea battered the riders, however all made it back to Carrick via Dromin, Ardee and Tallanstown and thoroughly deserved the tea, coffee and treats at the end.