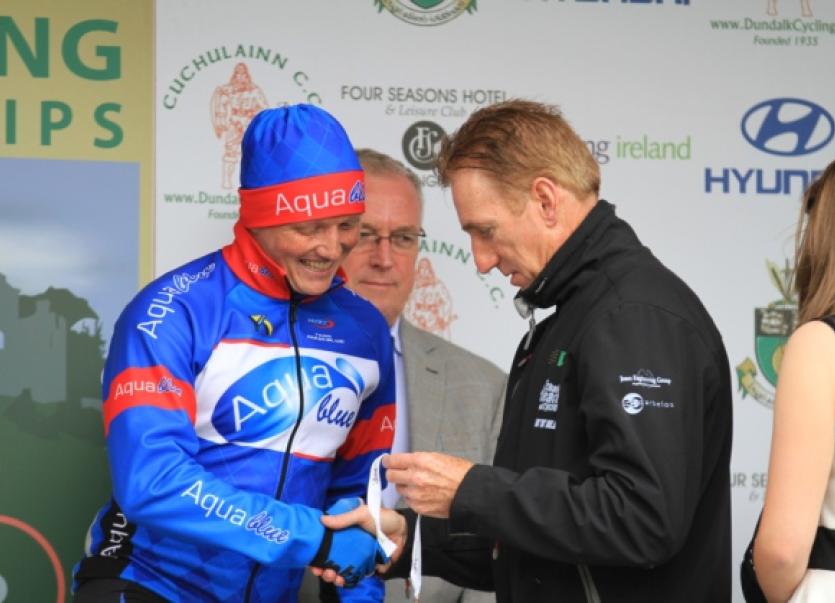 The action kicked off on the Thursday night with the 40km Time Trial Championships, going from Carlingford almost all the way to Dundalk and back.

The men’s event was once again won by the defending champion Michael Hutchinson in a blisteringly quick time of 50:07. At one stage club president Pat O’Shaughnessy was following Hutchinson on his motorbike as the rider clipped along at over 60kph.

“He was so smooth you could balance a glass of wine on his back”, commented O’Shaughnessy.

The women’s title went to Caroline Ryan of Gardaí CC and the U23 title to Ryan Mullen. There was some local success with Eve McCrystal taking a bronze medal in the ladies.

On Saturday morning the first road race event of the weekend was the Vet’s Championship.

After a gruelling contest it came down to two men, defending champion Greg Swinord of Dublin’s Usher Road Club and Hugh Mulhearne of Carrick-on-Suir. As they approached the finish line, Swinord looked to be in the perfect position to repeat his win of 2013, however Mulhearne timed his acceleration to perfection to take the win.

Next up was the Elite Women, contesting the 104km Championships where all eyes were on defending champion Melanie Spatt.

The rain poured down on the women and over the seven laps a combination of crashes and speed saw a severely depleted main bunch start the last lap, within them Dundalk’s Eve McCrystal.

A number of attacks were attempted in vain and the bunch bore down on the line, where Spatt used her experience of criterium racing in the USA to take the win for the second year in a row, ahead of Siobhan McNamara and Mary Costello. Eve finished just outside the top six.

While the village was decked out in its finest, the weather would not co-operate with brutal winds and rain battering the 130 strong field. From the gun the attacks came thick and fast and as early as the second lap the winning break had been formed.

In the break where the danger men, defending champion Matt Brammeier, French based Dublin rider Philip Lavery and Donegal native, riding with a US professional team, Philip Degnian.

These three were joined by five others to form the elite group of the day. Degnian has been in outstanding form this season winning the Tour of Gila and netting a top 10 in the Tour of California. However disaster struck for him when he crashed out with some 40km to go.

Brammeier and Lavery broke away from the rest of the break to contest the win, where in a thrilling sprint Brammeier prevailed to take his 4th National Championship. Mullingar man Damien Shaw was next home to claim the bronze.

Overall the weekend was a huge success with many a seasoned cyclist saying it was the most professional and well run event the country has ever seen. Credit must go to the organising club, the Gardaí, all the marshals, sponsors Hyundai Ireland and The Four Seasons Hotel, Carlingford.