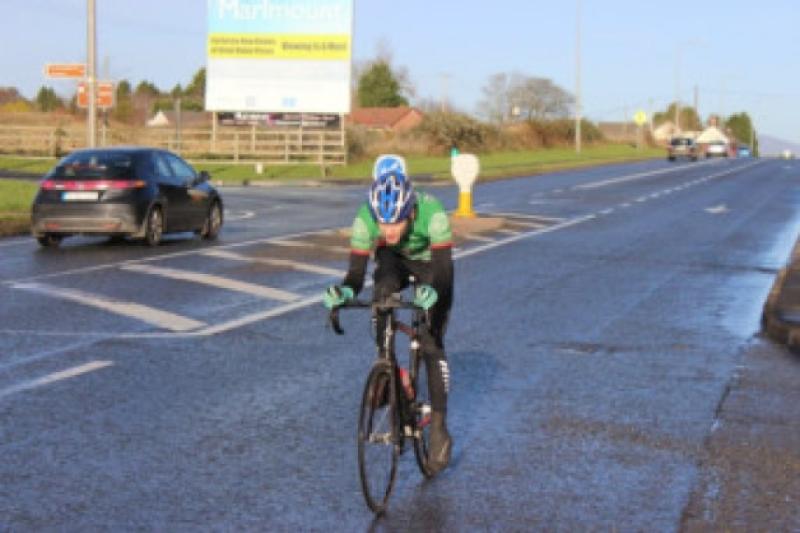 Dundalk’s Cuchulainn Cycling Club took its first win of the season when Stephen Carry won the A4 event in Drogheda on Sunday last.

Dundalk’s Cuchulainn Cycling Club took its first win of the season when Stephen Carry won the A4 event in Drogheda on Sunday last.

Ardee man Stephen who took up cycling in late 2012, has already tasted success by winning the 2013 FPM Accountants Summer Cycling League and 2014 was his first foray into open road racing.

He had already notched a few top 10 results but this was his big breakthrough performance, which will now see him upgraded to A3 status.

Stephen’s race was run over 50km and saw him win the sprint from Dublin’s Valdis Anderson and Galway’s Cathal Dilane in 3rd. Stephen’s clubmate Alan Kelly was close behind in 8th place. Also in action in Drogheda’s underage racing was Aaron Trainer and Conor McKeown

On Saturday in Banbridge, Liam Dolan took part in the 75 mile John Beggs Memorial Run over a tough course.

With 20 miles still to go Liam attacked from a group of 12 and forged on ahead with Ballymena’s Sean McIntyre. They managed to hold off the chasing riders but in the sprint Liam was found wanting, coming home in second position.

Alan Bingham was also in action in Banbridge in the A4 race and a brave attempt to win the race came up agonisingly short, when Alan was swept up by the bunch after a lone escape with less than one kilometre to go.

Also in action on Sunday were five Cuchulainn riders in the 70 mile Tour of the Mournes race hosted by neighbours Newry Wheelers.

Sean Loughrane was active early on and made his way into the break that lasted until the 45 mile mark. Liam Dolan, Gary Shiels and Niall Clarke were all unlucky to puncture, but having received quick wheel changes all three safely made it back into the main bunch.

Alan Grey was first of the Dundalk men home when he made it into the chase group by powering up the incredibly steep Rathfriland hill with some eight miles to go.

Meanwhile on the leisure front, 30 Cuchulainn riders tackled the harsh weather to complete the 50 mile Slieve Gullion Wheelers sportive. Rolling roads, wind and rain made for a hard day at the office,

This Thursday night sees the hotly anticipated start of the 2014 FPM Accountants Summer Cycling League. All details can be found at www.dundalkcycling.com