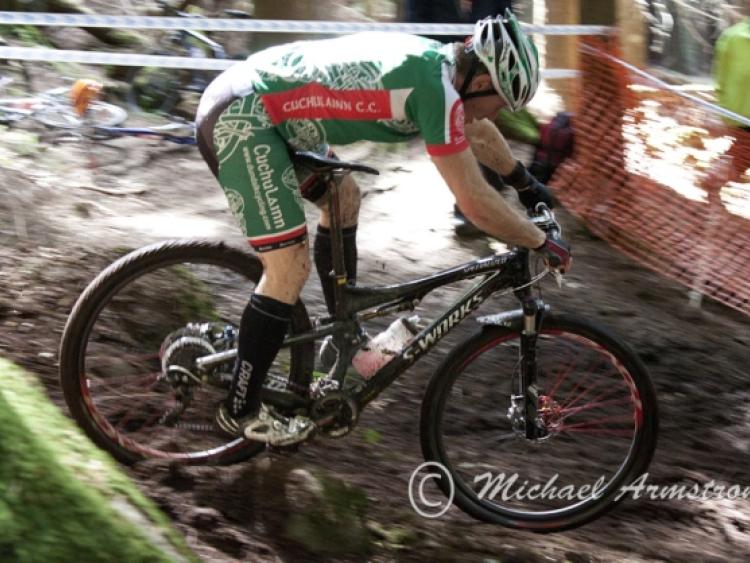 Tuesday last saw round 11, the penultimate round, of the Cuchulainn MTB league being contested, again on the open mountain.

Tuesday last saw round 11, the penultimate round, of the Cuchulainn MTB league being contested, again on the open mountain.

The course was marginally shorter at 10km but with significantly more elevation, lung busting climbs and a finish at the rock at the top of Aidan’s Canyon.

As is always the case, the riders started off in their handicap groups ahead of a testing course that examined the stamina, lungs and legs, especially the final climb which ramped up very quickly.

With the riders completing most of the course, all that remained was the descent into Aidan’s Canyon and the climb out and up to the rock at the top.

This is where places could be lost or won especially on the technical descent and climb out.

The remainder of the riders finished in three groups with some very close finishes, possibly the closest racing to date.

With only one round remaining and very few points separating the top riders, it’s anyone’s to win, or to lose. As always, thanks have to go to this week’s timekeepers, John Sharkey.

The final round will take place on Tuesday August 6 at 7pm, all visiting club riders and guests are welcome to compete as long as they hold a current 2013 Cycling Ireland Licence.

First to race was Conor in the U16 who, in the end was beaten into 2nd place place by a mere 20 seconds.

Gary and Shane, both in the S2 category, started off well but Shane had a mechanical in lap one and and lost around 15 minutes and sadly on his 4th lap he had yet another mechanical which resulted in his race being over.

Meanwhile Gary was battling it out with Christopher McGlinchey from Chain Reaction cycles, both lapping within seconds of each other, a battle royal.

Cruelly, Gary was beaten into 3rd place by the smallest of margins, one second, the blink of an eye.