Dolan is pipped at the post in sprint finish 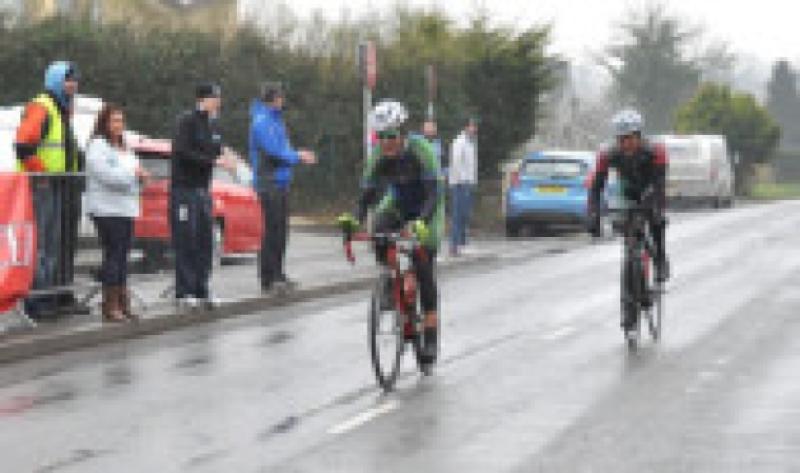 Cuchulainn CC came agonisingly close to taking its first outright win of the season when Liam Dolan was second in the Ciclisport Grand Prix in Moneymore on Saturday.

Cuchulainn CC came agonisingly close to taking its first outright win of the season when Liam Dolan was second in the Ciclisport Grand Prix in Moneymore on Saturday.

Dolan was active from the start and got into the main break after 10 miles of the 60 mile race. Team-mates Colm Quinn and Alan Gray, back in the bunch, hindered any chase efforts to ensure the break maintained it’s advantage.

On the final run into the finish Dolan attacked the break and got away with Belfast rider Mark Millar, who unfortunately had too much speed for Dolan in the sprint finish.

Both Gray and Quinn were racing again on Sunday in north Dublin, a 75 mile race which featured seven ascents of the dreaded Nag’s Head climb. Both had solid days to finish in the main bunch. Stephen Carry, FPM Accountants League Winner in 2013, was also racing in the A4 event and came home just  outside the top 10.

Sunday also saw the start of the Irish Veterans Cycling Association season, a league that has seen much Cuchulainn success over recent years.

In the main race, former national champions Sé Weston and Martin Grey finished in the top 10. In the second race Aidan Delaney, Dale Copas, Enda McKeown and Brendan Dunne all had successful debuts, despite a mix up with the actual location of the finish line.

The 18 round league is the stalwart of bike racing in North East Leinster and has been extremely successful in developing up  and coming riders.

The league runs on a handicap basis and caters for all, as evident from the fact that the 2013 winner, Stephen Carrie was cycling less than a year, yet won a competition that featured some of Ireland’s best road cyclists and An Post Rás participants. Details can be found at www.dundalkcycling.com.