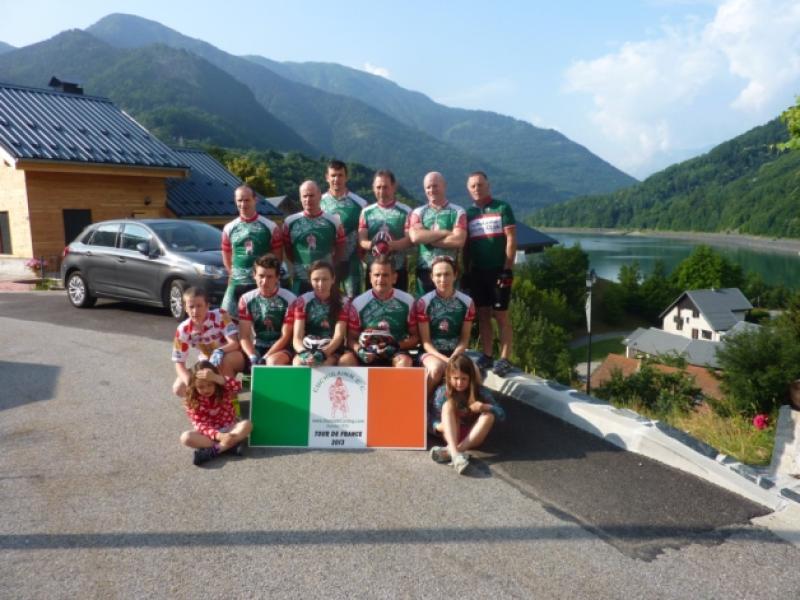 18 Cuchulainn Cycling Club members cyclists headed off to the Tour de France on July 12 to experience the pain and spectacle of the most famous cycling event in the world.

18 Cuchulainn Cycling Club members cyclists headed off to the Tour de France on July 12 to experience the pain and spectacle of the most famous cycling event in the world.

All members had trained studiously for the event. Participation in the Tour of Louth, the Wicklow 200 and the Ring of Kerry featured in some training programs but mostly it was hours in the saddle on the long summer evenings. However, nothing in the Cooleys could prepare them for what lay ahead in the Alps.

This 10 day trip was organised by club member Dominic O’Brannigan. The group ranged in age from 16 to 60. From people who cycled all their lives to people who were new to the club and had only bought bikes within the last 18 months. The centrepiece of the trip was to join other Irish supporters on the famous Alp d’Huez stage to cheer Irish stars Dan Martin and Nicholas Roche.

On the group’s ﬁrst test cycle Dominic broke the team in gently by bringing them on a 50k spin covering 30k of minor climbing.

Cuchulainn member Se Weston takes up the story: “There were no professionals here to motivate, the words of encouragement came from our teammates and watching others overcome their declared fears developed group and individual determination.

“Within our team Jason Boyle faced the additional challenge of having a weak right arm and right leg forcing him to do all breaking, gear changes and heavy duty pedalling with his stronger limbs.

“The next day we travelled 300km to experience Mont Venteux, stage 15 of the tour. We cycled 60k half way up the mountain in advance of the race and set ourselves up to spectate. We cheered Chris Fromme, the race leader, we roared at Dan Martin - our hero - who had won the 8th stage and we bellowed encouragement at Nicholas Roche.

“We then got back on our bikes to ﬁnish the climb and cycle the 50k back to our cars for the return journey. Arriving at base at 3am, everyone was tired but elated at our own ability to succeed and inspired by how everyone faced and overcame their personal challenges.”

A rest day followed for the group - spent visiting a picturesque village in the French Alps - who needed to conserve energy for the challenges ahead.

“The day before the tour’s Alp D’huez stage we decided to do the climb to experience its intensity”, said Weston.

“The day was made extra special by the addition of club secretary Karl Dolan and Michelle Dolan, who joined the group for the climb. We set off in our different ability groups letting those ﬁghting the hill most, go ﬁrst.

“All the Cuchulainn team made it to the top and assembled at the Tour de France ﬁnishing position for the photo.”

Weary minded, the group assembled the following day along with 1.8 million people on the mountain to watch the stage.

“We wore the green jerseys of Cuchulainn Cycling Club and were greeted by the occasional shout of ‘up the town’ by passing appreciative Irish fans. We cheered Newry and Banbridge enthusiasts and again we made our presence felt as the Irish cycling professionals passed and the granted us a nod of acknowledgement and appreciation as they recognized our ﬂags and jerseys.”

That was the only day that the group did not cycle as they took in peaks such as the Col d’Ornon, Cols du Grand Serre, Col du Glandon, building to the highest climb of the week, the Col de Galibier .

“This is a climb that lulls you into a false sense of security and kicks you when you are weakest”, said Weston. “The top two kilometres to the summit are a 10% gradient. You will have no tears, you will shed them in sweat! This was the longest and hardest climb. The team group hug at the highest peak of the week was an emotional one.”

The 18 Cuchulainn cyclists departed on the day that Chris Fromme was crowned champion of the 2013 Tour De France in Paris. There will be books written about his achievement and his place in history is guaranteed.

“In Dundalk and in Cuchulainn Cycling Club we do not have to look to Chris Froome for cycling inspiration or for motivation in overcoming adversity”, said Weston.

“We will look closer to each other for support and take lessons from Jason Boyle about overcoming adversity.”

The group would like to extend their thanks to Dominic O’Brannigan for his organisation of the events and for the time he put in to make this an experience of a lifetime for those who participated. In total, the group climbed over 11,000 metres in seven days on the following mountains: Mont Ventoux, Col du Galibier, Col du Glandon, Col du Grand Serre, Col d’Ornon and the iconic Ape D’Huez.