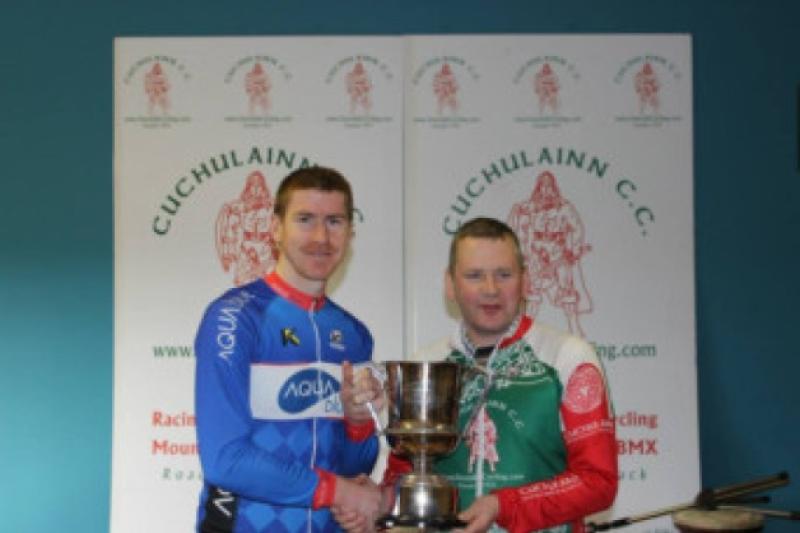 Curran repeated this achievement again in 1943 but the last Dundalk man to win the race was an 18-year-old Karl Dolan in 1991.

That all changed last weekend though as another Dundalk man now has his name on the cup with Bryan McCrystal, riding for Team Aquablue, putting on a tremendous display of power to ride away from every other cyclist to take a solo win by over four minutes.

McCrystal was part of the last bunch to start the handicapped 75km race and he rode away from his fellow A1 riders and straight through the two bunches in front of him.

Oriol Carbo, of the Henry J Lyons Club, lead home the remnants of the day’s break to take second place ahead of Martin Caddow of Dublin’s St Tiernan’s Wheelers.

In the Women’s Race, Bryan’s sister, Eve McCrystal, won in a similar fashion by simply riding away from everyone else.

The race, which had a huge number of Cuchulainn women making their racing debut, had over 20 riders sign on. Ann Dalton took second place, with Monica Merconi in 3rd. Fiona Rogers was the first club person home.

In the A4 race Michael Stafford made the long trip from Wexford, but made the trip worthwhile by taking the chequered flag ahead of Clontarf’s Gavin Duffy. 2013 FPM Accountants Summer League winner Stephen Carry was an excellent third in his first open race. Garry Gorman was first clubman home.

All in a great days racing was had and every rider tipped their hat to Cuchulainn for putting on such an excellent event.

Over 60 people were involved, outstandingly co-ordinated by the Neary family, from standing at junctions in the rain, to serving hot soup and sandwiches after. The local Red Cross and gardaí provided support, thanks to all.