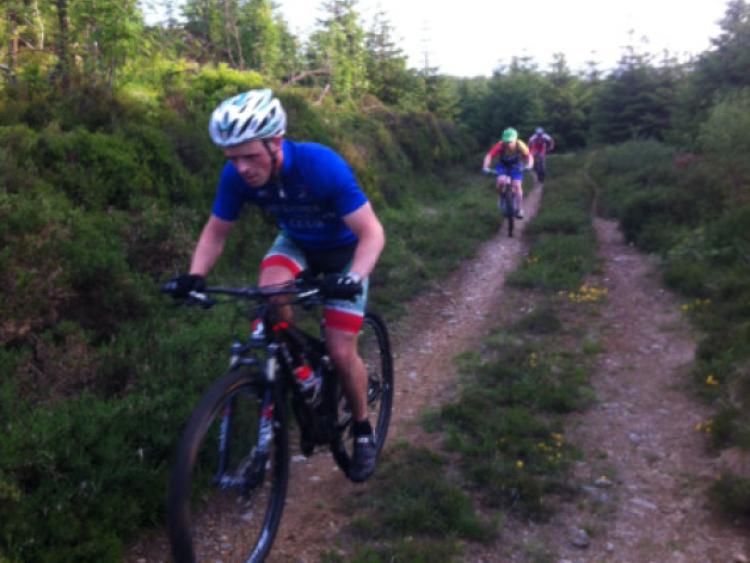 Tuesday last saw round six of the Cuchulainn MTB league take place, for the 3rd week running, on the open mountain.

Tuesday last saw round six of the Cuchulainn MTB league take place, for the 3rd week running, on the open mountain.

The course, very similar to round five - 8.7km in length - had a couple of slight route changes to spice up the course.

The unusual sunny and warm weather that we’ve been having ensured that in spite of the recent rain the mountain remained fairly dry.

As with the previous week’s racing, the riders set off at the time intervals for their handicaps, starting with a 4km fire road and single track climb to the highest point, followed by a nice flowing grassy single track descent to the area locally known as ‘The Castles’, finishing through ‘Aidan’s Canyon’ and the final climb to the line.

Racing was close again, maybe not so close as round five, but all 17 riders finished within 10 minutes with some spirited finishes. There was a noticeable difference in the finish times compared to round five’s, in some cases taking as much as five minutes off times, which goes to show that weather conditions can have an adverse effect on race day performance.

The first casualty on Tuesday was Gary Winterlich who company with his bike on a tricky section of ‘Aidan’s Canyon’ and came down quite heavily. It does help to have Dr Meave Baxter racing in the league who examined Gary once he crossed the line, finding nothing broken, but he will surely have been sore for a few days.

Again a big thanks to time-keepers Sandra O’Hagan and Terry McEneaney for keeping everything honest and enduring the Cooley’s ninja midges.

Round seven will takes place on Tuesday June 25 at 7pm, insect repellent is advisable. All visiting club riders and guests are welcome to compete as long as they hold a current 2013 Cycling Ireland Licence.